The University of Oklahoma Press

OU President David Boren has called OU Press "one of the crown jewels of the University of Oklahoma." Operating for over 90 years, it was the first university press in the American Southwest and only 1 of 4 university presses in the American West at the time of its founding. Most university presses at the time were located at ivy league universities in the east, putting OU on the same level. University presses publish academic research and writing that would not be published by mainstream publishing houses focused on sale revenue. The press publishes approximately 80 books a year, totaling 3,000 since its beginning. Publications include a variety of fields, but most are on American Indians and Western American History.

(left to right) Van Endicott, superintendent of the University Press; Will Ransom, art editor; Savoie Lottinville, director of the Press; and Mary Stith, assistant editor at openhouse of new press building in 1948. 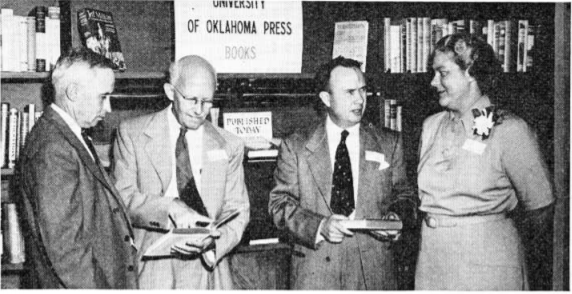 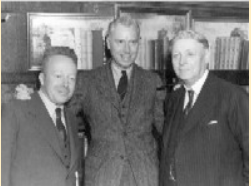 The University of Oklahoma Press was founded by President William Bizzell in 1929 to "teach by means of the printed word" on and off campus. Bizzell wanted to spread the faculty's scholarship, fill out a relatively small campus library, and create a center for academic publishing in the region. Joseph A. Brandt, a Rhodes scholar and editor of the Tulsa Tribune, was chosen by the OU president as the first director of the university press. Brandt later became President of the University of Oklahoma.

The University of Oklahoma Press is not a print shop or printing press. It acts as a publisher that works to "acquire, develop, design, produce, market and sell books and journals ... of scholarly, intellectual, or creative merit, often for a small audience of specialists." Since its inception, this university press has specialized in publishing scholarship about the American West and American Indians, but has expanded into "classical studies, military history, political science, natural science," and other disciplines.

The first publication by the University Press was in 1929, The Terminology of Physical Science by Duane Roller, Sr., a pamphlet on physical science. In 1934, President Bizzell had a book of his own, The Relations of Learning, published by the press. Their "continuous and all-time best seller" came in 1953, The Sacred Pipe by Joseph Epes Brown. From that first pamphlet, the University of Oklahoma Press has published nearly three thousand books, and the press and its authors have won 160 awards and honors.