The Tonkawa Massacre was an event of the American Civil War taking place in the area of modern-day Fort Cobb, Oklahoma in the year 1862. The Tonkawa were a northern Texan tribe of natives, being moved to Indian Territory by the Confederate Wichita Agency, a group specialized in relocating natives. On October 23, 1862 while the Tonkawa were being held in Fort Cobb on their way north, a Union aligned band of natives from various tribes assaulted the agency at Fort Cobb, and slaughtered the Tonkawa. Of the three hundred natives, 137 were killed, and the tribe almost went extinct.

a few of the survivors pf the Tonkawa Massacre with their children in 1898. 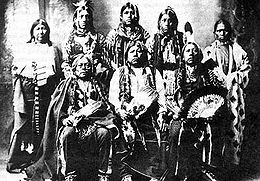 In 1862 the Confederate Witchita Agency, a group dedicated to the removal and relocation of native tribes began moving the small Tonkawa tribe of Northern Texas to the Indian Territory. The Tonkawa had a reputation of Cannibalism, which terrified the other tribes of the plains, leaving them without much in the way of allies, and with many Enemies, namely the Comanche and Kiowa peoples.
As the tribe moved north they faced little difficulty, but once they reached Fort Cobb, Oklahoma disaster struck. Wichita Agency agents housed the Tonkawa along the Washita River, and that night, October 23rd, 1862,

"a small army of Shawnees, Delawares, Kickapoos, Caddos, Comanches, and Kiowas attacked the Tonkawa settlement near the Whasita River, killing 137 women, men and children, more than half the tribe."

The Attack itself also took the lives every member of the Wichita Agency present when the attackers sacked the fort to prevent them from aiding the Tonkawa. Among the dead was Chief Can't-Kill-Him and the rest of Tonkawa leadership.

After the attack the Tonkawa survivors fled south to Fort Griffith, Texas where they remained for the next twenty years. The attack on the Tonkawa was politically motivated. The Tonkawa had acted as scouts for the Confederacy, and before American soldiers against the Comanche and Shawnee Tribes. Additionally, the belief that the Tonkawa were cannibals increased the natives vehement hatred of the tribe and spurred them on to slaughter even the women and children. in 1877, the was a push among anthropologists to study Tonkawa culture and aid the survivors of the massacre, as few members of the tribe remained and it looked like the people would die out. In 1886 they were returned to Oklahoma and moved to Fort Oakland, which in 1894 was renamed to Tonkawa, Oklahoma. The majority of the tribe still live in this area.

By 1930 there were only 86 Tonkawa left, and the tribe looked doomed to extinction. After WWII, Tonkawa fortunes turned and the tribe as grown to double the pre-massacre numbers by The Seventies, and close to 1000 today.