This historic stone building is Fort Wayne's oldest commercial building still standing and the last in the city associated with the Wabash & Erie Canal. Stonemason and building supplies merchant John Brown constructed it in 1852. A native of Scotland, Brown used it as his warehouse and it was located a mere 50 feet from the canal and the towpath (the path that runs alongside a canal on which horses and mules pulled boats). Currently, it appears that the building is vacant and not being maintained. A historical marker is affixed on next to the front doors and another marker is located just a few feet away.

The John Brown Stone Warehouse was built in 1852 and is the oldest commercial building in the city. 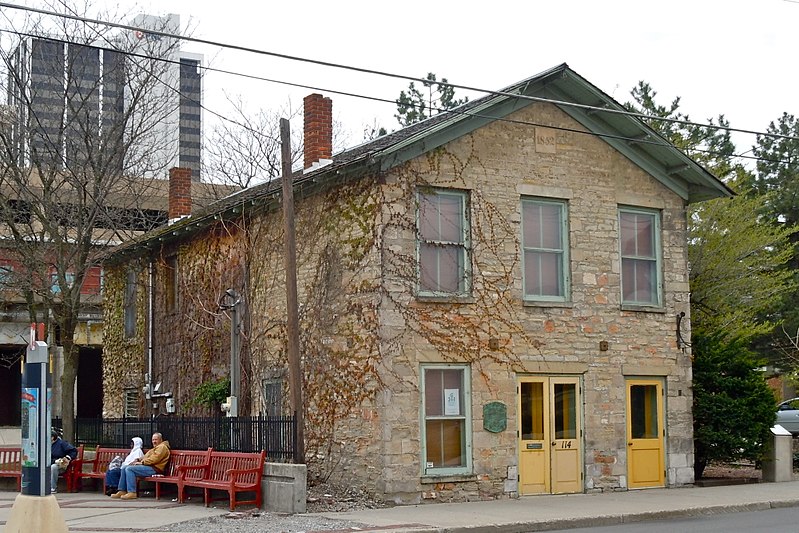 Brown sold the building in 1862 to another merchant, Henry Drover, who continued to use it as a warehouse. The building was associated with the canal until 1881 when the canal ceased operating (it could no longer compete with railroads). The New York, Chicago and St. Louis Railway Company bought it in 1885. The railroad deeded the building to the city in 1971. A local preservation group restored it in 1976 then the organization, what is now called Arts United, moved in the next year. Arts United remained here until 2011 and the building has been unused since then.

This short walk through Fort Wayne begins at the site of the original fort which was constructed in 1815. After touring the replica of Fort Wayne, residents and visitors will be led to the John Brown Stone Warehouse, Fort Wayne's oldest commercial building. The tour continues on to the Allen County Courthouse and other landmarks such as the statue of Major General Anthony Wayne, the McCulloch-Weatherhogg Double House, Freemasons Hall, and the Cathedral of the Immaculate Conception. The tour also includes several museums such as the History Center in the former City Hall building and the African/African American Historical Society Museum. Be sure to also visit the Firefighters Museum a few blocks west of this tour and Baker Street Station.