The Oregon Creek covered bridge was originally located further upstream than where it is located now. A flood in 1883 burst the English dam and caused the creek to rise and wash the bridge away. During the reconstruction of the bridge it was feared it was beyond repairable because when the settlers used oxen to move the bridge into place it turned on its end and was seriously damaged. With the story saying the bridge was built between 1860 and 1862 it serves as a candidate as the west's oldest bridges. The bridge has since been reopened to the public as a site seeing location for the campsite up the river, and allows up to eight tons of weight on a four wheeled vehicle only. 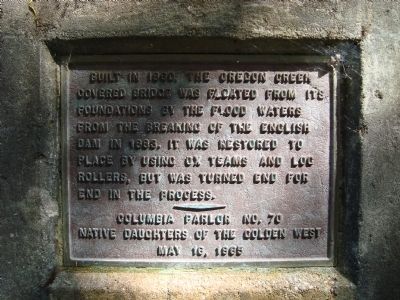 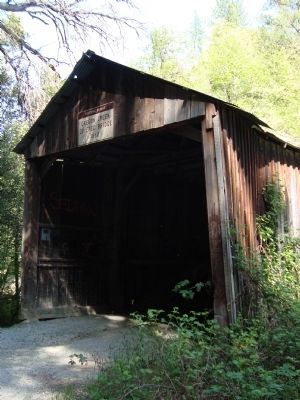 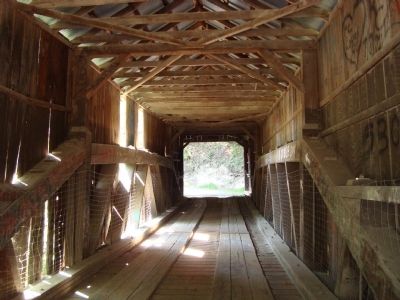 The Oregon Creek covered bridge is a historically significant covered bridge being it is debated as one of the oldest covered bridges in the West as well as its will to live. The bridge was built by Thomas Freeman and was called at the time Freemans Crossings bridge. It is located off Highway 49 and crosses the fork of the Oregon Creek and Yuba river, right in front of the beginning of the Oregon Creek campground. The Oregon Creek bridge marker is on the Allegheny highway just several yards before the turn in the road at the beginning of the bridge. “The bridge is one-hundred-five-foot-long and was washed one hundred feet downstream (Oregon Creek Covered Bridge). The bridge was highly key in transportation for the mining and oil towns because they were so secluded from the central valley towns. Entrepreneurs traveled the bridge selling commodities to miners while young men traveled it in search of work and a new life on the frontier. Covered bridges were unique because resources were limited so they did what they could “They were built at a time when the West had abundant wood and no steel or concrete that could be used to construct bridges across rivers. And, if the wood bridge was covered with a roof, it would last at least three times longer” (Story,2015). At a time where moving west to find gold fast was the key, they wouldn’t have time to always repair and build new bridges.

The need to travel west was in great desire but many mountains and rivers made it tough to terrain and its gold rich hills made it an attractant for many settlers and Americans. This is what lead to the popularity of covered bridges in the West because in the north they were already prominent. Bridges made it easier to travel farther distances at a time and reach further into the pay grounds of the gold mines. Along with bringing in these workers, bridges also allowed for men to be able to travel in larger parties and bring their females west with them. Which before standard means of roads and bridges, traveling with a wife and children was impossible. These advances in technology also went to prove that the western expansion was there to stay.

There are several men that wrote down their account of the flood and the panic that it caused for the settlers around the area. One man named Frank W. Meggers was the district ranger in Camptonville and gave his account of the incident “In 1889, the English Dam above Milton went out, sending a small wall of water, logs, and what-have-you, down the Middle Yuba River at the confluence with Oregon Creek, and it too running full, backed up with water so high that it lifted and floated the 100-foot-long bridge, which drifted downstream and lodged on the high bank in the campground. By the way, this was a toll road until about 1892, including the covered bridge, and owned by the Waymans, who had ranch property further up country. Being practical men, hard workers, jacks-of-all-trades, they raised the bridge, placed log rollers, then, with horses for power and winch using cables, slowly rolled the bridge up the slope on a false framework and put her back on the original foundation.” (Markley, Meggers). This goes to show the way of life back then and the determination to succeed that was instilled in every American. The people of the time had little to nothing to work with but still overcame a devastating flood, and moved their bridge back upstream one hundred feet using what they had. The life in the western frontier was harsh and abrasive but the people came together working as once to secure a brighter future.

Today the people of Camptonville are proud of the bridge that has stood the test of time. There is a campground built up stream from the bridge, while advertising the bridge as one of their main attractants. The bridge went under construction in 2016 to make it drivable again and it was reopened in 2018 for smaller vehicles. Getting to drive threw the same road and bridge that settlers came west on creates a lasting nostalgia that the community is set around. It shows much more than just a covered bridge in the eyes of the locals; it stands for invention in the frontier while showing complexity and dexterity by the people who moved their originally. The bridge certainly created a lasting legacy for the town and one that won’t soon be forgotten.