Built in 1762, this humble tavern was originally a small fort for Indian trading and was later bought by Jean Bonnet. The tavern has played a role in historical events including the attack on Fort Duquesne, the Whiskey Rebellion, and the Civil War. Today, the Jean Bonnet Tavern

A side view of the Jean Bonnet Tavern taken in 2005. Courtesy of Wikipedia. 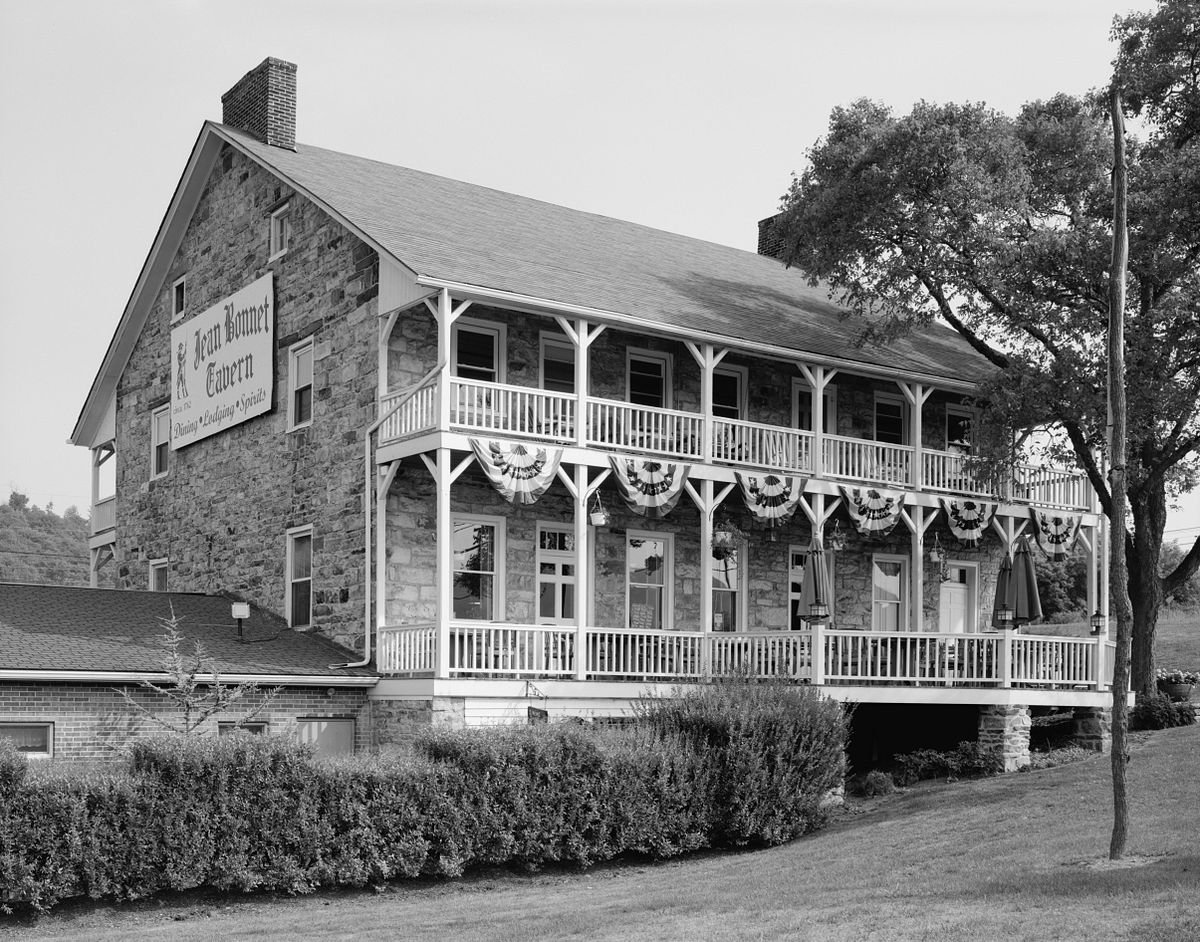 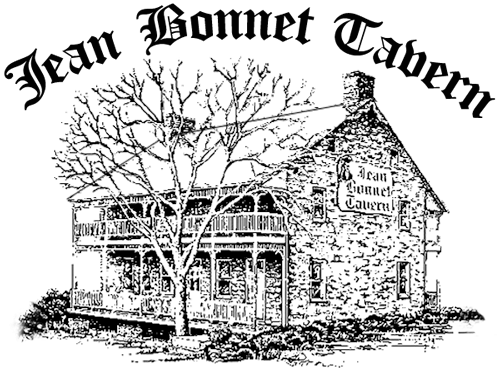 Here is the historical market that sits in front of the tavern. It gives a short history of what occured during the Whiskey Rebellion. Courtesy of explorepahistory.com 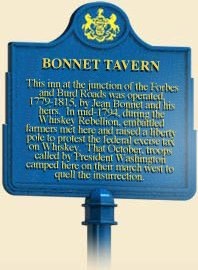 This is a map from the revolutionary war era. It gives a sense of the layout during that time period. The tavern is located at the junction of the Forbes and Burd Roads. Courtesy of explorepahistory.com 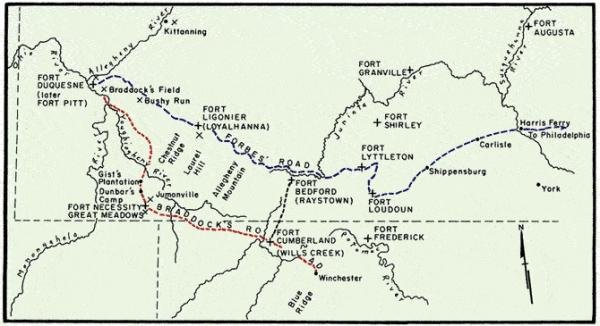 This photo was taken around the later 1800s to the early 1900s. The women are wearing dresses from that time period while the young boy is riding a horse. Courtesy of the Jean Bonnet Tavern Website 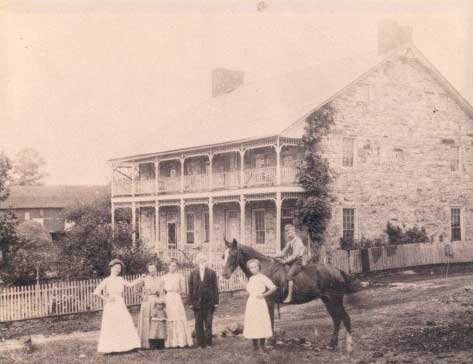 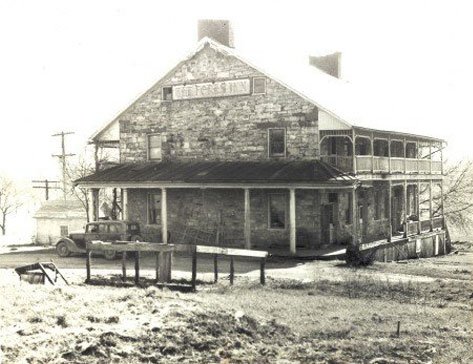 The Jean Bonnet Tavern is one of the better-known places when travelling through the town of Bedford, Pennsylvania.  Although it is open to the public as a bar, diner, and place to stay, it has numerous deep historical ties.  The history goes as far back as the French and Indian War which occurred before the United States was founded.  The rich history of the tavern intertwines with many major historical events of America itself.

The tavern is located roughly 4 miles away from the small town of Bedford, Pennsylvania.  It was built by the French in 1742 as a small fort and trading post to carry on trade with the Shawnee Indian Tribe. The Forbes Expedition of 1758 stopped by the fort prior to the attack on Fort Duquesne.[1] Following the French and Indian war, the fort was abandoned and shortly after, a building was constructed at the sight.  The building happened to be built on top of the thick stone walls of the French fort.  Jean Bonnet bought the property from the British in 1779.  The tavern is located at the edge of the western frontier, and because of this, the Jean Bonnet Tavern became particularly successful.  Many of the people who were about to travel west over the mountains stopped into the tavern to prepare themselves for an ambitious journey.  The food was just as good now than it was back then, so soldiers from both sides of the Revolutionary War stopped to eat. The tavern even survived the Indian raids of 1780 which devastated the area.

Jean Bonnet’s Tavern was a gathering spot for many of the farmers involved in the Whiskey Rebellion. Federal troops were sent to suppress the rebellion and a large number of these troops, and George Washington himself encamped near the tavern. The tavern also happens to be linked to one of the darkest times in American history, the Civil War.  During the week before the battle of Gettysburg, Pennsylvania militia troops skirmished with Confederate cavalry in Everett, which is roughly only 10 miles to the east [2]

With all the history that has accumulated at the Jean Bonnet Tavern, it seems as if some of it remains.  There are two documented hangings have taken place within the building.  In 1758, A suspected French spy was hanged and buried in the basement, where the restaurant now stands.  His body was buried beneath the floor so that the French would never know of his fate.[3] A few years later, the frontier justice was extremely harsh and sentenced multiple people to be hung there.  In 1980, as the tavern was being renovated, a human skeleton was found under the floor.  Each of these cases have been thought to have contributed to some paranormal activity.  Because of this, The Jean Bonnet tavern has seen time on the Biography Channel’s “My Ghost Story” in 2012.   There have also been multiple books such as The Pennsylvania Ghost Guide, Vol. II. Written by Patty Wilson, that have many documented stories of paranormal activity.  There is a famous ghost story called the “Story of the Drunk Man”.  The story goes that the bartender was working when a few of her friends came.  The bartender decided to drive his friend home, and decided to lock up.  The Bartender returned to finish cleaning up.  When she returned, she saw a man sitting in the bar, drinking and playing solitaire.  She thought it was impossible to get in because she locked the door.  She quickly unlocked the door and hurried into the bar to find that no one was in there.  They checked all throughout the building but there search came up short.  The Bartender was so upset that she does not speak of the story anymore.  This short story is an integral part of the Jean Bonnet Tavern experience because it shows that it is not just an old historical site, but a lively place where history still lives!

This wonderful landmark is a great way to experience an old time feeling and it also contains a vast amount of history.  The Jean Bonnet Tavern has been through many turning points of history such as the French and Indian War, the Whiskey Rebellion, and the Civil War.  Not every historical site from the Lincoln Highway is still around, and that is why it is such a great place to go.  So take some time to stop on by and experience the homely atmosphere, the historical feeling, and a possible encounter of paranormal activity!