Dedicated to the infamous Nathan B. Forrest who quickly rose through the ranks of the Confederate Army to Lt. General due to his tactical expertise. Originally from Tennessee by way of Mississippi, Forrest came to Selma, Alabama upon his defeat at the hands of Union Major General James H. Wilson at Ebenezer Church and was a last ditch effort to maintain the local Confederate industrial stronghold, despite his forces being mostly scattered across the state. His loss allowed the Union to pierce the heart of the Confederacy and to cut off the supply of gunpowder and weapons which the city provided. Though he has been known for the old adage "get there first with the most men," he is also known for his untold brutality against captured African American soldiers. This controversial monument can be found in the historically significant Old Live Oak Cemetery.

Photo taken of the Nathan Bedford Forrest Monument, erected in Old Live Oak Cemetery in 2000. Due to the bust being stolen in 2012, there have been efforts to move the monument to a private location. 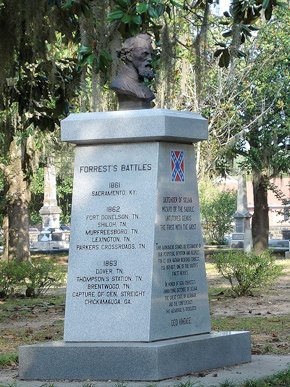 Lt. Gen. Forrest, rightly called the "Wizard of the Saddle," would reportedly go on to become the first grand wizard of the Ku Klux Klan in 1866. Controversially, his memorial also dubs him the "Defender of Selma." 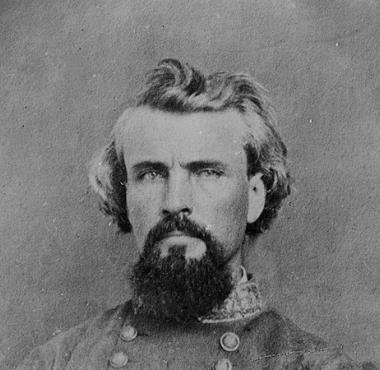 A picture of the Selma Naval Foundry after Forrest's defeat. While in operation, the foundry produced guns, ammunition, and plate steel (for building ships) for the Confederate Army. 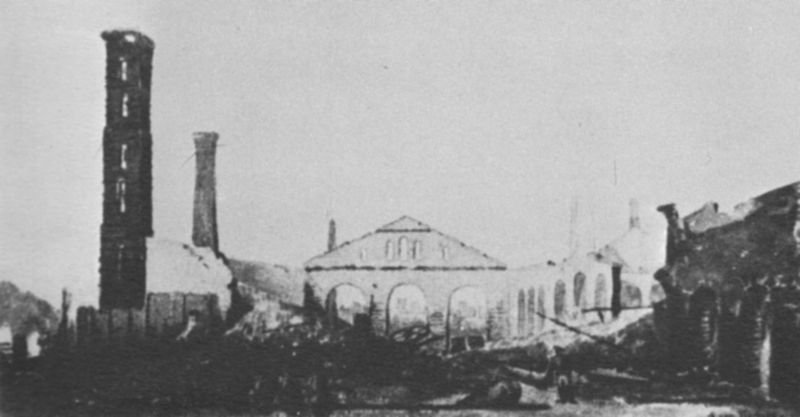 Nathan Bedford Forrest served as a cavalry officer in the Confederate Army during the full run of the Civil War. He was involved in several major battles and campaigns - Shiloh, Chickamauga and the Vicksburg Campaign, where he and his men successfully raided Union supply and communication lines and terrorized Union forces. Most notably, prior to the Battle at Selma, he was involved in the Battle of Fort Pillow, known for the massacre of African American soldiers in the ranks of the captured Union forces.

Forrest, due to his tactical expertise and his diligence in battle had a hugely successful military career in the Confederate Army, even before his promotion to Lt. General, which came in February 1865. A little over a month later would see the newly promoted Forrest injured in his first clash with Major General James H. Wilson at Ebenezer Church. Working quickly to gather some force to head off Wilson's advance into the South, he was left with roughly 4,000 under-trained men, consisting of mostly elderly men and young boys, to defend Selma, a major industrial center from the approaching Union Army. A variety of circumstances - the city's scant outer defenses, unfinished internal defenses, the fact that most of Forrest's men were scattered across the rest of the state - made his ultimate defeat at Selma inevitable. Wilson's forces then destroyed all facilities, equipment, and supplies that made the city useful to the Confederacy.

Though Selma, Alabama is the site of Forrest's last battle, as his forces were disbanded in May upon the Confederacy's surrender, this monument is controversial for a number of reasons. Forrest's participation in what is now called the Fort Pillow Massacre, his prior job as a slave trader in Tennessee, his eventual heading up of the KKK, and the fact that it was erected on the anniversary of "Bloody Sunday," marked by violence against Black protesters during the Voting Rights March in 1965, all add up to this memorial being highly controversial. In 2012, the bust on top of the monument was stolen and has yet to be returned, though actions to replace it in 2015 has reignited the tension, both locally and nationally, in the debate over the honoring of particular significant figures of the Civil War and of American history.