Fort Schuyler was constructed during the aftermath of the War of 1812. During the American Civil War, Fort Schuyler was used as a prison by the Union Army and at one point held up to five hundred Confederate prisoners of war. The walls of the fort have been well-preserved, and Fort Schuyler became home to Merchant Marine Academy in 1938, an institution that is now part of the State University of New York (SUNY) Maritime College campus. The former military installation is home to the university's Stephen B. Luce library, a museum, and the university's Marine Transportation Department and Administrative offices.

This image shows the southern main gate of Fort Schuyler on the SUNY Maritime College campus. 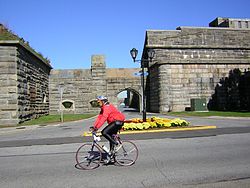 This a portrait of Major General Philip Schuyler of the continental army, in whose honor Fort Schuyler was named. 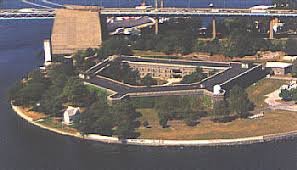 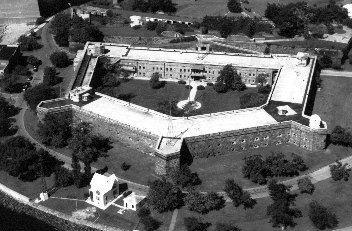 Construction began on Fort Schuyler in 1833, shortly after the end of the War of 1812. The Fort was officially completed in 1856. It was built on a 52-acre tract of land purchased by the federal government from William Bayard. Fort Schuyler was named in honor after Major General Philip Schuyler of the Continental Army. Major General Philip Schuyler began his military career during the French and Indian War. General Schuyler also fought on the side of the American Colonies during the Revolutionary War. He was later elected to Congress as a United States Senator for the State of New York.

The intended use of Fort Schuyler was to close off the western end of Long Island Sound, protecting New York from a sea attack. The fort was made of granite and shaped like an irregular pentagon. It was the finest example of the French fortification style for the purpose of both sea and land defense. In December 1845, the fort was ready to be armed. There was a wide range of seacoast and garrison guns, as well as bastions of the waterfront. The fort featured two tiers of guns and a drawbridge. There were also tunnels created so that riflemen could fire from its sides.

On January 17, 1861 Fort Schuyler was garrisoned by engineers who would occupy the fort until 1865 when it was turned over to artillerymen. During the Civil War McDougal General Hospital was located at the fort. Aside from soldiers, the fort also houses laundresses and the wives and families of married soldiers. They lived in a separate one-story frame building on the property. The officers were housed in a South landward barracks. The only bathrooms were located in the hospital. Fort Schuyler had excellent sanitation. There were no sicknesses or death from sanitation issues from 1868-69.

In 1875 the New York State Merchant Marine Academy occupied the fort. The last garrison officially left Fort Schuyler in 1934. Plans began to turn it into a home for the Merchant Marine Academy. Restoration began in 1934 with a new roof and a completely transformed interior. It was also modernized for school purposes. Electric, water, and steam lines were also added throughout the building. Today Fort Schuyler stands as a part of the State University of New York, Maritime College campus in New York. It currently houses a museum in tribute to the history of Fort Schuyler, the university's Stephen B. Luce Library, and the Marine Transportation Department and Administrative offices. The state of New York acquired the property in the early 1900s and dedicated it to the college (SUNY Maritime College).