Battle of the Severn Marker 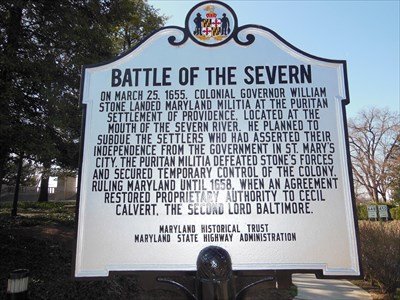 "The Battle of the Mouth of the Severn" by James Edward Kelly Painting executed c. 1876-1881; source, the New York Public Library 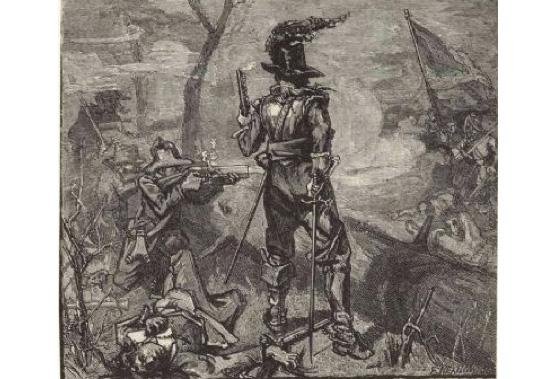 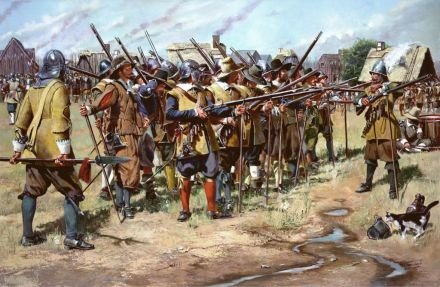 In 1632 Cecil Calvert and his family were granted the colony of Maryland by King Charles I. During the tension and aggression of the religious wars in England, Maryland was meant to be a religious escape for Catholic royalists. Calvert did not want to alienate the Protestants or Catholics, so he placed a Protestant, William Stone, as Governor in 1648. This helped solidify Calvert’s legitimacy. Calvert offered nonconformists Puritans, or Protestants, in Virginia land and guaranteed freedoms in Maryland. This new territory was called Providence, located in present day Annapolis. The unintended consequence of this was that the number of Catholic citizens decreased, while the number of Puritans increased. This led to Puritan dominance of the ruling body in Maryland. The tensions would only grow from here.

On March 21, 1654 Governor Stone insisted that all citizens take an oath of loyalty to Lord Baltimore, those who did not were to have their lands confiscated within six months. The Puritans of Providence opposed and made their grievances known to the Commissioners of Parliaments. Later that Spring, Oliver Cromwell was declared Lord Protector in England and declared that all people must submit to the Commissioners in Parliament. This caused resistance and pushback from Governor Stone who denied the Commissioners of Parliament as the legitimate government of Maryland. He organized the St. Mary's militia and ordered them to seize ammunitions and arms for a planned attack on Providence.

In response, the Providence Puritans established a war council led by Captain Willian Fuller on March 23, 1655. Two days after the creation of the war council, the Battle of the Severn begins. The battle is fought at the mouth of the Severn River at Horn Point, near Fuller’s property. Fuller’s army drove back Stone’s army to the end of the point. The battle itself was over in less than thirty minutes. The Battle of Severn involved about four hundred men, nineteen of which were killed. Four Catholic prisoners of war were executed on site. The Puritans effectively gained control of the government, recognizing Baltimore’s proprietorship, restoring religious tolerance in between Catholics and Protestants. This marker is the only physical marker regarding this battle and its location.

Battle of the Severn. waymarking. April 05, 2013. Accessed May 08, 2019. http://www.waymarking.com/waymarks/WMGRZX_Battle_of_the_Severn_Annapolis_MD.