Founded in 1948, The Ohio Railway Museum is one of the oldest railroad museums in America. The museum began with the acquisition of Ohio Public Service Interurban Car #21, which is now listed on the National Register of Historic Places. The museum is designed to educate through displays and demonstrations, the role and effect of the railroads in the life of the people and businesses of Ohio and the United States. The Columbus, Delaware, and Marion Railway was formed in 1901 to establish local and interurban passenger and freight service connecting Columbus, Worthington, Delaware, and Marion over 60 miles (97 km) of track. It also operated service to Bucyrus through the Delaware, Marion and Bucyrus Railroad on an additional 20 miles (32 km) of track. The company filed for bankruptcy in March 1933 and abandoned its rail lines later that year. Eventually, the interurban rail service was replaced by bus service. The CD&M Electric Company was merged with the Reserve Power Company to form Marion-Reserve Power Company in 1937. The Ohio Railway Museum now operates on the former Columbus, Delaware and Marion railbed and right-of-way. The museum's collection includes a the last CD&M interurban parlor car #501, nicknamed "The Red Bird." Until the late 1970s the museum also operated the Norfolk & Western #578 Pacific-class steam locomotive.

If you love trains, Ohio Railway Museum is the place to be 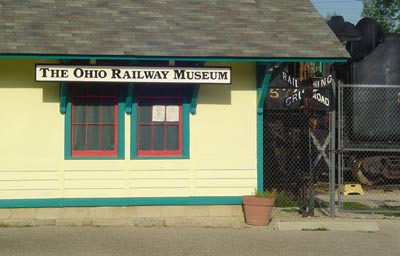