Moore College, a building that is a part of the University of Georgia was built in 1874-1876 and was named after Dr. Richard D. Moore. The structure was occupied by the College of Agriculture and Mechanical Arts until 1909. After this, the building was used by the physics, engineering, and astronomy departments all the way up to 1959. In 2001 it was rededicated and remodeled for the Honors Program. 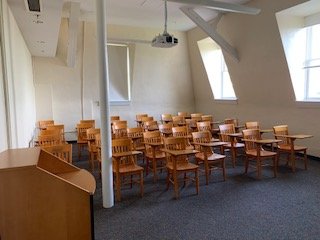 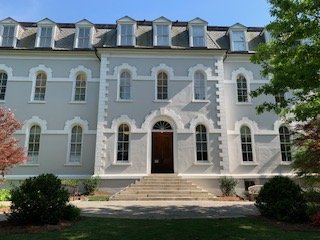 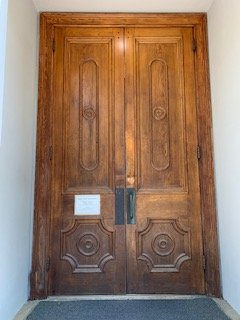 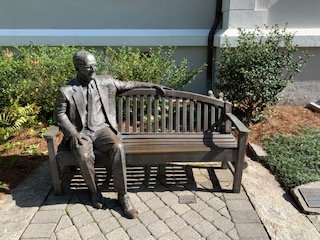 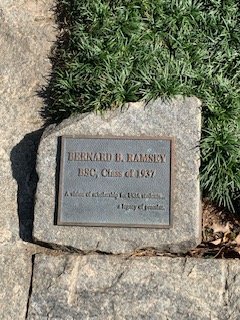 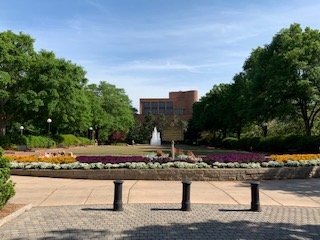 The building is notable architecturally as the only Second Empire Style building on campus. Notable elements of this style include the building's arched windows, a mansard roof with dormer windows, and quoins. There is a high basement, with two stories above, and an arched double doorway.
Leading up to the entrance of the main arched doorway there are two benches that are dedicated to the honors building. On the right there is a standard bench dedicated to the Honors Program Advisory Board from 2010. As well on the left side of the stairs entrance is another bench, with the sculpture sitting on it. The sculpture, of Bernard B. Ramsey BSC, Class of 1937, was sculpted by Teena Stern & Don Haugen on October 1st, 2004. A quote accompanies the plaque of the sculpture that says “A vision of scholarship for UGA students...a legacy of promise”.
Towards the back of the Moore College building is another area that was dedicated to a former UGA alum. The back courtyard is dedicated, with a plaque within a stone walkway to Charles Latimer Gowen, who was also a Georgia State Representative, it also include an inscription that reads “True son of the Red and Black”. The courtyard dedication plaque was donated by the family of Charles Latimer Gowen as the inscription says “Given by his family in support of the UGA Honors Program.” Since the building was not the Honors Program building until 2001, it is safe to safe the courtyard was not dedicated until after that time.
The Moore College building also stands right next to Herty Field, which would become the place of the first intercollegiate football game played by UGA. Since Moore College was not built until 1874 and the first game did not take place until 1892, Moore College has stood longer than one of the most revered and beautiful places on campus. On the upper floors of the building, where the windows allow view, you have beautiful views of Herty Field and the fountain, one of the most popular places on campus.
The interior of the Moore College building also shows a mix of historic and modern styles. One such of the rooms is the upstairs classrooms. The classroom is filled with old, wooden single seat desks and the same arched windows that were built when the building was first erected. The more present day renovations are the projector attached to the ceiling of the room, and the adjustable screen that will come down for the projected image and the white board.
Even though Moore College was built in the late 1800s (1874, to be exact) it has come a long way in additions and renovations since then. The arched wooden entrance doors and the arched windows still remain, but added to them are more updated features like projectors and retractable screens and computers. Outside the building there have been several dedications to the, what would become, the Honors Program building. Two benches, one with a sculpture residing on it, as well as a courtyard dedication in the rear of the building. A building that was gifted in part from the City of Athens, and named after Richard D. Moore, Moore College has withstood the test of time, being re-purposed over its history and having a thriving campus grow even more beautiful around it.