The Zion Reformed Church of the United Church of Christ has stood at the corner of Main and Liberty (originally German) Streets since its construction in 1813. The congregation had existed in the area since 1778, drawing from the growing local population of immigrants from the Germanic provinces of Europe. The church remains in operation today and belongs to the Mercersburg Association of the Penn Central Conference of the United Church of Christ. The church is notable as a historic site for a number of reasons. First, it is one of Chambersburg’s three “rose rent churches” (along with The Presbyterian Church of Falling Spring and the First Lutheran Church), each of which pays the descendants of town founder Colonel Benjamin Chambers the annual rent of a single rose. Second, the building itself is an excellent example of Georgian architecture from the early nineteenth century and in addition to serving as a house of worship contains a number of antique chandeliers and displays on the church’s history. Finally, the church served as the area’s first Sunday school and, because it was for many years the town’s largest venue, hosted a number of events featuring prominent figures. The church is currently open for regular religious services on Sundays and by advanced request. Its annual “Rose Rent” service is held on the second Sunday of every June. 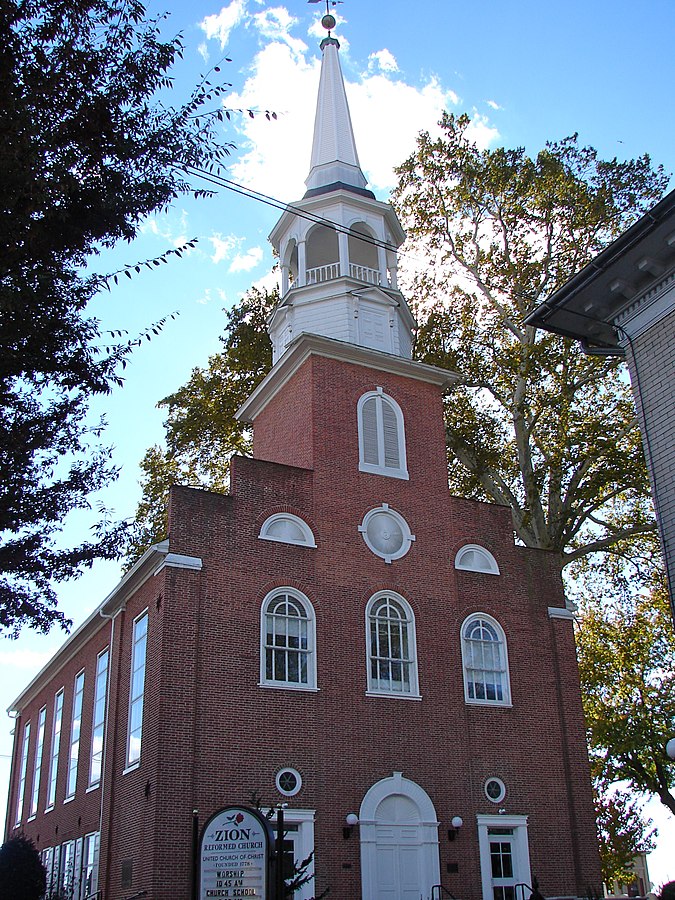 View from Zion Reformed Church's steeple in 1877. Courtesy of the Library of Congress. 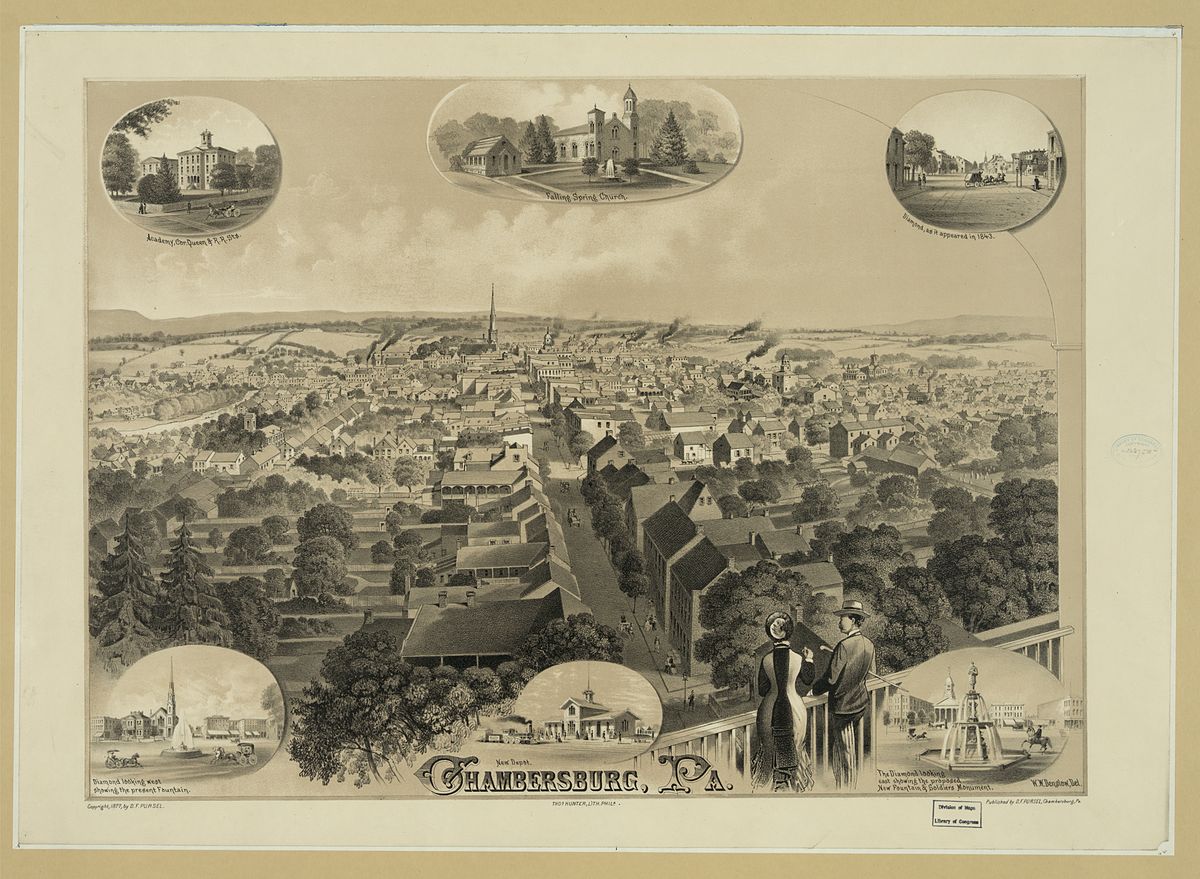 The German immigrants to Chambersburg that formed the church’s original congregation met for the first time in 1778 at Nicholas Snider’s tavern on the northwest corner of the Diamond (now known as Memorial Square). Eager to encourage further settlement in the town, however, Chambersburg’s founder Colonel Benjamin Chambers deeded land to the congregation in 1780 for the construction of a proper house of worship. The first structure, constructed from logs, survived until 1813 when the congregation completed construction of the one that currently stands at the site (a Georgian-style building that includes a 156-foot steeple). The congregation significantly remodeled the interior in 1835 and again in 1847 (and have made other smaller upgrades over the years). These changes further enhanced the structure’s utility as a venue for large local events, many of which took place over the course of the mid-nineteenth century when the church had the largest auditorium in town. Most notably, the Catholic Archbishop John Hughes chose the church as the venue for his speech to the residents of Chambersburg in 1842, and Speaker of the House (later Vice President) Schuyler Colfax did likewise during his visit to the town in 1867. The remodel also made it possible for the church to open a Sunday school in 1829 (the area’s first), which the congregation made available to all of the county’s residents regardless of denomination. Unfortunately, it also prompted the congregation to remove a four-tiered Waterford crystal chandelier purchased at the time of the church’s construction and replace it with oil lamps. The chandelier remained in storage until the congregation’s bicentennial, when several congregation members volunteered to have it restored and remounted. It was lit for the first time in over a century during the Christmas Eve services in 1977, and is relit for the congregation’s Thanksgiving Eve and Christmas Eve services every year.

Chambersburg’s founder Colonel Benjamin Chambers deeded the land upon which Zion Reformed Church stands to the local German Reformed congregation in 1780 in an effort to encourage further European settlement in the area. The congregation had been meeting in Nicolas Snider’s tavern at the northwest corner of the town square (known then as “the Diamond,” now Memorial Square) since 1778, with Reverend J.C. Faber of Hagerstown, Maryland serving as their first minister. The congregation’s agreement with Benjamin Chambers for the plot at the corner of Main and German Streets in 1780 included a stipulation that the church pay Chambers, his wife, and their descendants a single rose as rent on an annual basis in perpetuity, a unique distinction shared by only two other religious institutions in the town (The Presbyterian Church of Falling Spring and the First Lutheran Church). The first building constructed at the site was a small log structure, which remained in place until the congregation finished construction on the current church in 1813 (construction began two years earlier). The original church was sixty feet long and forty-five feet wide, and is a classic example of the Georgian architecture popular at the time, with a red brick exterior, two tiers of windows, and a 156-foot steeple that towered over the town after its completion. Renovations to the building in 1835 and 1847 added new windows and doors, shortened the steeple by 15 feet, and extended the building by a further 75 feet (another extension lengthened it by 10 feet more in 1883).

The various changes that the congregation made to the building over the course of this period made it an ideal location for both the community Sunday school the church formed in 1829 and any local events that required a large venue. The 1847 upgrades were particularly useful in this regard, raising the ceiling in order to accommodate a second level inside the church so that the congregation could run their Sunday school on the bottom level and keep the top level free for use as an auditorium. John Hughes spoke in the church prior to these changes, while Schuyler Colfax spoke twenty years later. There is little indication of how the residents of Chambersburg received Hughes’ speech in 1842, but the soon-to-be anointed bishop of New York City no doubt enjoyed his return to the town in which he had first settled upon his immigration to the United States from Ireland in 1817. In the years following his speech at Zion Reformed Church, Hughes would go on to become a champion of the growing Irish immigrant community in the United States and, in 1850, the first archbishop of New York. Colfax delivered his speech to the town (which attendees evidently received well according to local papers) at a similarly opportune time in his career. The year after he spoke at Zion Reformed Church in 1867 he was elected to serve as Ulysses S. Grant’s first Vice President.

The Zion Reformed Church is significant not only as a well-preserved example of Georgian architecture from the early nineteenth-century United States, but also as an institution with a unique place in local history. As home to the largest auditorium in town Zion Reformed Church played host to some of the area’s most prominent visitors, figures who witnessed some of the most prominent events of the period and whom the residents of Chambersburg no doubt hoped could interpret those events for them. As one of the town’s three “rose rent” churches, however, Zion Reformed Church is part of a singular local tradition that has remained in continuous practice for nearly the entire history of the town’s existence. Like its companion churches, Zion Reformed Church holds annual “rose rent” ceremonies to deliver its payment of a single rose to a descendant of Benjamin and Jane Chambers. By doing so, the church represents a living connection between past and present in Chambersburg.

Visitors interested in learning more about that connection can visit the church during regular worship services or upon advanced request, during which time they can view the building’s historic interior and the historic items the congregation has on display. The over two-hundred-year-old structure has at various times sheltered congregants, local residents, and prominent historical figures, and promises to do so for some time to come. Architectural enthusiasts can admire the building’s uniquely preserved Georgian features and the carefully maintained facilities inside. Those more interested in a historical lens can enjoy hearing more about the congregation’s legacy as one of Chambersburg’s oldest and most prominent religious organizations.