The battle at Round Top was fought on the second day of the Battle of Gettysburg July 1-3 1863. This battle was decisive in that the 20th Maine repelled multiple attacks by larger Confederate forces. The day was won when Col. Joshua Chamberlain ordered a bayonet charge. 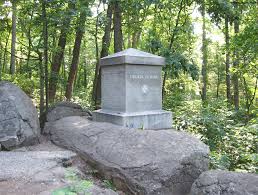 The Battle of Little Round Top proved to be an important victory for the Union forces. It was the second day of fighting at Gettysburg July 2,1863. The Confederate forces totaling 650 men, who were led by Colonel William Calvin Oates. The Union forces were on the extreme left of the Union line was 360 men of the 20th Maine led by Colonel Joshua Chamberlain, who knew that if they fell back then the Union lines would be flanked. Colonel Oates who regiments were of the 47th and 18th Alabama, Oates was ordered by General Hood to take the heights of Little Round Top and turn on the flanks. When the two sides met on that hill the carnage was fierce.The Confederates who out numbered the Union forces and kept trying to flank the line by performing several charges. The 20th Maine held their ground, heavy casualties were taken on both sides. when finally almost out of ammunition and have only half of their original numbers Chamberlain ordered his men to execute a bayonet charge, the Confederates were surprised by such a maneuver that they broke ranks and retreated. Colonel Chamberlain was later promoted for his courage under fire. Total causalities of Oates men were about half with the 18th Alabama taking must of it. The Union forces took about the same were the 20th Maine lost half of their regiment.