A marathon trail connecting across the Chicago Southland from Indiana and the Chicago Lakefront to Lemont, Illinois and the I&M Canal Trail. 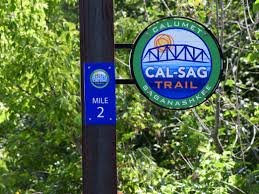 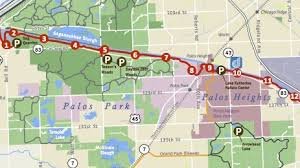 The Cal Sag Trail is located from Archer Avenue near Lemont, Illinois and extends for 26 miles all the way to the Indiana border. The trail opened its western segment on June 2015 and sections of the eastern segment will open from Fall 2017 up till Spring 2019. The western segment is the Cicero Avenue in Alsip to Rt. 83 in Lemont to Cicero Avenue to the Burnham Greenway. The whole trail has about 185,000 Southland residents that live within a mile of the trial and 1.2 million live within 15 minutes of the trial. The trail is long and invites many people with its short distance to drive there.

The Cal Sag Trail is being built between public and private partnerships between towns, business, and community groups. The community groups are working towards a Triple Bottom Line. The triple bottom line is an accounting framework with three parts: social, environmental and financial. In order to complete this trail it would take about $21 million in order to complete. Most of the road of Cal Sag Trail is set aside by the Metropolitan Water Reclamation District and it’s only for recreational use. This is true because of the fact there are a lot of people that visit Cal Sag Trail today to run, bike, and/or recreational use.

The three principles of Triple Line Bottom is that it is supposed to strengthens local economies, it improves people’s lives, and protects natural and historical legacies. Three examples from the Cal-Sag website are that “The Cal-Sag Trail turns a working waterway into a waterway that works for everyone, Cal-Sag Trail preserves and enhances the natural and historical treasure of the Cal-Sag Channel and Calumet River and their communities, and the trail development along the Cal-Sag and Calumet River also opens the waterway to fishing, kayaking, birding, barge watching.

The trail is 3.7 million square foot and it serves anyone who visits without any cost. The trail could be used as a way to enjoy getting fit or as a “gym.” The trail had around 80,000 in Palos Heights in the western segment in the first year of operation. The fact that Cal-Sag Trail provides twice as many access points to communities and is eight miles longer than Old Plank Road Trail shows factors in to its success of activity. Another fact is the small business owners consider recreation opportunities when they are trying to get a office.

The success of the construction of the trail can be given to the government because 80% of the costs are paid by federal grants. With the money used by federal grants it the trail connects to five regional trials that connects up to more than 100 miles. The Cal-Sag trail also links together six forest preserves.

The board of Cal-Sag trail consists of Rich Ferrin from Orland Park, Bill Poore from Palos Heights, Julie Sklom from Blue Island, Karen Switalski from Tinley Park, and Jim Tomaszewski from Harvey. The most notable mentions from the board are President, Debbie Stoffregen from Oak Lawn and Executive Director, Steve Buchtel.

Overall, the trail is still in development and is soon to be finished. A recent board meeting to talk about the development of Cal-Sag happened on May 28.