With an original section dating back to 1695, the Wentworth-Coolidge Mansion is thought to be the only surviving home to a colonial Royal Governor in the United States. Portsmouth native, Benning Wentworth, was appointed Royal Governor in 1741 and served in that capacity until 1767. He moved into what was once a simple fisherman’s home that he had expanded into a 40-room mansion. The mansion was later purchased by Boston artist, J. Templeman Coolidge III, in 1886 and transformed into an artist’s colony until it was donated by his widow to the state of New Hampshire in 1954. It was fully restored in 1966 and designated a National Historic Landmark in 1968. The mansion and grounds are now administered by the New Hampshire Division of Parks and open to the public May through October.

Original sections of the Wentworth-Coolidge Mansion date back to 1695. 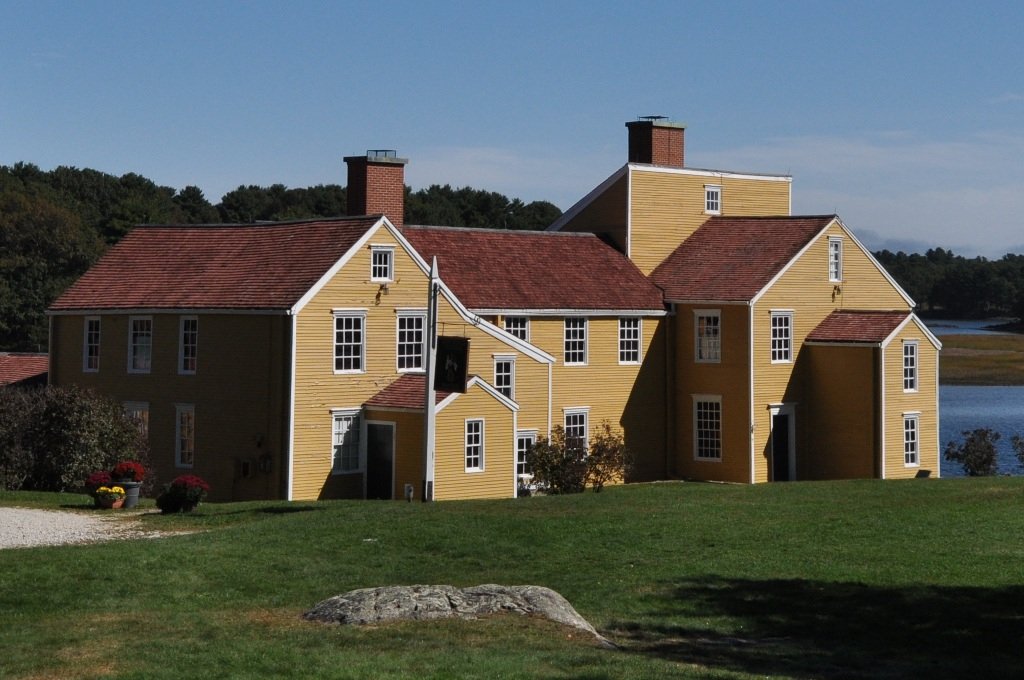 Art and architecture meet at the Wentworth-Coolidge Mansion. 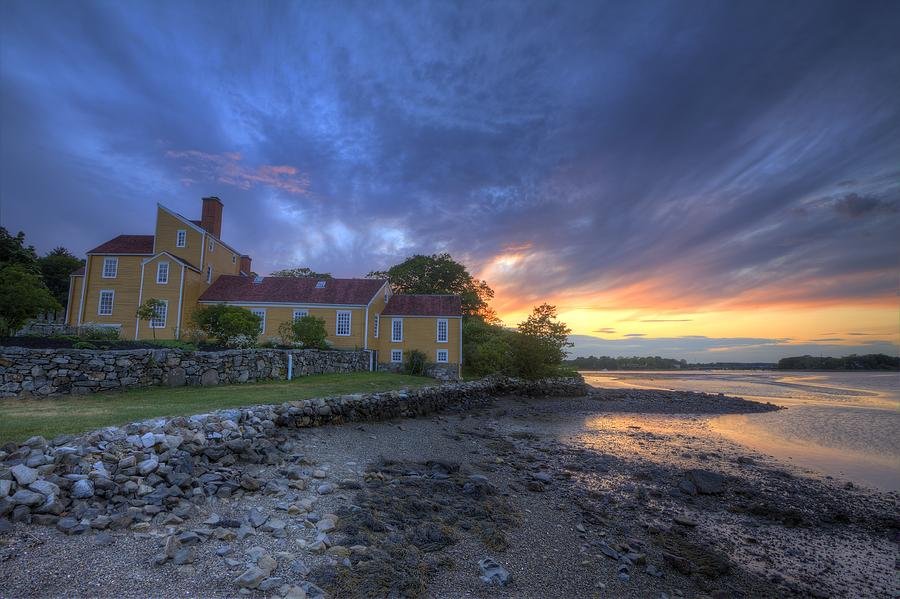 This aerial shot reveals the true size of the mansion. 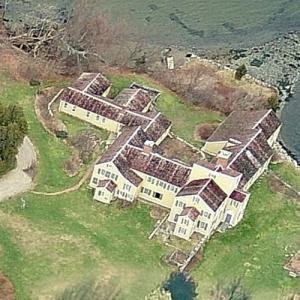 One of the many bedrooms located within the mansion. 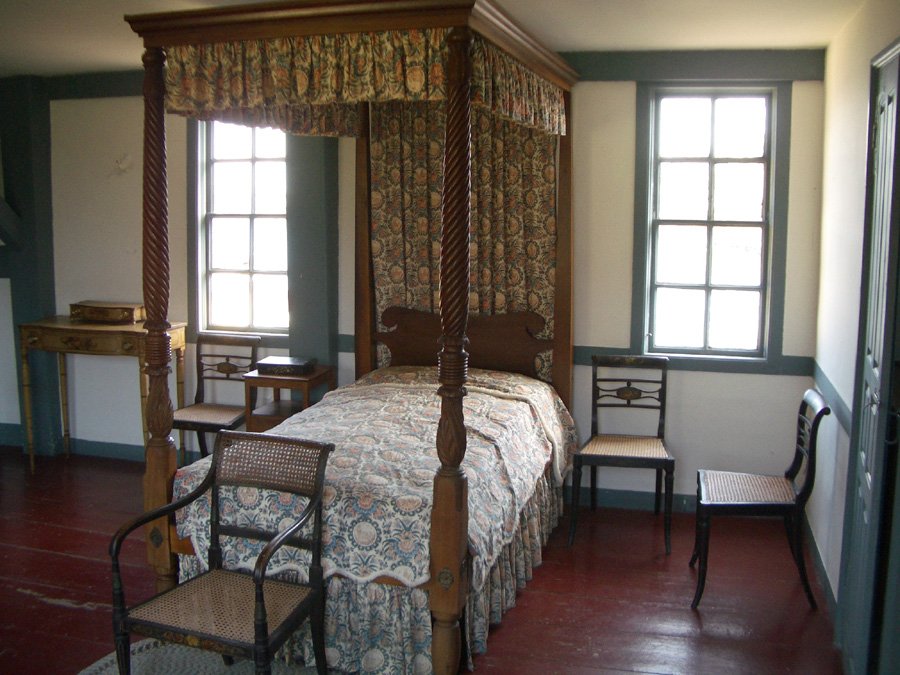 These visitors enjoy the mansion's annual Lilac Festival which occurs in late May. 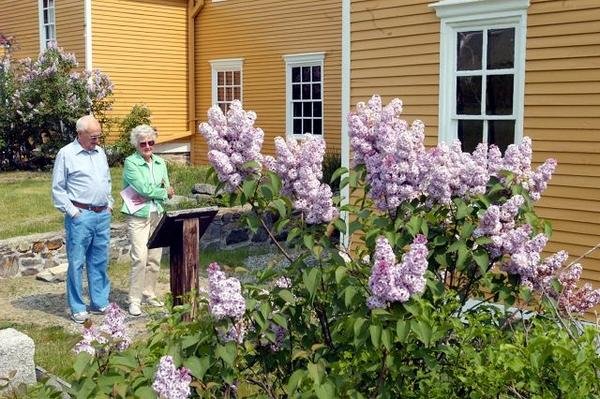 In 1741, King George II separated the colony of New Hampshire from Massachusetts during war with Spain, referred to as the War of Jenkins’ Ear.  In doing so, the Crown required a colonial governor for the new colony and the king appointed Portsmouth native and Harvard graduate (1715), Benning Wentworth.  At the time, Portsmouth, as its name implies, was an important import-export center, intimately involved in the era’s “triangular trade.”  The Wentworths were a prominent mercantile family during this time.  Benning Wentworth accepted the governorship in return for dropping a legal claim of payment against the British government.

Benning Wentworth then moved the seat of his colonial government to a 100-acre plot of land along Little Harbor in 1753.  The 1695 fisherman’s home located there had been expanded in 1730 and Wentworth would expand it again in 1750, creating the rambling, clapboard mansion that occupies the space to this day.  Wentworth resigned as governor in 1767 after colonists accused his administration of corruption, excessive taxation and nepotism.  He was succeeded by his nephew, John Wentworth and later donated 500 acres for the creation of Dartmouth College.  Wentworth was also known for his somewhat scandalous marriage to his much younger housekeeper, Martha Hilton, in 1760 after the death of his first wife.  This marriage is the subject of a Henry Wadsworth Longfellow poem.  Wentworth died in 1770 in Portsmouth.

The mansion and grounds were later acquired by the Cushing family in 1816 and they began showing it to the public in the 1840s.  In 1886, the home and 15 acres were purchased by John Templeman Coolidge.  Coolidge was a talented Boston artist and a trustee of the Boston Museum of Fine Arts.  He, along with the founder of the Society for the Preservation of New England Antiquities, Sumner Appleton, restored the mansion and the Coolidge family used it as a summer home.  Eventually, Coolidge turned the site into a summer artist’s colony that was visited by the likes of John Singer Sargent, Edmund Tarbell and Isabella Stewart Gardner.

Coolidge died in 1945 and the land and mansion were donated to the state in 1954 by Mary Abigail Parsons Coolidge.  The home underwent an extensive restoration in 1966 and a barn on the site was converted into a visitor center in the late 1990s and became an art gallery and winter art school in 2000.  The gallery then sat idle until the Drift Gallery relocated there from Kittery, Maine in 2013.  Today, the site is devoted to hosting community events and supporting the local arts.