The Vietnam Women’s Memorial honors the 265,000 women who served in the American military in the Vietnam era, 10,000 to 11,000 of whom actively served in the Vietnam War. Dedicated in 1993, this is the first memorial in the nation’s capital specifically dedicated to women’s service in the Armed Forced. The sculpture, created by artist Glenna Goodacre, depicts three women caring for a male soldier. The memorial is located within walking distance of the Vietnam Veterans Memorial Wall and the Lincoln Memorial.

The Vietnam Women's Memorial depicts nurses caring for an injured solider. Sculptor Glenna Goodacre wrote, "Even though he is wounded, he will live. I want this to be a monument for the living." Wikimedia Commons. 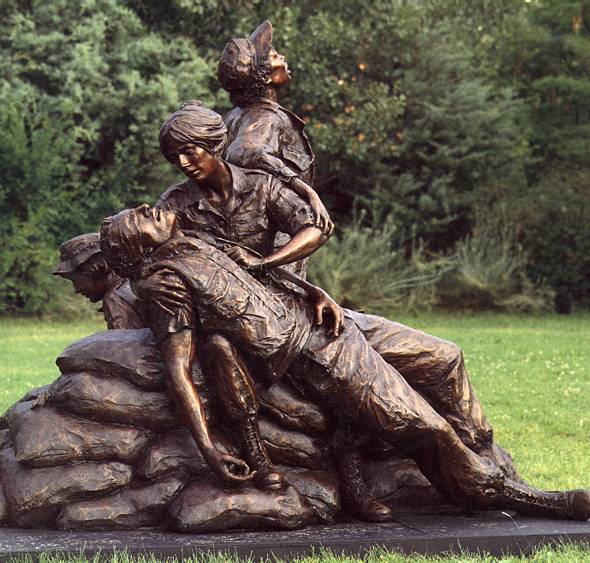 The sculptor designed this memorial to be viewed from all directions, with each figure expressing the complicated emotions and obligations of war. Wikimedia Commons. 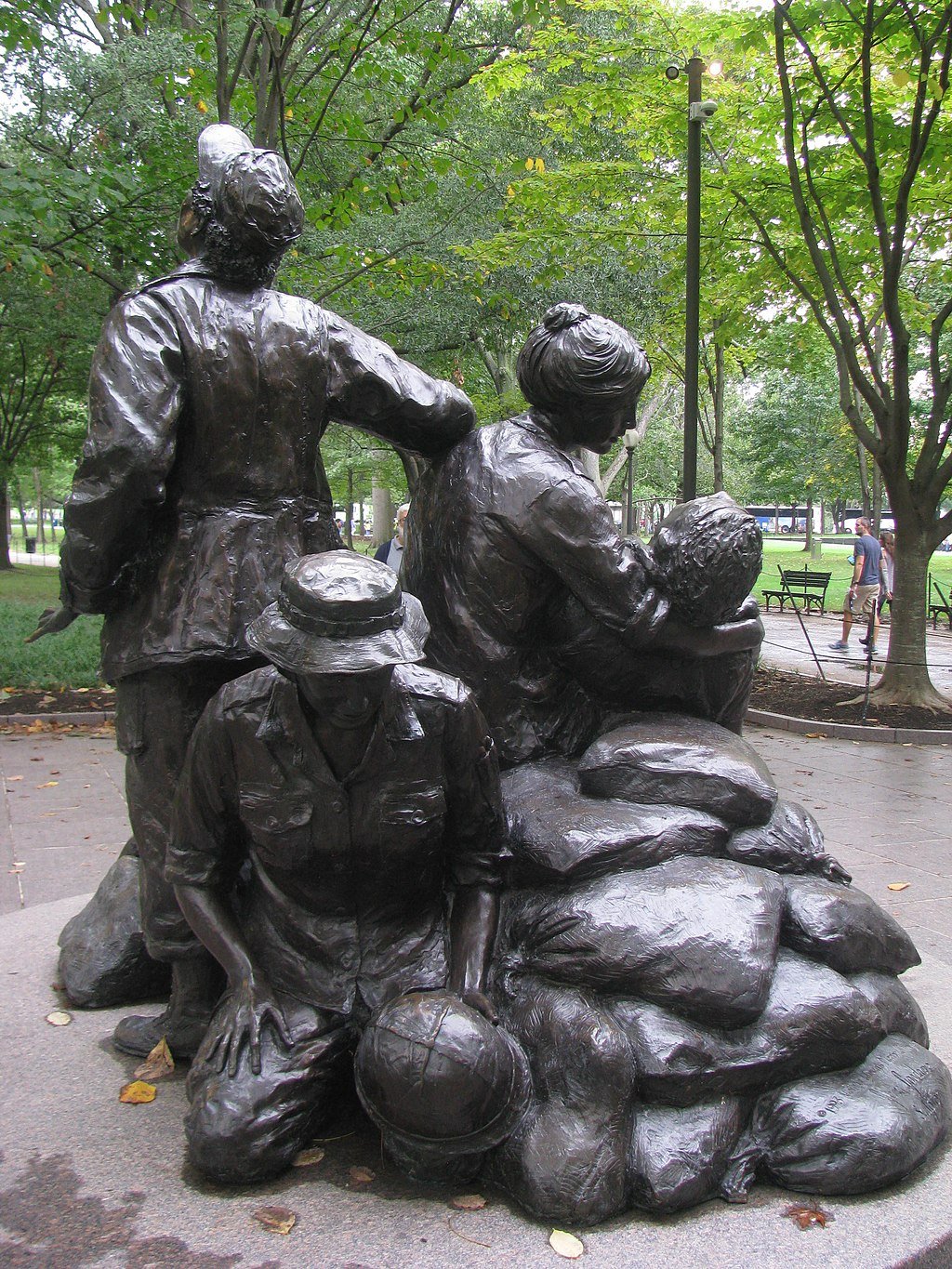 “Women, too, needed a healing place and a healing process.” Diane Carlson Evans, in Moving a Vision: The Vietnam Women’s Memorial

The Vietnam War lasted from approximately 1955 to 1975, with American military involvement officially beginning in March of 1965 and escalating with the military draft in 1969. 8.7 million members of the Armed Forces served in the Vietnam War, with 3.4 million deployed to Southeast Asia. After the Vietnamese victory in 1975, the war became more difficult to memorialize than previous wars in which the United States was victorious. While today, the Vietnam Veterans Memorial Wall is among the most emotional memorials on the National Mall, its contemporary, non-traditional design was met with controversy when it was dedicated in 1982. As a compromise, a sculpture depicting three soldiers was dedicated in 1984 to balance the wall of names, which some felt was impersonal. Of the two Army soldiers and one Marine in the Three Soldiers memorial, all were male. The sculpture described his design as “consistent with history,” a phrase that struck Diane Carlson Evans, an Army nurse veteran who served in Vietnam.1

Between 10,000 and 11,000 women served in the Vietnam War as volunteers. Ninety percent of the women served as nurses, and the remaining 10% comprised thousands of women serving as physicians, physical therapists, air traffic control, military intelligence, and administration. Worldwide, 265,000 women served in the Armed Forces. An unknown number of women also contributed to the greater war effort as civilians working as news correspondents and relief workers.

In 1984, Diane Carlson Evans founded the Vietnam Women’s Memorial Project (now the Vietnam Women’s Memorial Foundation) to create a memorial specifically honoring the service of women and their unique experiences in war. Evans imagined a memorial that would paint “a whole and true portrait of the women who served in the Vietnam War, depicting their professionalism, dedication, service, and sacrifice, had yet to be seen—their stories yet to be heard.”2 Visually and symbolically, this memorial would balance the Three Soldiers memorial depicting male soldiers and the Vietnam Veterans Memorial Wall, where the eight women’s names are etched among the nearly 58,000 men who made the ultimate sacrifice.

Establishing a memorial on the National Mall required approval from a number of commissions, which initially rejected Evans’s proposals. The Commission of Fine Arts, which reviews and oversees public projects, saw the Vietnam project as complete and symbolic of all servicepeople. Evans pressed on, going through a number of designs and plans. In 1990, the Commission of Fine Arts permitted a women’s memorial to be located within walking distance of the Vietnam Veterans Memorial. Shortly after, Evans and her team accepted a memorial design by sculptor Glenna Goodacre of New Mexico. The bronze sculpture depicted three Vietnam-era women nurses caring for an injured male soldier. According to Goodacre: “My first concern in designing this sculpture was to arrange the four figures in a composition that is interesting from all angles: a true sculpture in the round. The photos from Vietnam often included stacks of sandbags. It seemed natural for a nurse – in a moment of crisis – to be supported by sandbags as she serves as the life support for a wounded soldier lying across her lap. The standing woman looks up, in search of a med-i-vac helicopter or, perhaps, in search of help from God.”3 Goodacre’s design was approved by a number of federal commissions in 1993.

On November 11, 1993, the Vietnam Women’s Memorial was dedicated, with speakers lauding the achievements of servicewomen and value of the memorial’s presence on the National Mall. One woman veteran expressed what it personally meant to her: “I'm so grateful for your perseverance, commitment, and passion to make the women's statue become a reality...My heart is still over-flowing...You have given each of us women a priceless gift—the gift of hope and healing. For us to be recognized, honored, appreciated, and united was unbelievable.”

The Vietnam Women’s Memorial Foundation remains an active in preserving and remembering the history of women’s service in Vietnam. They host events such as reunions and speakers, compile bibliographies and resources, and are building an archive of oral histories.