Nestled on the edge of Pilsen, this community outreach center has served immigrants since opening its doors in 1898. Founded by a group of Christian women, its goal was to bring their values into action by helping vulnerable members of Chicago society. The center initially aided mostly Eastern European immigrants, but today serves predominately Latinxs, reflecting the change in Pilsen’s demographics. Rooms that once held sewing classes now teach girls to code, but some programs including kindergarten classes and health services have stood the test of time. The Gads Hill Center is an important symbol of the evolving needs of Pilsen's population and the power of communities to come together to help.

The Gads Hill Center as it looked in 1960. Today there is a playground located on the front lot. [Image courtesy of Brockie Dilworth, http://ecuip.lib.uchicago.edu/diglib/social/cityofneighborhoods/lws/con_lws-history_images-05(p6).html] 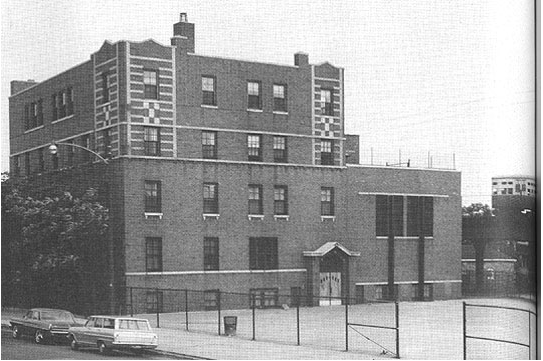 In the fall of 1896, two Christian women (a Methodist and a Catholic) developed a friendship stemming from their shared passion for supporting struggling youth in and around the Pilsen neighborhood. Leila Martin and Hettie French lamented that while their efforts were successful and growing, they did not have appropriate and sufficient facilities. Together, they decided to rent rooms in a building that previously housed a feed store and a saloon.1 As one historian noted, "They were without resources. They had no backing. They had faith...There was much prayer, much thought, and not a little solicitude."2 The women's faithful determination to provide much-needed aid to immigrant youth is a legacy that is visible in the organization today. After extensive fundraising efforts and gaining formal status as an organization on April 18, 1898, they opened their doors to the community; those who became involved were predominately from "Bohemia, Poland, Germany, Norway, Sweden, the British Isles, and sunny Italy."3 In 1916, the center moved from its temporary location (on West 22nd Street) to the current location of the center, on West Cullerton Street. With the move came a name change: the Gads Hill Social Settlement became the Gads Hill Center. Initial programs included a boys' club, savings bank, and library. In 1921, total attendance for all programs and events reached 86,701.4

Thirty years after the center's establishment, the arrival of the Great Depression caused a decline of industry in Pilsen which resulted in the exodus of many residents into Chicago suburbs.5 An eventual response to the center's related financial struggles was its establishment of a memorial endowment in 1940.6 Beginning in the late 1950s, construction of the Eisenhower Expressway displaced many Latinxs, who flowed into Pilsen. Over the next half-century, the Latinx population in Pilsen reached 80%.7 With the establishment of this community came an influx of immigrants, mainly Mexican. The 1966 Gads Hill Center Service Report noted this change: "Population change has accelerated since 1960. The newcomers are largely Mexican, a few Puerto Ricans and people from the rural south."8 The center was ready to meet the needs of this growing immigrant population with its already established initiatives to provide community, health services, and educational opportunities. The center also took steps to reflect the community's demographic shift in their leadership; the same 1966 report mentioned that "a Mexican woman will meet with the Board as a step to Board membership."9 Meanwhile, the neighborhood continued incorporating more Latinx immigrants, and “[b]y 1970, the shift between the Bohemian and Mexican populations in Pilsen was complete.”10

Throughout the 70s, the center worked to evolve its programming to reflect the specific needs of Pilsen's Latinx immigrants. In recognition of the struggle that many immigrants faced finding work, the center established an employment services program.11 They reported that the Gads Hill "office has been doing an extraordinary job in placing people in meaningful employment. It is very difficult to find good jobs for people who have a limited ability to speak, write or read English...A total of 339 people were placed on jobs in the period January through August 1973."12 After 1986, this effort was formalized into a spin-off program called Spanish Coalition for Jobs. In 1980, the center launched a Head Start Program explicitly focused on serving Latinx immigrant families.13 The program brought social workers and volunteers into homes to provide support for parents and encourage methods for developing early learning and social development in their young children. Since the Gads Hill Center housed a kindergarten program as well, programs like these established relationships between the center and immigrant families that lasted for generations. Acknowledging the need to address important issues clients were facing, 1989 saw the creation of a domestic violence prevention program which eventually became the sister agency Mujeres Latinas en Acción (Latina Women in Action).14

Today, the Gads Hill Center remains committed to serving immigrant and underserved families in Pilsen, as well as its 3 satellite locations in Brighton Park, North Lawndale, and Chicago Lawn. Recent years have featured the expansion of mental health services for teens and adults, education initiatives encouraging female students to engage in STEM (science, technology, engineering, and math), and Health Moves, which promotes active lifestyles and well-balanced diets.15 The center is run by a board of directors; currently the majority are Latinx.

In 1898, the Gads Hill Center founders took on the challenge of providing steady support for poor immigrants facing challenges in a new country. 121 years later, the people helped may be different, but the center's values and success in helping them remain the same. A 1960 promotional piece about the center quoted a participant; perhaps she said it best: "There is an old adage to the effect that, 'the home is where the heart is,' and surely many a heart, including mine, can be found at Gads Hill." 16

Created by Mary Grace Ramsay (Instructed by Emiliano Aguilar AND Geraldo Cadava, Northwestern University) on May 31st 2019, 2:16:53 am.