The Swap O'Rama is a flea market located in the Back of the Yards neighborhood, a predominately Hispanic neighborhood on the South side of Chicago. The flea market was created in 1969 as a response to the closing of the Union Stock Yards by African Americans, Asians, and the Latinx community from the area. The flea market carries a wide variety of items such as food, clothes, and handcrafted items where some are imported from Latin American countries.

One of the many stands in the Swap O'Rama that bring Mexican snacks to the public. 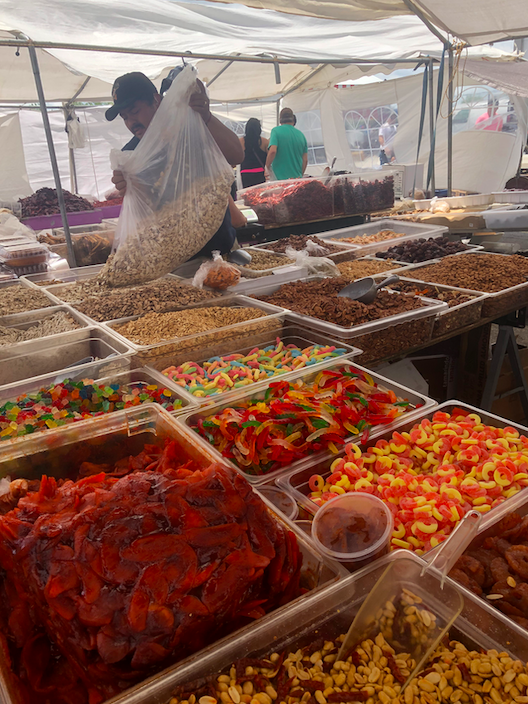 The intersection of cultures is symbolized through the intertwined American flag and Loteria. Loteria explores some of the ubiquitous images of Mexico using cards drawn upon Mexican traditions, historical figures, gastronomy, and popular culture. 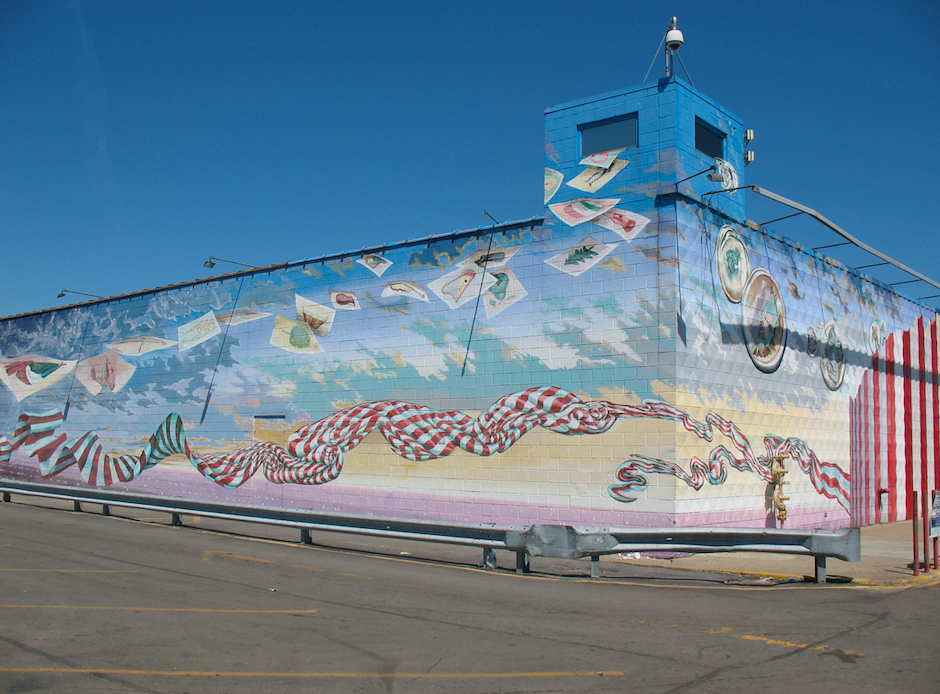 For years families visit the “Swap O’Rama”, a Latinx flea market in Chicago. Through the picking of juicy ripe fruit from Mexico in the summer, or the thick blankets from Columbia, suitable to protect you from Chicago’s harsh winters, this flea market carries every product desired for purchase. The Swap O’Rama is a year round flea market located in the Back of the Yards neighborhood. For only a dollar, everyone is welcome to join Latinx communities in being united under this economic entity. While the flea market is predominantly Latinx,the flea market is also home to many Asians and African Americans as well. Through consumerism and interactions, The Swap O’Rama celebrates the markets’ sense of rich cultures and community by focusing on local entrepreneurial spirit, fostering a form of communal bonding and support.

Before the establishment of the Swap O’Rama, the land was “once the site of the Union Stockyards.” For many years, the assembly lines brought many jobs to low income neighborhoods including Back of the Yards. However, as the globalization of technology began to diffuse throughout the world in the mid 1900s, the stockyards lost their prominence. Once the stockyards shut down, there became “a hole in the city’s economy” being the crucial economic source of the area. To compensate for the economic downfall, there were many local shops that arose including the Swap O’Rama; selling at the flea market thus became a main source of income and full time employment for many families, especially because the creation of the Swap O’Rama was made out of means for survival. The creation of Swap O’Rama in 1969 was tailored around the everyday cultural and social necessities of the Latinx community. As a result, the “market attracts mostly Latino people from the neighborhood and surrounding areas” due to the affordability and cultural products. Jose Valdez, a vendor at the Swap O’Rama, stated that the Back of the Yards community redefined their neighborhood as an act of survival.  Jose explains how “The people from [his] barrio each tried to bring different items to sell or trade” to act as a food pantry, thrift shop, and community space all at once. While the flea market still is an alternative to many of these places, the expansion of outside vendors allowed the Swap O’Rama to evolve a more commercial focus.

The Swap O’Rama is conducive to diversity through it’s low entry barriers for vendors, as well as the communal, interactive style of market exchange, naturally leading to intercultural interactions. The Swap O’Rama is extremely diverse through its products, vendors, and consumers. The flea market carries many gender, ethnic, religious, income, and racial backgrounds. This prominent diversity creates a “sense of community which contributes to the economic success” of the sellers as Valdez shares. Moreover, the transnational relationship between vendors, consumers, along with the exchange of cultures and stories demonstrate how marginalized communities can begin to create informal coalitions and support based networks. Fernanda Valdez shares that because of community familiarity and interactions with sellers, vendors  are able to “[encourage] the products of other sellers bridging social, political and cultural divides” which builds capital and power between minority groups such as Asians, Latinx communities, and African Americans. The repeat interactions of individuals emerge into relationships that build the community. Especially when most shopping has transferred to online purchases, it is important to visit this complex arena of social and economic interactions to understand other‘s cultures and norms, creating a platform for marginalized groups to sell and share their products.

There’s a uniqueness of having products imported from different countries and cultures including: non western medicines, handcrafted products, and clothes where you can find a story behind every product and seller. Moreover, the availability of purchasing household appliances, food, and medicines demonstrates how instrumental the Swap O’Rama is to the community, for the flea market was constructed in part to provide a source of affordable goods for the Back of the Yards community with high levels of unemployment after the closing of the stockyards. The experience of ethnicity in the marketplace—through food, goods, customs, music, and “culture”—bolsters individual cultural capital of many Asian, African American, and Latinx ethnicities.

The swap O’rama is a place where you can enjoy food from different cultures, dance to many genres of music while strolling through the flea market, and make many more purchass than you intended. Interactions between diverse groups can encourage a sense of shared identity, hybridity, or appreciation of difference that encourage meaningful relationships and a sense of community. They also serve as places where ethnicities can access the items and products that allow them to carry out their own cultural practices and teach them to their children. The Swap O’Rama is a pivotal  space for Hispanic communities to form networks and coalitions while obtain economic and social mobilization.