Of the murals that extend almost a mile along 16th street in Pilsen, "Galeria del Barrio" is the oldest. Aurelio Diaz painted the mural in 1976 with the help of 20 children from St. Procopius Church; it consists of 22 Chicano men of varied colors and emotions. "Galeria" is important to Pilsen's Chicano community because it conveys the complex emotions Latinos in America experienced, and gentrification contributes to the destruction of its predecessors. The mural is publically accessible, has helped make Pilsen a veritable mecca for Mexican art, and still inspires new pieces.

The 22 Latino faces Diaz painted in "Galeria" on 16th Street move through many emotions to convey the complexity of feelings a Latino experiences. The first face is contorted, and the expressions change to apathetic then sad as you look to the right. 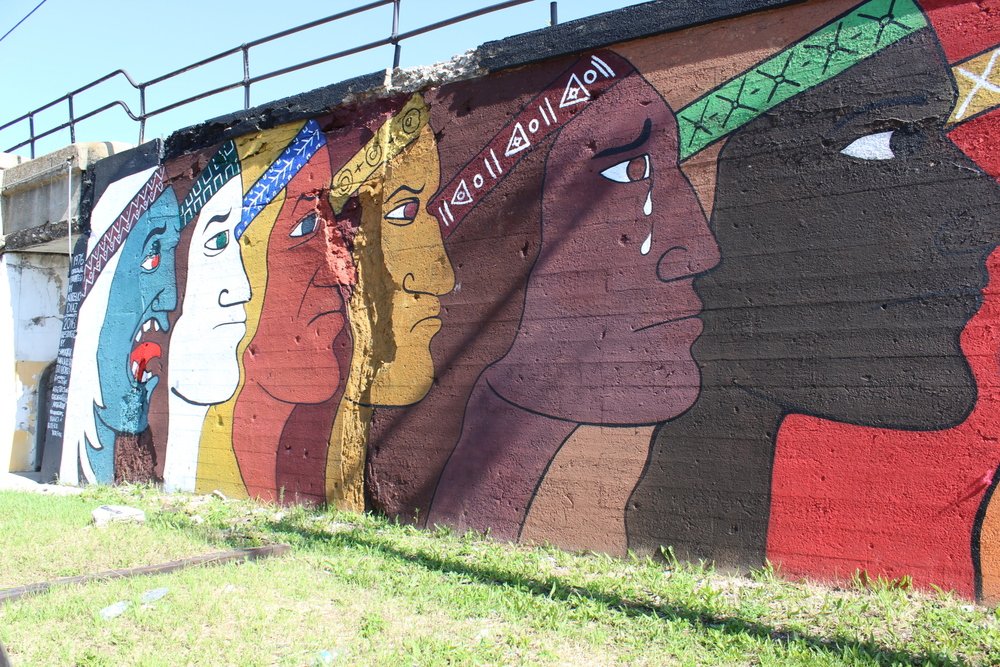 The faces then become happier and continue to change colors while retaining the same features; this could symbolize how much one Latino endures and changes in his life. 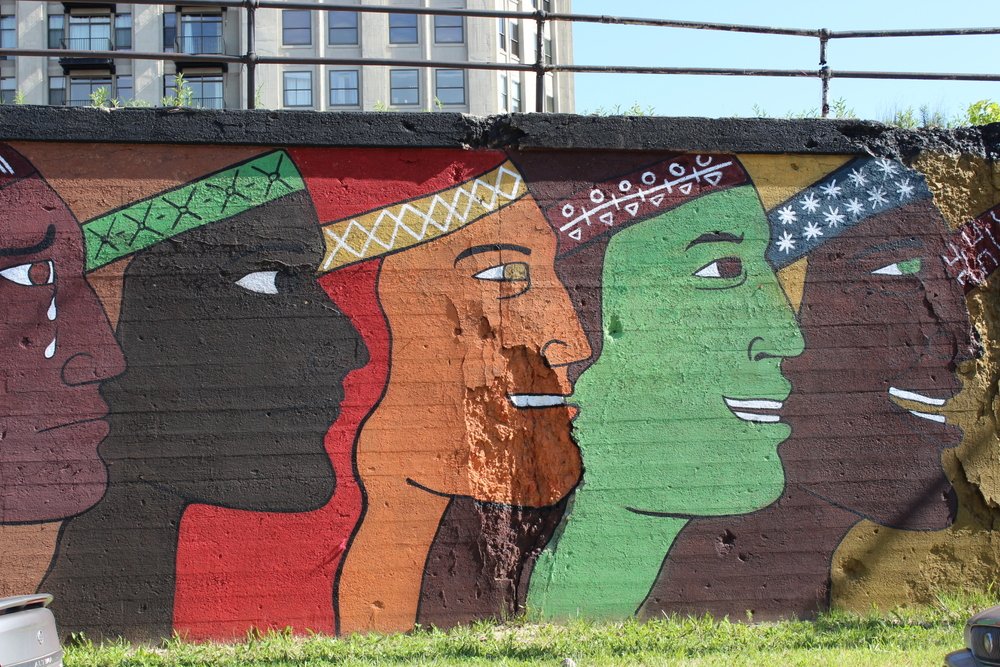 In the last half of the painting, the men go from happy to grief-stricken to angry. Diaz painted the final one monstrous like the first, smiling and breathing out a fetus, which implies the faces may represent emotional change over generations. 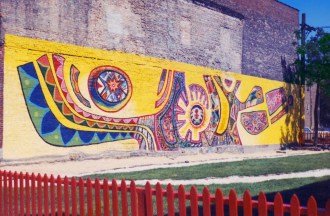 Mexican murals began to appear in Pilsen, Illinois at a turbulent time for Mexican Americans, the height of the civil rights movement. Some murals openly expressed anti-Vietnam War sentiment, while others protested the deportation of illegal immigrants. Diaz’s mural “Galería del Barrio” was among the first, but differed from some others in that it did not focus on the impactful events of the time, but on the emotional effect on Chicanos themselves. It shows Chicanos experiencing emotions like joy, grief, and anger, one after the other, their faces 10 feet tall and impossible to ignore. “Galería del Barrio” directed attention to Chicano’s emotions during a turbulent time of change when strong passions and tensions ran high in the Chicano community. “Galería” remains significant not only because of its immense effect on expanding Pilsen’s art scene, but because it continued the Native American tradition of self-expression through murals and withstood the decades of decay and gentrification that eliminated so many historically significant Pilsen murals.

Murals have long been a popular form of self-expression and important contributor to developing collective identity in Mexico. Mayans used them to preserve their knowledge of natural phenomena for future generations, honor rulers and depict everyday life. At the end of the Mexican Revolution, the government painters to create murals to educate even illiterate Mexicans about their history so murals' popularity rebounded in the 1920s and 1930’s with popular works like Diego Rivera’s “The History of Mexico.” Such murals celebrated Mexicans’ ability to shape their history, often glorifying soldiers and battle victories, but mainly protested the Vietnam war when they first decorated Pilsen’s walls in the late 1960’s. Pilsen is predominantly Chicano, and Chicano Mario Castillo pioneered Pislen's mural tradition in 1968 with “Peace” or “Metafisico.” The Smithsonian Latino Center describes it as “an ethnic statement about empowering Mexican Roots, a protest against the Vietnam War, and a reflection of the Hippie culture” and “an example of the cultural fusion that brought about the new age movement…which was initiated in the 1960’s by the Hippie’s cultural revolution."

Before long, Aurelio Diaz added the first mural to 16th street. Little is known about the artist besides his being Chicano, but when he painted “Galería del Barrio,” which translates to “Gallery of the Neighborhood,” in 1976, he inspired art that traveled down 16th and spread throughout the city. Diaz modeled the 22 Latino faces after Robert Herrera, a Chicano volunteer who was 16 years old at the time. Their array of emotions to convey the complexity of feelings a Latino experiences. From left to right, the faces change from calm, to sad, to happy, to sad again then to angry. Diaz's mural borrows some characteristics from the style of pop art, with the faces very similar in features but varying with bright, contrasting colors, from hot pink to lime green, which emphasize the constant transformation of Chicanos in the mural. Diaz painted the first AND last faces monstrous, indicating that this fluctuation of emotional states is cyclic, with the last one breathing out a fetus, implying continuity.

In the decades since Galería del Barrio, inspired artists have added their works into an almost mile long stretch of the street, and Pilsen has become what Tufts University calls “a cultural hub for Chicanos and other Latinos as well as a center of art in general.” Gentrification and natural erosion has threatened many historic murals in Pilsen, however. Castillo called painting Mexican murals a way validate the vulnerable Mexican identity, but sadly, “Metafisico” was sandblasted away in 1988. Now, avid scholars at institutes like the Smithsonian can only study the work through photographs and are still unraveling the symbols Castillo integrated, while Tufts is currently attempting to map all of the Pilsen Murals as more older ones disappear. In 2017, for example, “Casa Aztlan,” the iconic 1970 mural by Ray Patlan, was painted over by a developer to community outrage. Losses like this make even more important the preservation of murals like “Galeria.”

In 2016, Sam Kirks restored “Galería” to its original vibrance, then he and Sandra Antongiorgi created a reinterpretation of it across the street. At 1314 W 16th St., Weaving Cultures features underrepresented women, including a transgender Latina, looking in the opposite direction of the subject of “Galería,” with a design in the background that weaves them together. It was painted to encourage acceptance of and discussion about diversity, an example of how through “Galería del Barrio” continues to inspire artists and transform Pilsen more than 40 years after its paint first dried.