This memorial was established in 2003 and commemorates the life and legacy of one of the members of the Lewis and Clark Expedition (1804-1806), John Colter (c.1774-1812). Lewis recruited him in October 1803 and he enlisted in the expedition as a private. Colter started out as an oarsman but eventually became a hunter, scout, and messenger. In 1806, he left the expedition to become a trapper and explorer. In the winter of 1807-1808, he became the first known European to enter what is now Yellowstone National Park. Colter reported what he saw to William Clark, who added this new information to the published accounts of the expedition. For his exploits as a trapper and explorer, Colter is considered to be the first "mountain man." The memorial consists of a shelter, a stone monument, and a number of interpretive markers. There is also a caboose on display.

The John Colter Memorial was established in 2003. 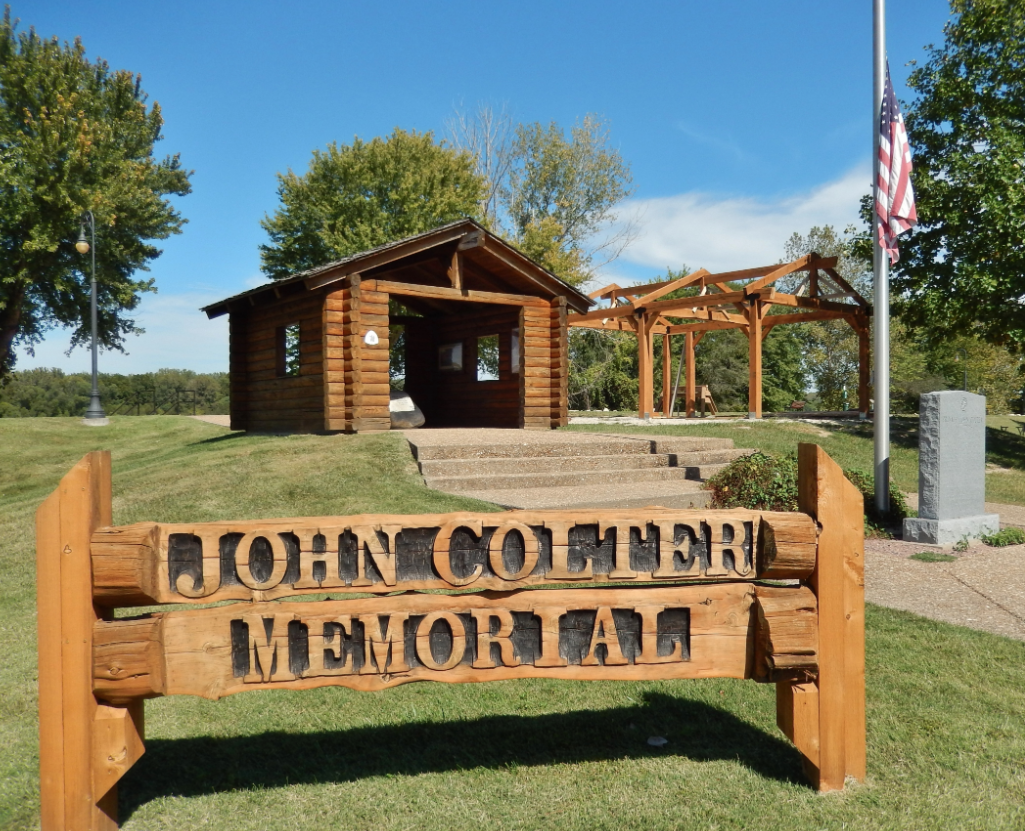 John Colter was born in the Virginia colony c.1774 and he and his family moved to Maysville, Kentucky in 1780. He grew up to be 5 feet, 10 inches tall and acquired outdoors skills that would become useful as an adult. During the expedition, his skills as a hunter and scout impressed everyone. He was also skillful at finding routes through difficult regions such as the Rocky and Bitterroot Mountains. Another skill was communicating with Native tribes the expedition encountered. When the expedition reached the mouth of the Columbia River near the Pacific Ocean, Colter was one of the members of the small group that reached and explored the Pacific coastline.

On the return trip eastward, in August 1806 the expedition encountered two fur trappers on North Dakota who were headed in the opposite direction. Lewis and Clark granted Colter to be honorably discharged so he could lead the men. However, the men had falling out and parted ways six weeks later. Colter continued to trap but began another return journey in 1807.

However, he encountered another group of traders, including members of the expedition, who were headed back up the Missouri River. At the confluence of the Bighorn and Yellowstone Rivers, the men built Fort Raymond. In October 1807, he was tasked with establishing a trade relationship with the Crow Indians. It was during this time that he explored the Yellowstone region as well as the Grand Teton Mountains. His stories of geysers, steaming water, and bubbling mud were initially dismissed and the area was dubbed "Colter's Hell."

Colter finally headed east for the last time in 1810, deciding that the wilderness was too dangerous after hearing two partners were killed by Blackfeet Indians. He arrived in St. Louis where he met and married his wife, Sallie, and bought a farm. It was during this time that he met with William Clark to recount what he saw on his explorations. Colter served in the War of 1812 as a member of the U.S. Mounted Rangers commanded by Nathaniel Boone, the son of Daniel Boone. Records state that he died in 1812 of illness, possibly jaundice.