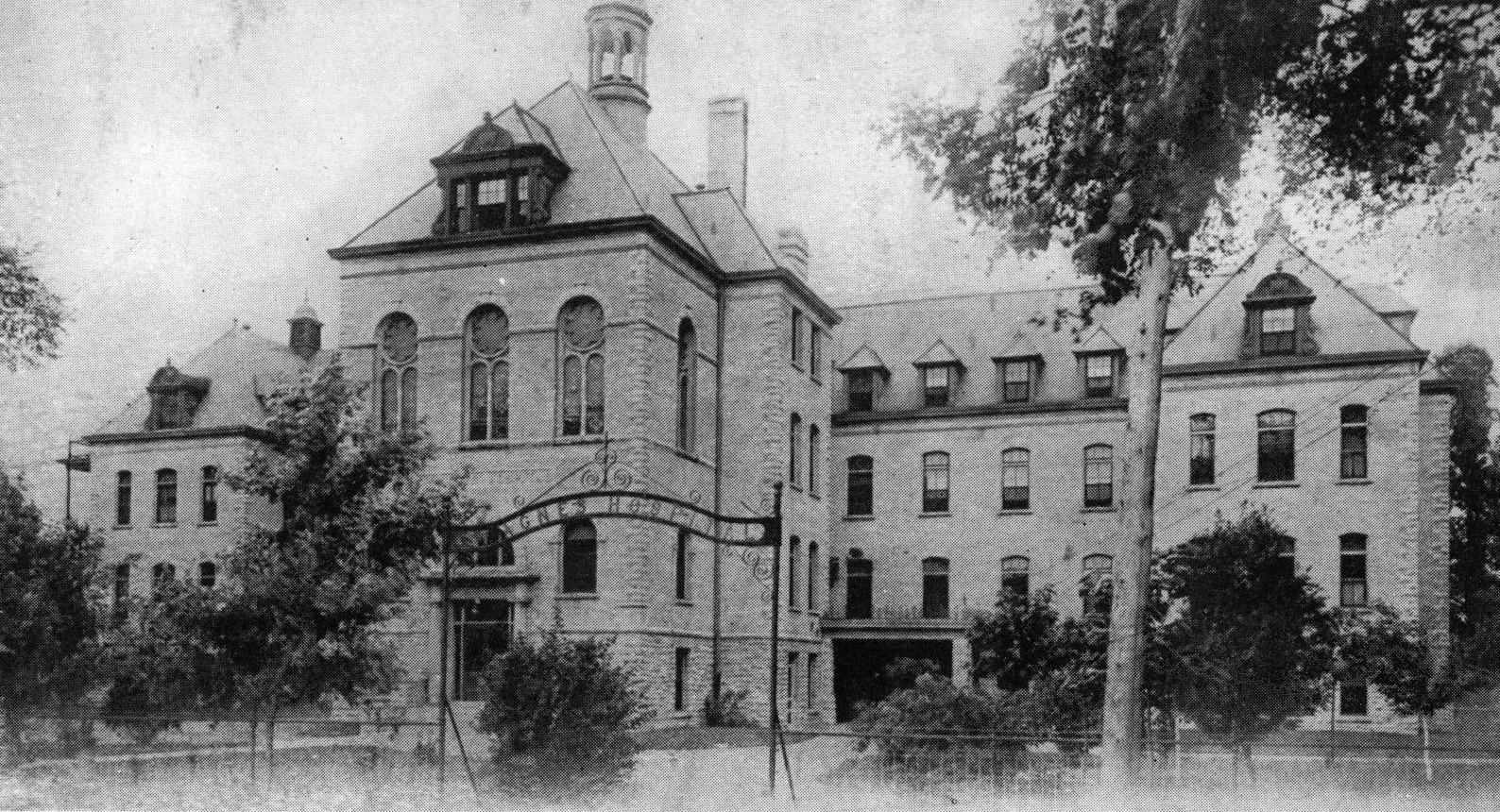 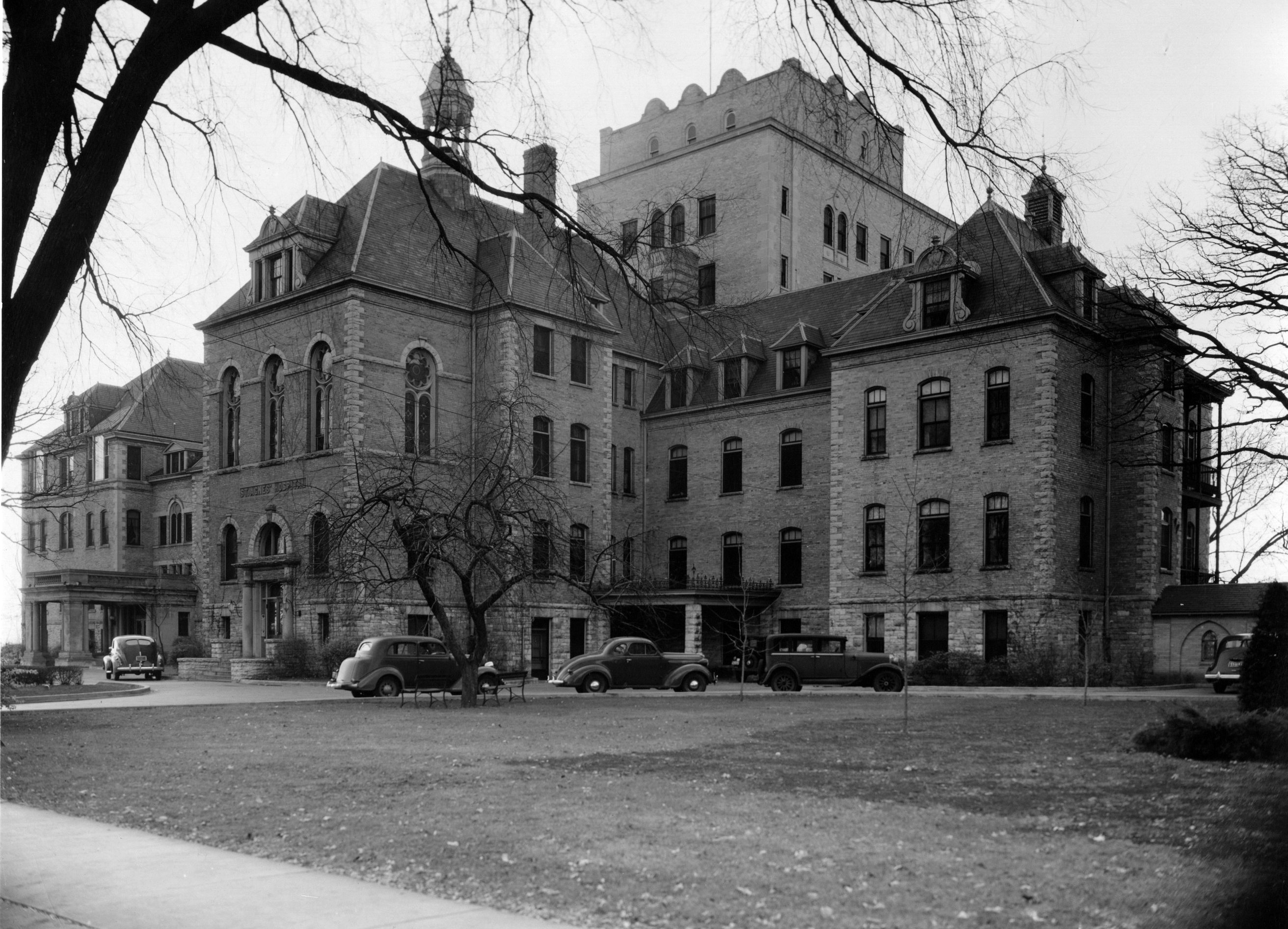 Aerial view of St. Agnes Hospital with convent in the foreground and St. Agnes School of Nursing in the background, 1957 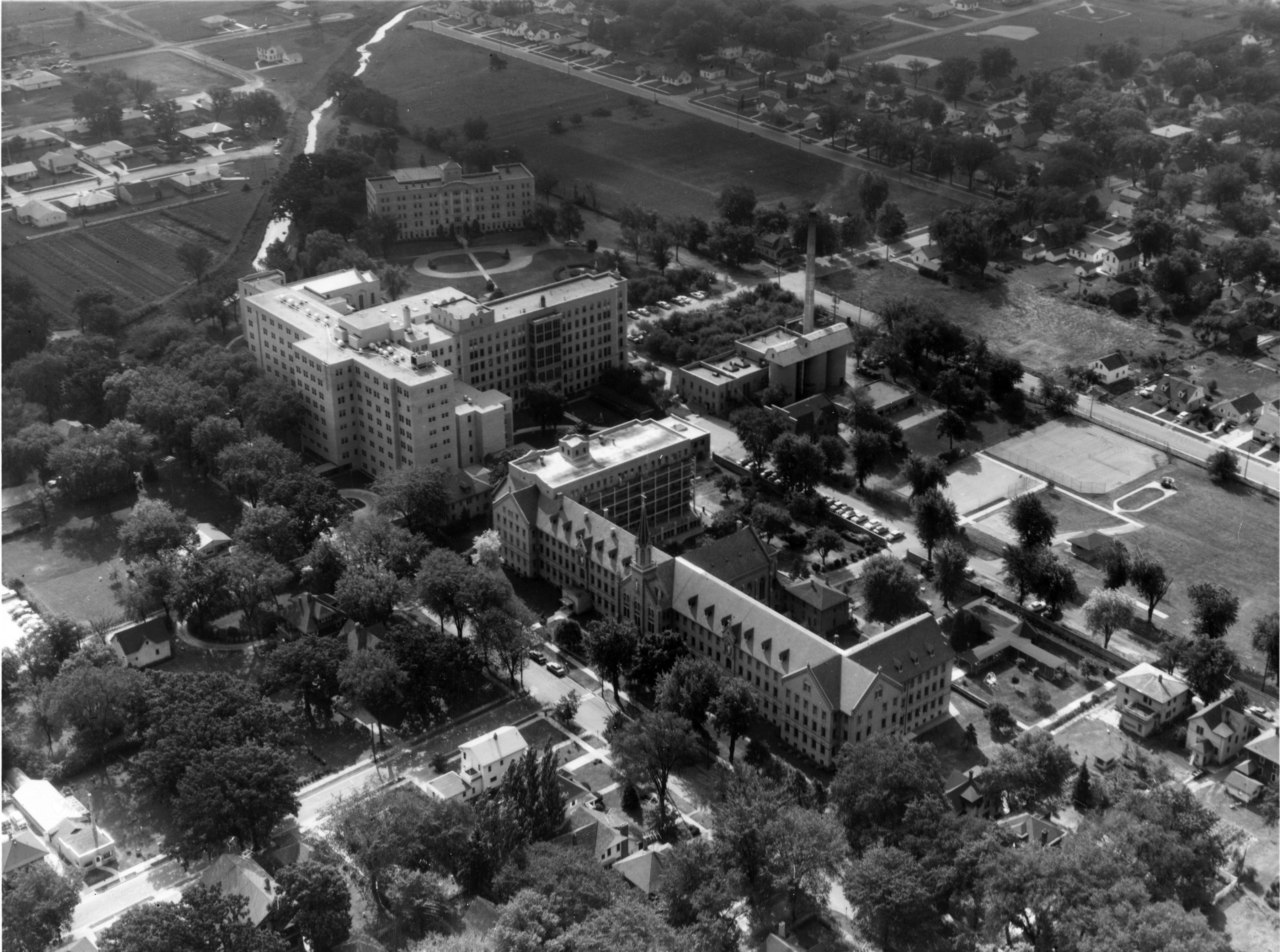 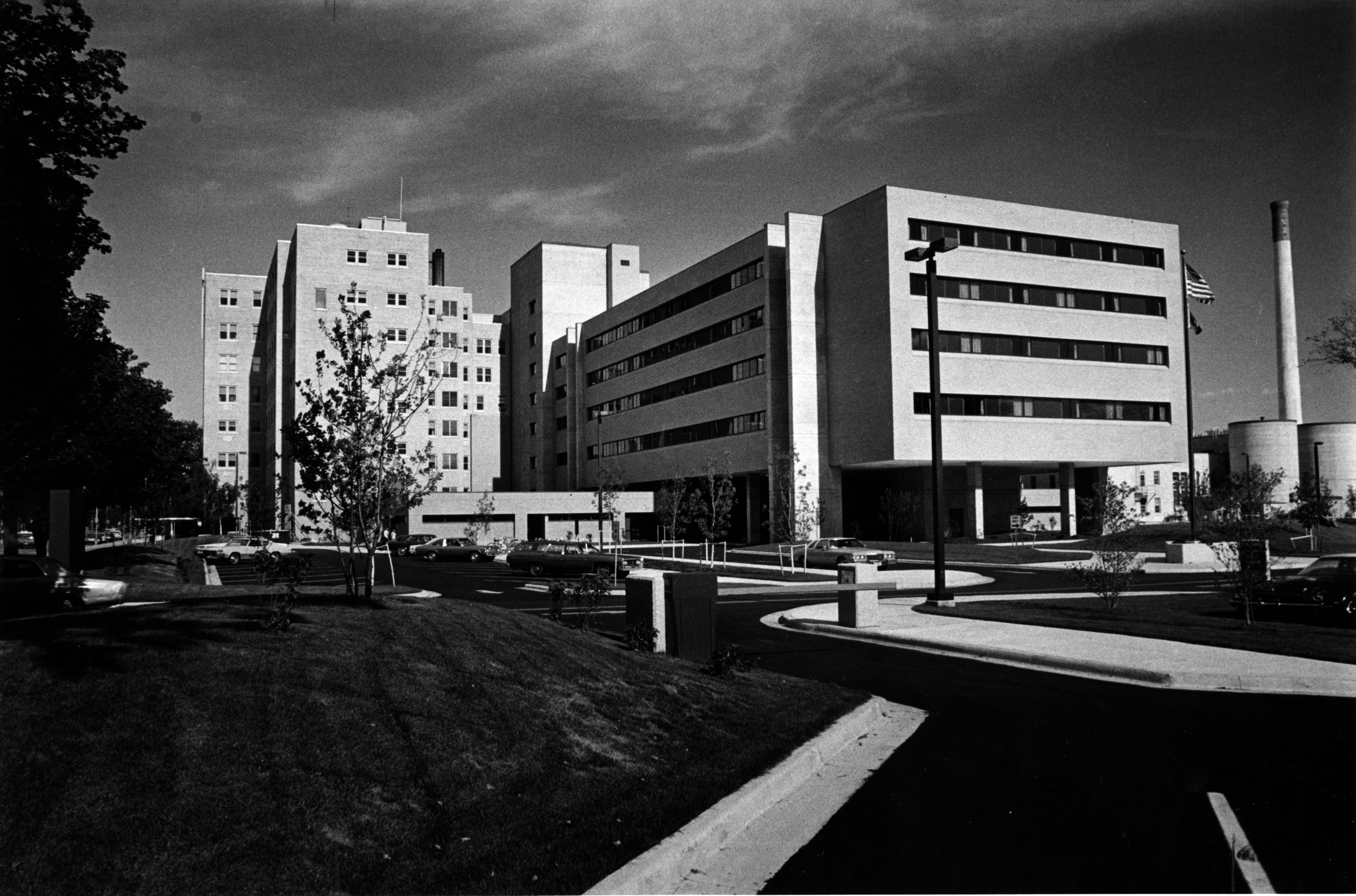 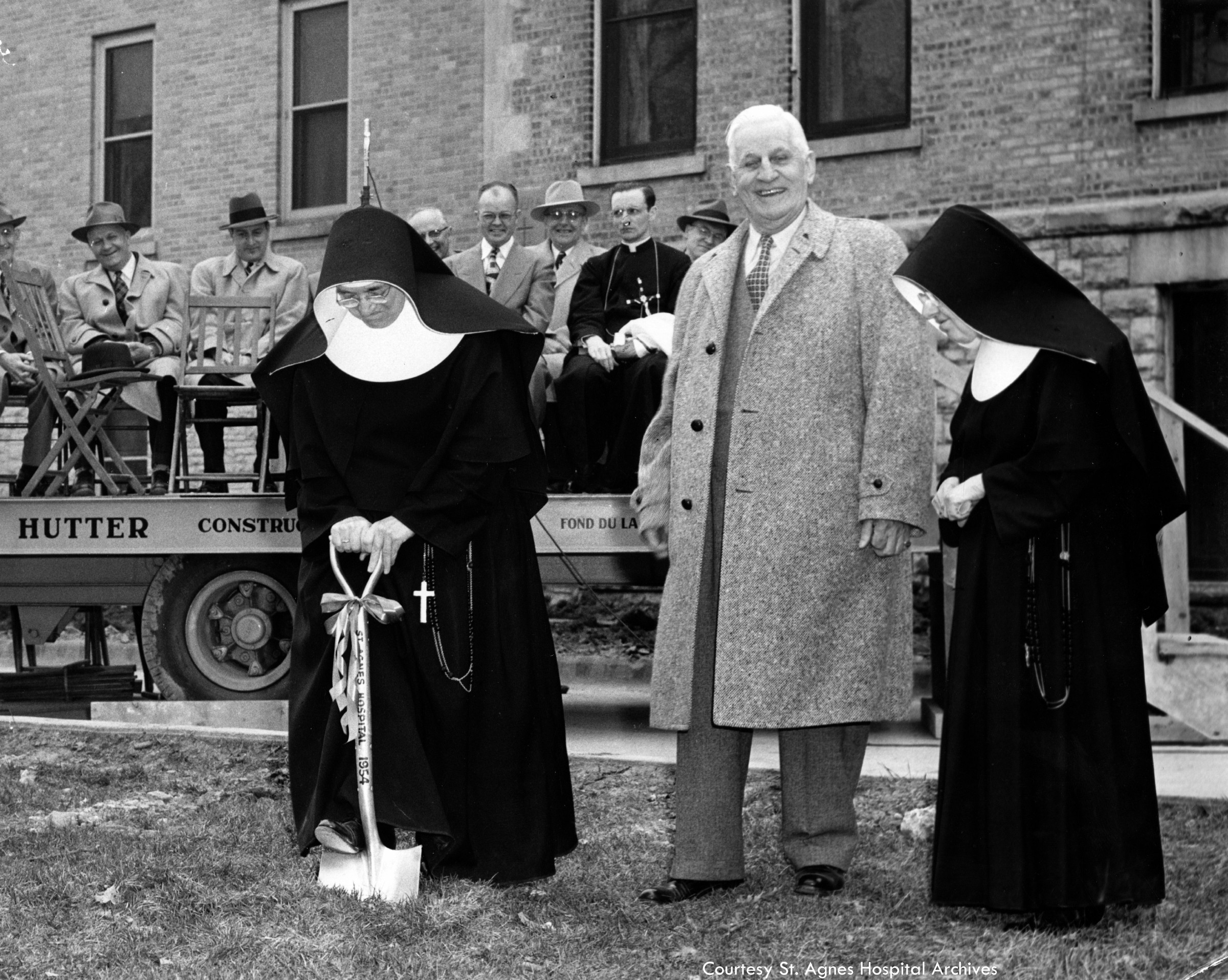 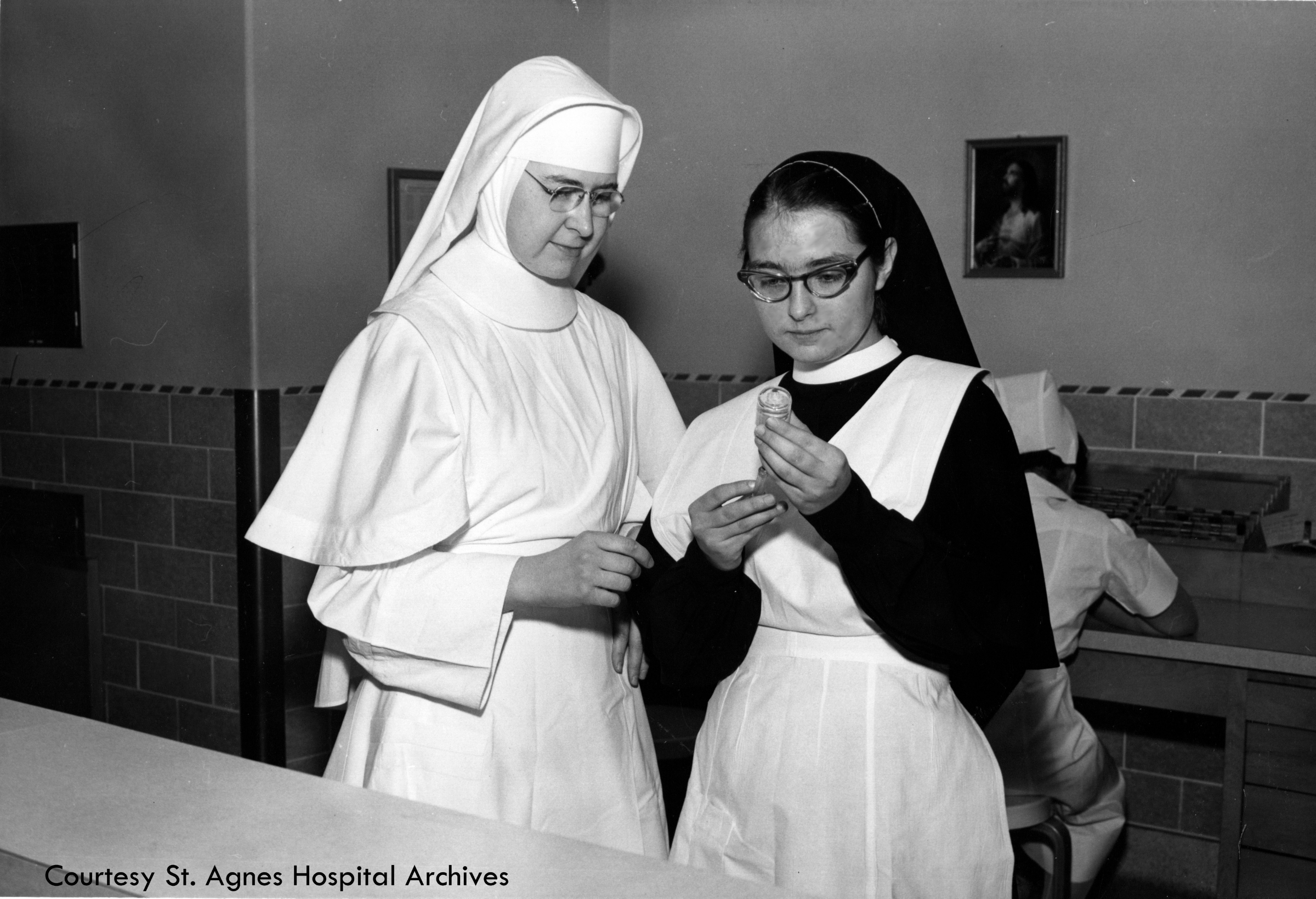 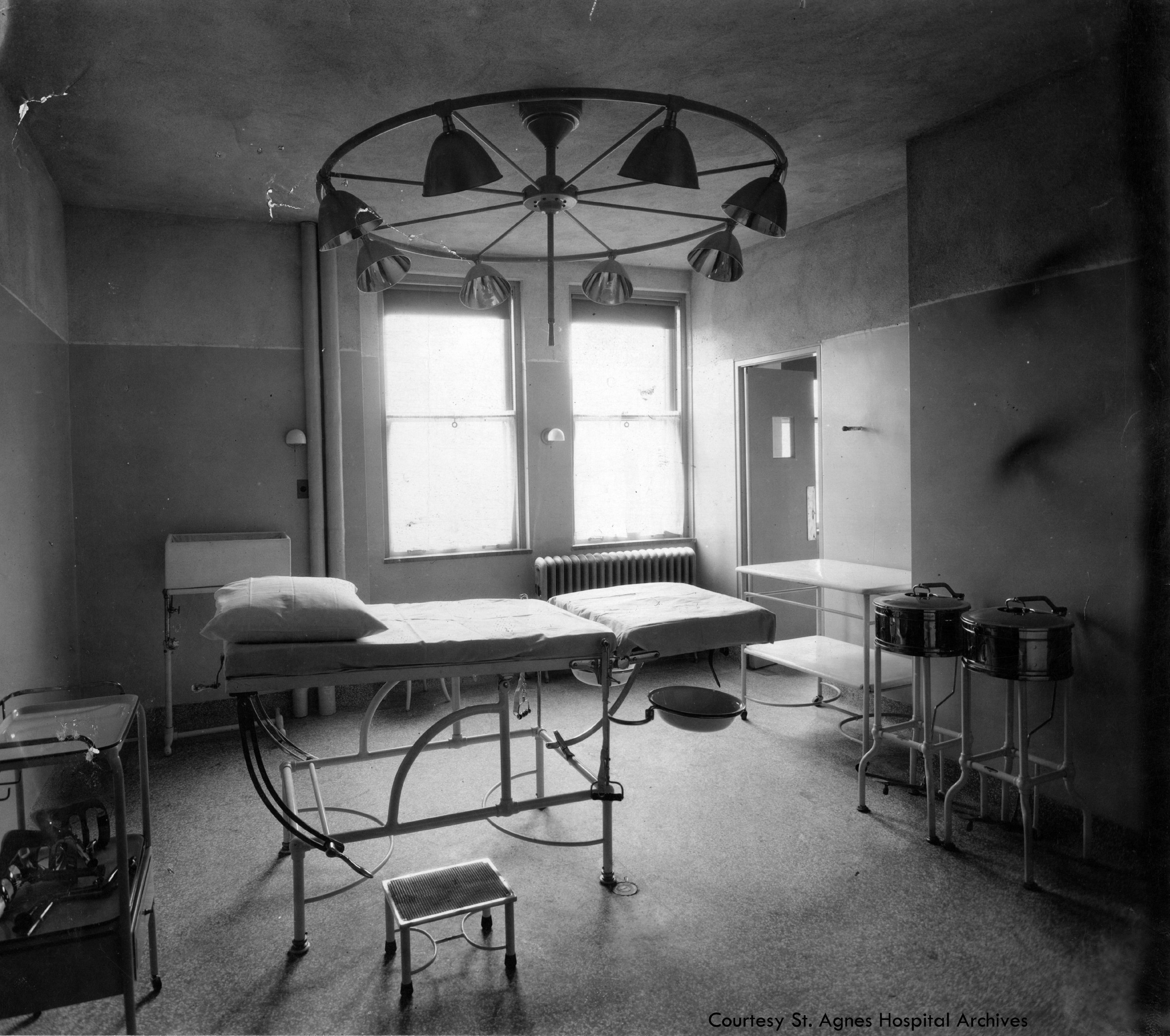 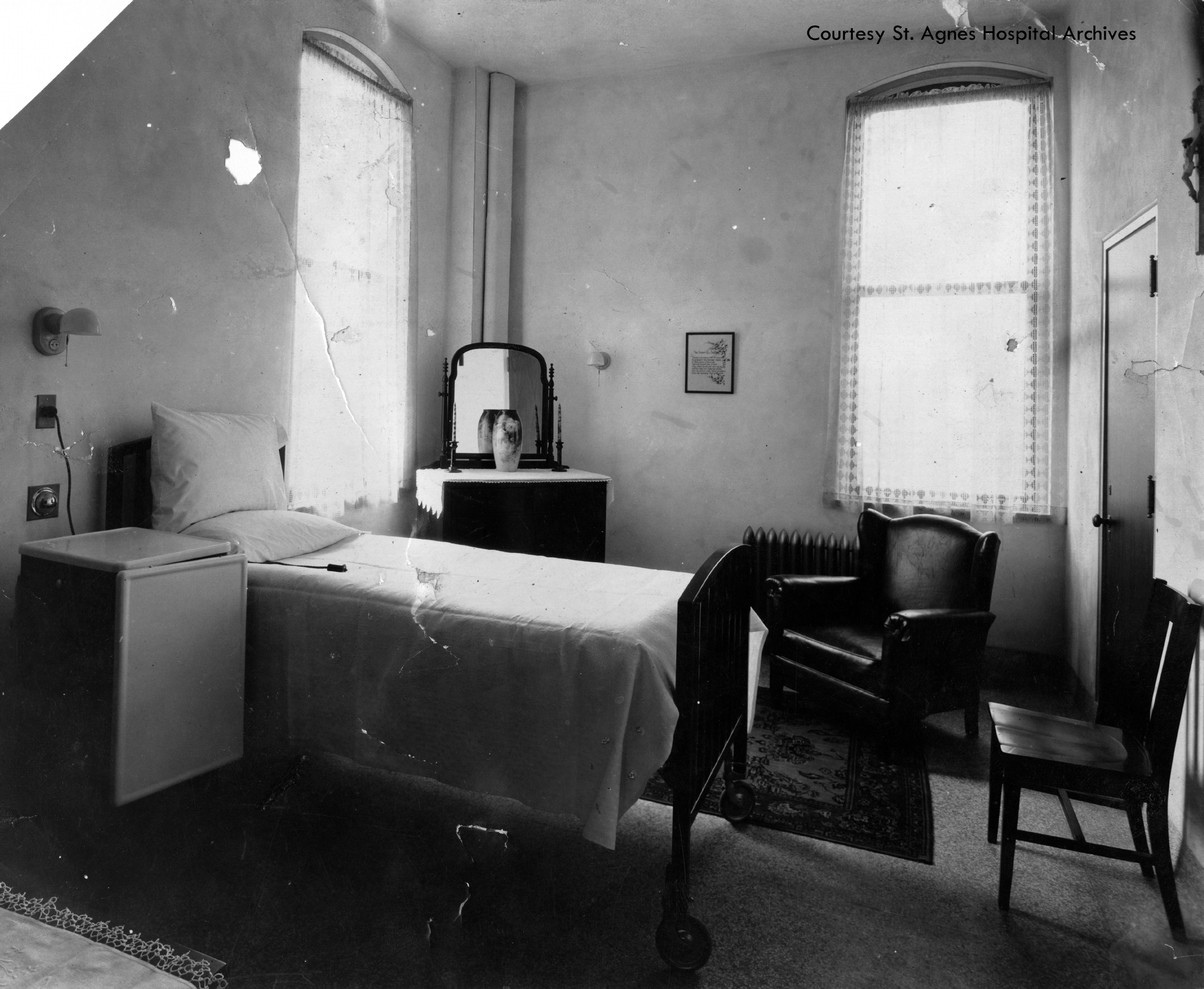 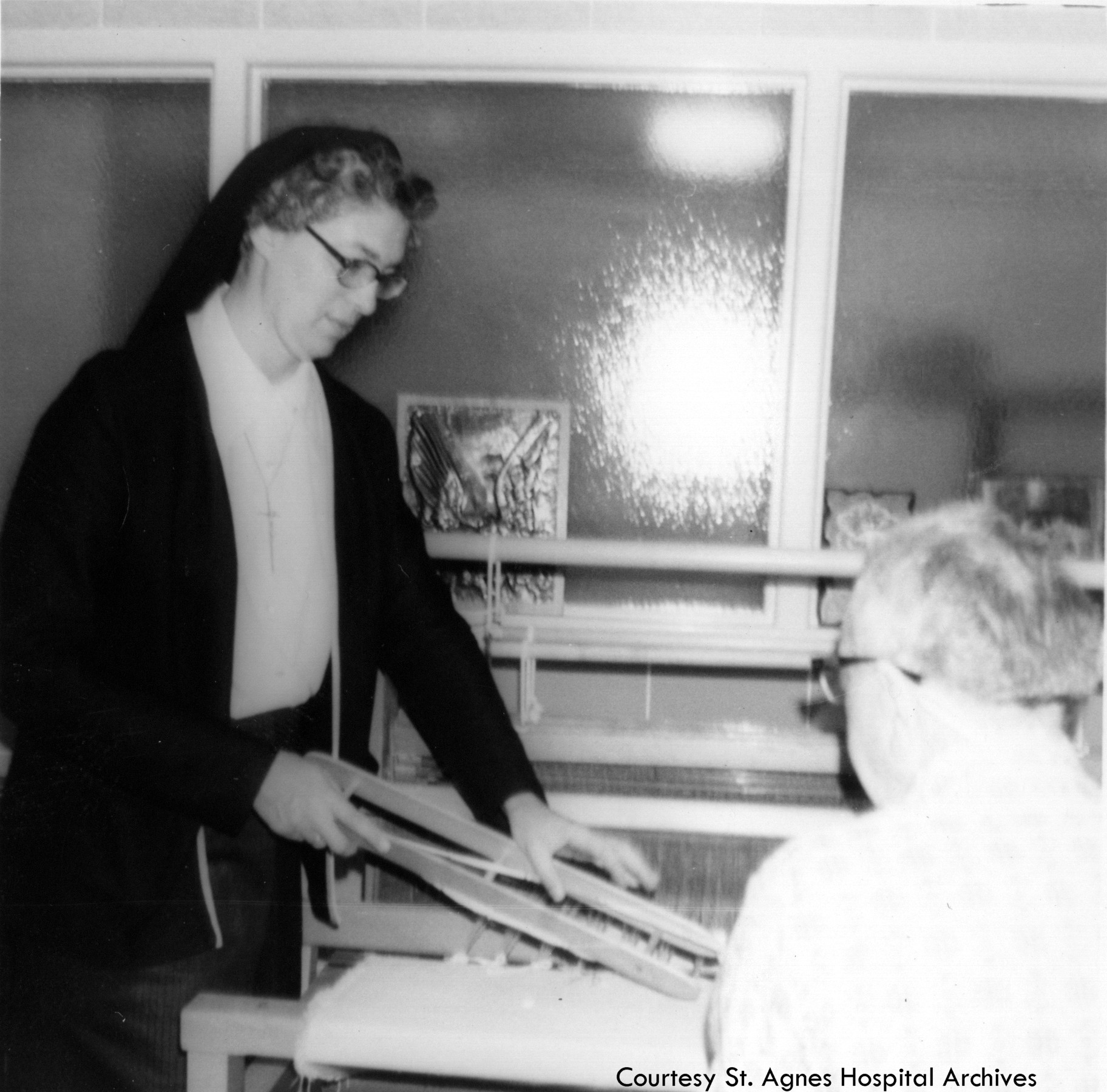 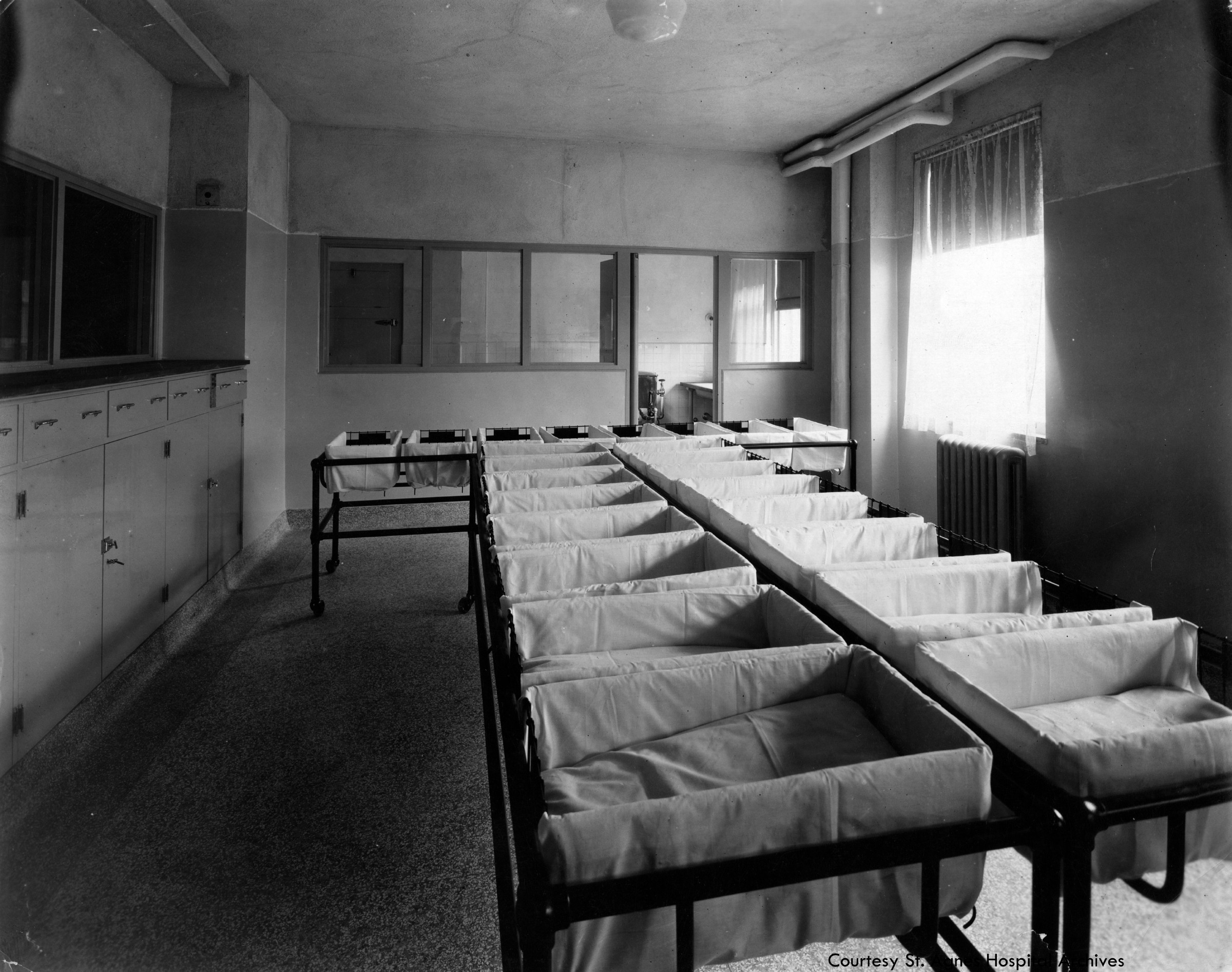 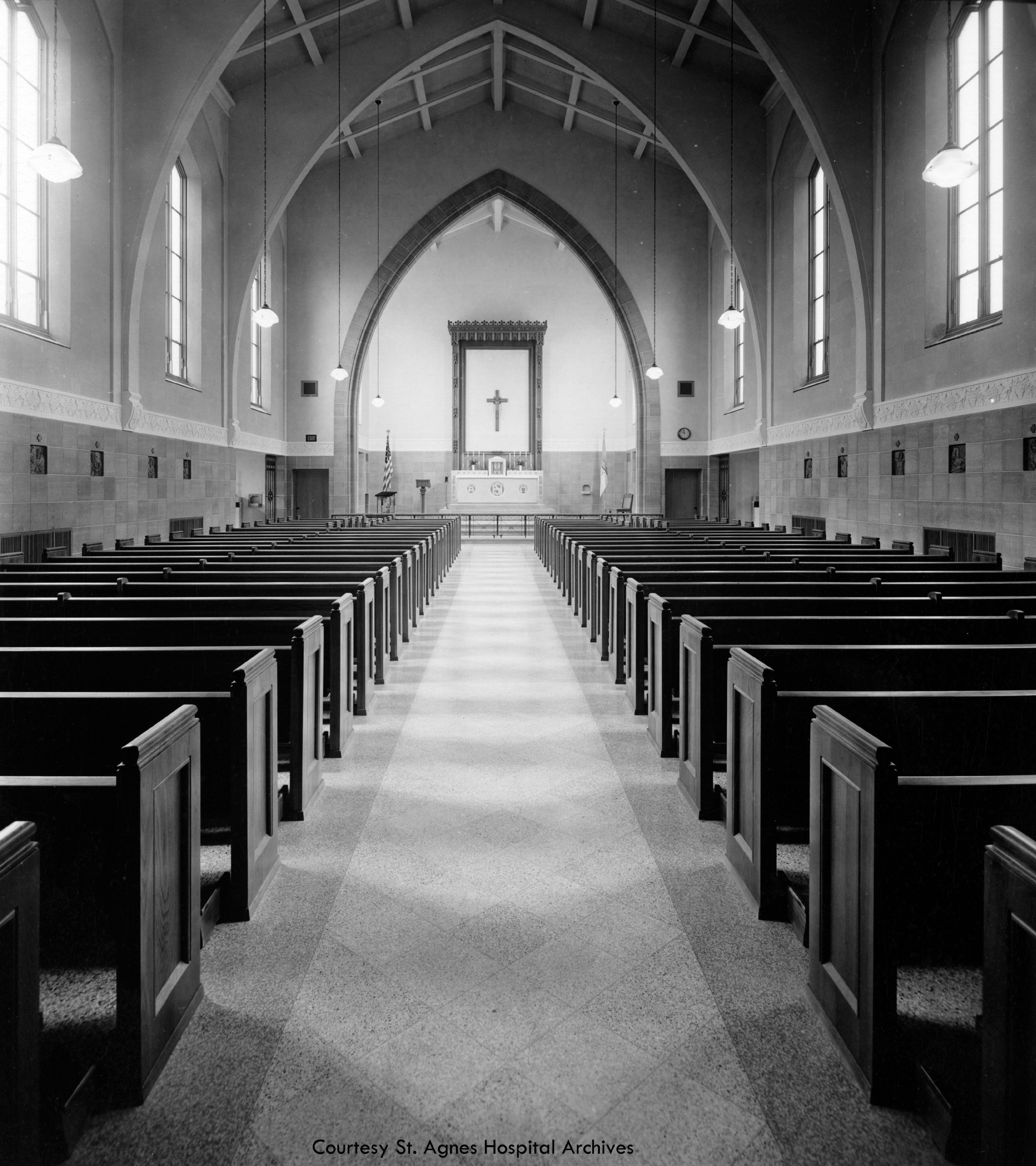 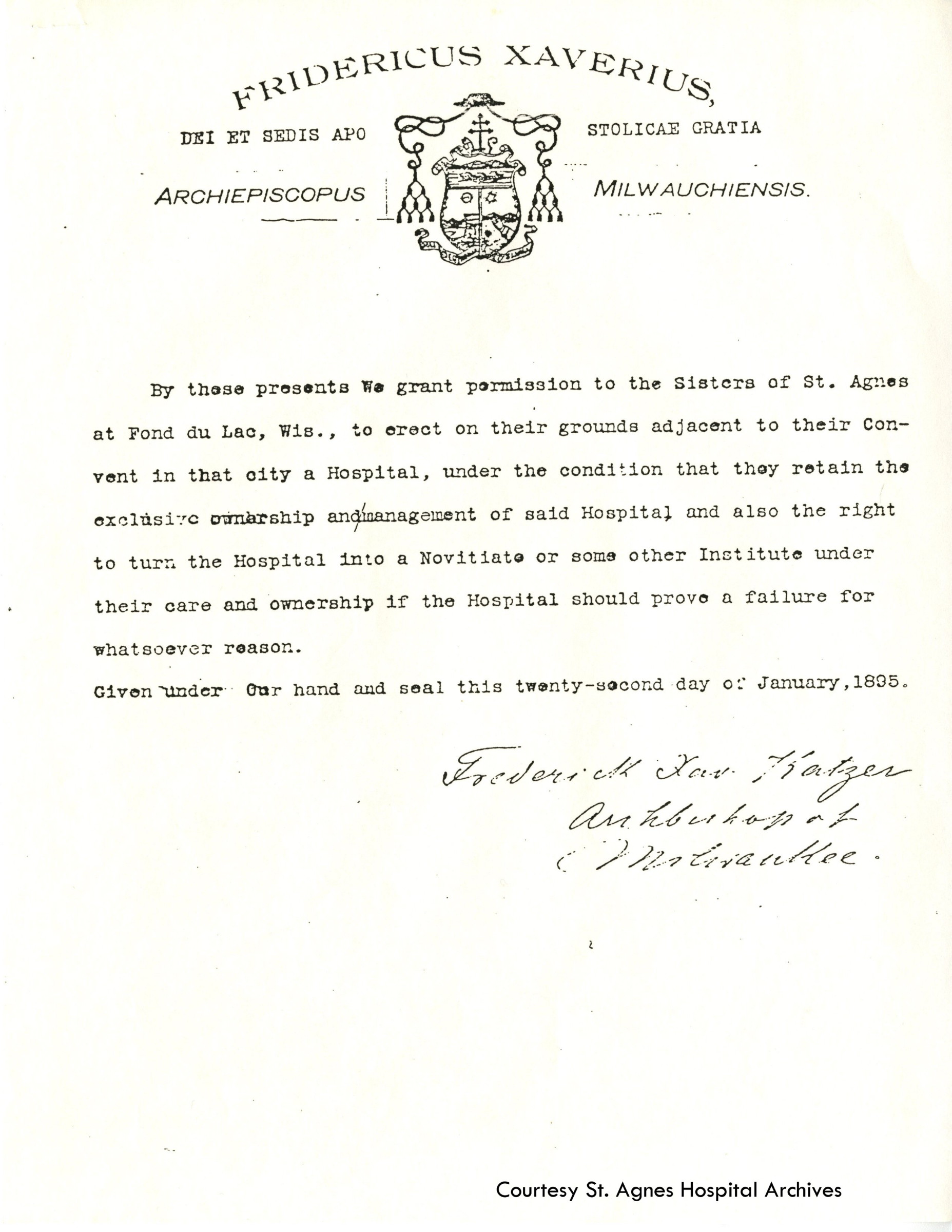 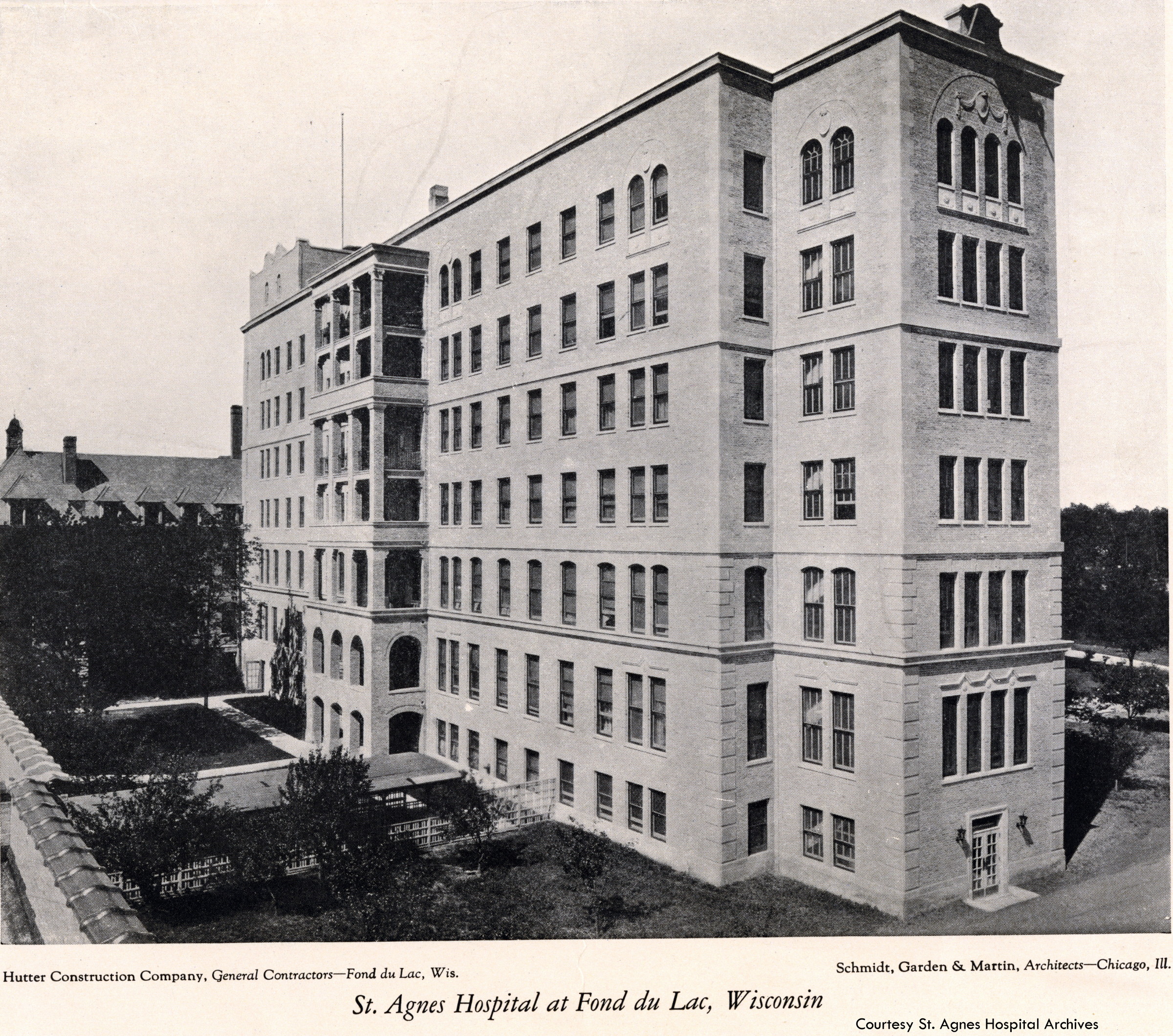 St. Agnes Hospital was founded in 1896 by the Sisters of St. Agnes after local business leaders had pleaded with the congregation for ten years to open a hospital. After St. Paul Hospital, an Episcopalian endeavor, failed after only a year in 1888, Dr. Frank Wiley, brothers John and Henry Boyle, and Father J.J. Keenan, pastor of St. Patrick Church, visited Mother Agnes Hazotte in 1894 asking her again to consider the establishment of a hospital for Fond du Lac.

In January 1895, the Fond du Lac Business Men’s Association pledged $55,000 for the project to be secured through loans and other sources. The CSA Board of Directresses minutes from January 25, 1895, stated “it appears... that the erection of a Hospital and its management by the Sisters would be a work of charity and humanity… for the care of the sick regardless of religious denominations.”

In addition to securing funding from business leaders such as the Boyles, and receiving approval from the Archdiocese of Milwaukee, the congregation also had to prepare sisters to staff and manage the hospital. Mother Agnes sent Sisters Evarista Ulrich, Amanda Hildebrand, and Charitas Schnitzler to St. Joseph’s Hospital in Chicago to study nursing and surgical techniques. Meanwhile, Dr. Wiley took postgraduate courses in Europe to prepare for his role as of chief of staff.

St. Agnes Sanitarium, as the hospital was called until 1900, opened on July 1, 1896, although seven-year old Otto Schmidt, suffering from typhoid fever, was brought in the day before as the hospital’s first patient. The final cost of the building, equipment, and furnishings was $47,965. Beds in a ward cost $5 and private rooms, board and nursing ranged from $8 to $15 per week.

Despite initial difficulty in attracting patients the first year, use of the hospital steadily increased and an east wing was added in 1913, more than doubling the 60-bed capacity. Other major expansion and modernization projects took place in 1924, 1954, 1974, and 2006. In 2018, CSA transferred sponsorship of St. Agnes Hospital to SSM Health.

In support of the community fundraising efforts in 1913, Episcopalian Bishop Reginald H. Weller praised the work of the sisters saying, “To my mind the whole responsibility for the hospital rests upon the Sisters of St. Agnes. It is their broad vision and their timeless work and support that has made this institution possible.” From these modest beginnings, CSA, which had traditionally been a teaching order, would eventually staff, administer, and sponsor hospitals and clinics in Wisconsin, Kansas, and Nicaragua; and educate 1575 nurses through its St. Agnes Hospital School of Nursing.