Dresser Mansion is one of several historic homes in the neighborhood built by wealthy individuals who made it rich in the booming oil industry during the early 20th century. It was built by its namesake, Carl Dresser, in 1920 when he was just 29 years old. Dresser's family business, Dresser Industries, manufactures and sells a variety of products that support the oil industry, including a pipeline coupling that Dresser invented and is still used today. The mansion is also significant for its stucco construction and Spanish-Eclectic style architecture. Interesting features include an asymmetrical facade, arches, and a terra-cotta roof. Inside, the house features textured walls hand glazed by Italian artisans, various colored tile flooring, a beamed ceiling in the living room, and many other decorative elements. Dresser Mansion is currently a popular wedding and event venue.

Built in 1920, Dresser Mansion is a fine example of Spanish-Eclectic architecture. 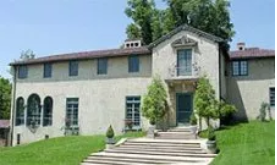 Carl Dresser was born in Bradford, Pennsylvania in 1890. After graduating from Princeton University in 1912, he moved back to Bradford to develop oil properties there (during college, he became president of his father's gas company in Ohio). In 1916, he became the secretary and treasurer of another company owned by his father, S.R. Dresser Manufacturing Company, which produced oil pipeline couplings that were used all over the world. In the coming years, Carl would become involved with many other oil interests, including becoming president of the Natural Resources Development Corporation of Tulsa (the predecessor to Dresser Oil Company). He and his wife, Pauline, moved to Tulsa in 1920. They only stayed for nine years as the oilfields became less productive. He and Pauline moved back east to New York City. Carl died in 1931 and Pauline remarried an heir of one of John D. Rockefeller's partners.