George Haigh, who would go on to own the Fayetteville Observer, owned a bookstore on the northwest corner of market square during the time that Charles Chesnutt lived in Fayetteville. Chesnutt often visited Haigh's store to talk, debate, and read. It was here that Chesnutt received some of the frankest advice on race and the South.

This 1885 Sanborn Map shows the location of George Haigh's bookstore at upper left. 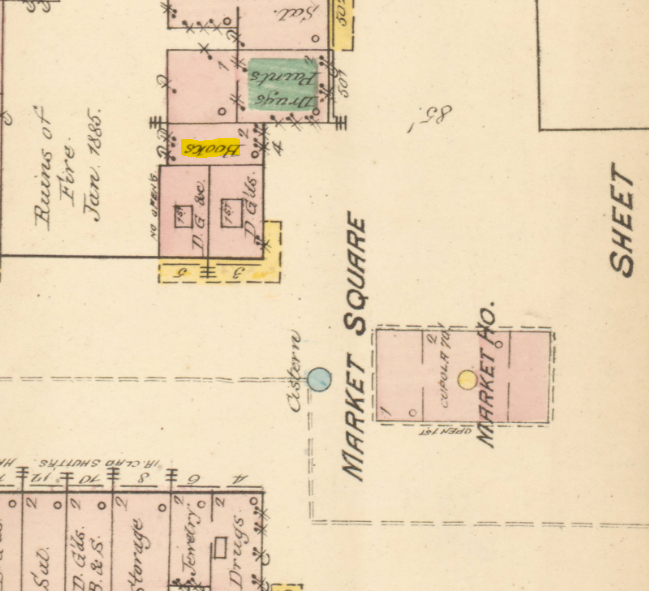 In the 1880 census, Haigh was listed as a 48-year-old bookseller whose parents were born in England. Haigh served in the Confederate Army during the Civil War and later would marry the daughter of Edward Jones Hale, founder of the Fayetteville Observer ("Death of Mr. Geo. Haigh").

Haigh and Chesnutt had several discussions on race and the effects of the war in which Haigh lamented the loss of the old order and the "best colored people" who left Fayetteville prior to the war (Chesnutt 134).

Chesnutt recorded one of these conversations which began with Haigh complaining that "you can't get a servant to do hardly anything" (126) after emancipation, to which Chesnutt responded:

"Well, you see, that is one of the results of slavery; - not of freedom as you are about to say. It is and has been for many years, the custom in the South, to consider labor dishonorable. And now that the slave is free, he naturally takes your view of it" (127).

This particular conversation has similar tones to discussions that appear in Chesnutt's final novel The Colonel's Dream. In the novel, the protagonist is a Confederate veteran who has returned to his hometown of Clarendon after years as a businessman in New York. It is entirely possible that Chesnutt's time around white men at Haigh's gave him insights he would later use in that novel.

Haigh, obviously by no means progressive in his views on race, allowed Charles to spend a great deal of time in his bookstore reading and engaging in conversation with other Fayettevillians.

Haigh, regarding the stratification of the South as unchangeable, ultimately appealed to Chesnutt's own sentiments by insisting that "the only way for a man who doesn't like it to do, is to go away where things are different" (Chesnutt 135).

Author Charles Chesnutt’s journals from 1874 to 1882 draw a picture of a restless young man of mixed race who spent much of his time in Fayetteville seeking an education both formal and informal. This tour highlights locations which were important to Chesnutt's life in Fayetteville during those years.