Situated along Wyatt Earp Boulevard is this large sculpture that commemorates the Texas longhorns that led cattle north from Texas to Dodge City. The steer that guided the large herds was called El Capitan and it would often make multiple trips. Artist Jasper D'Ambrosi, who was from Tempe, Arizona, created the sculpture in 1980.

The El Capitan sculpture was created in 1980 by Jasper D’Ambrosi. 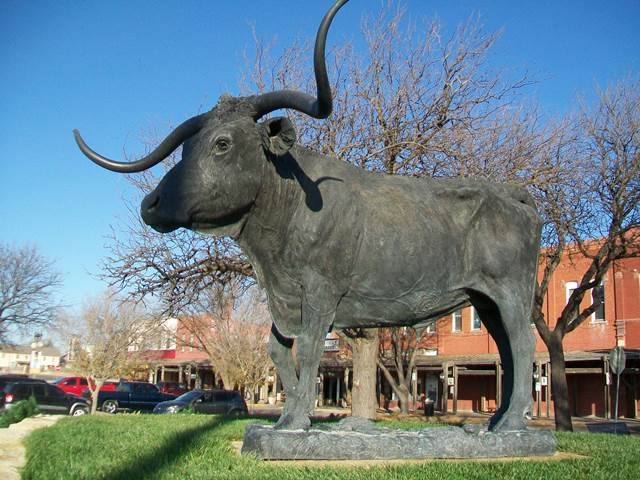 Before Dodge City became known as the "Queen of the Cowtowns", it was first known as the buffalo hunting capital of the world. The city was founded in 1872 but within just three years, the buffalo herds were all but gone. Cattle driving quickly took over as the city's primary source of income, as northern demand for meat was very high and railroad companies in Kansas also offered discount shipping rates. From here, the railroads shipped cattle to meat packing houses to the north and the east. At the height of the industry, 500,000 cattle passed through Dodge City in one year.

Cattle driving only lasted for ten years. Texas longhorns carried a disease—called "tick fever," "Texas fever," or "splenic fever"—that decimated many local cattle herds. As a result, the Kansas Legislature established a quarantine line that limited where Texas cattle could go. Fortunately for Dodge City, the line did not prevent cattle from going there but other cowtowns, as they were known, were not so lucky. In 1885, under pressure to quarantine the whole state, the governor did just that, thereby ending the cattle trade in Dodge City. It was later discovered that ticks caused the disease and could have easily been dealt with. However, by that point many areas Kansas and Texas had been fenced off, making it difficult for the cattle trails to be reestablished.