The bridge across the Monongahela River connecting Morgantown, West Virginia to nearby Westover via Pleasant Street is the third such bridge at that location. The first, a suspension bridge built prior the American Civil War, lasted until the turn of the twentieth, when the city replaced it with one of steel construction. The original bridge played a particularly prominent role in the Jones-Imboden Raid of 1863, when Confederate raiders set the bridge on fire during their occupation of Unionist Morgantown. Since its original construction the bridge to Westover has served as a vital thoroughfare for trade and travelers across the Monongahela River, stitching together the disparate communities of the area into Greater Morgantown. It has continued to do so on a daily basis since the second bridge’s replacement with the current bridge in 1977, which remains open to traffic on US 19.

Westover Bridge in 2017, forty years after its construction. 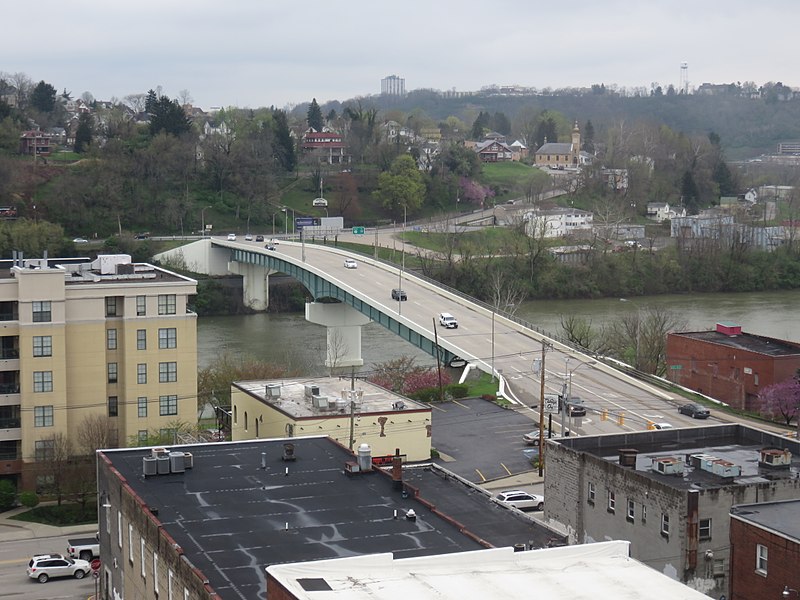 The original suspension bridge from Morgantown to Westover in 1856, two years after its construction. 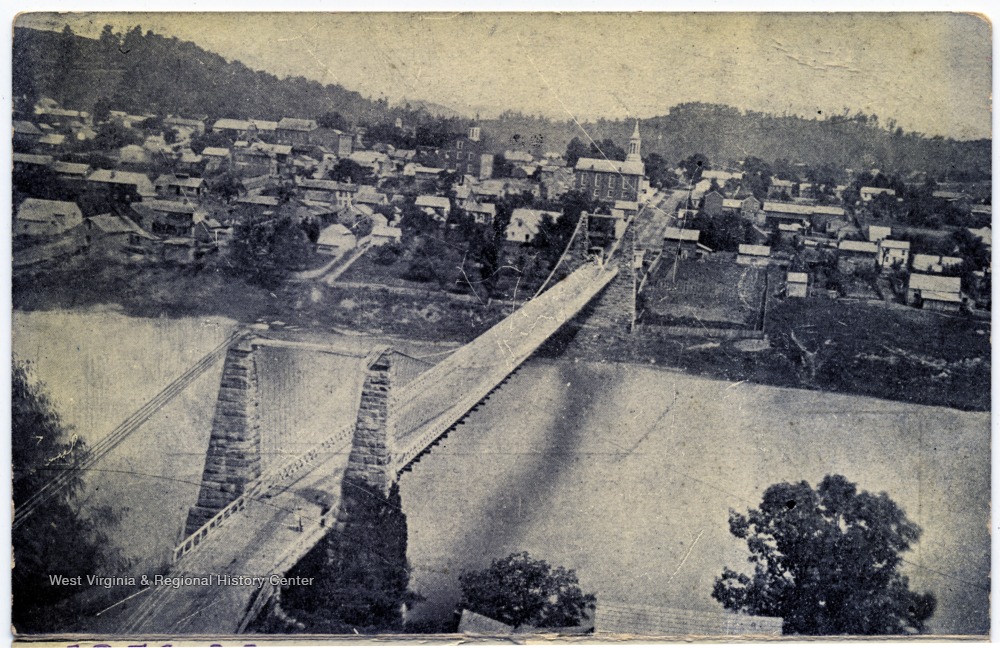 Construction on the second bridge the same year that it was completed, 1909. 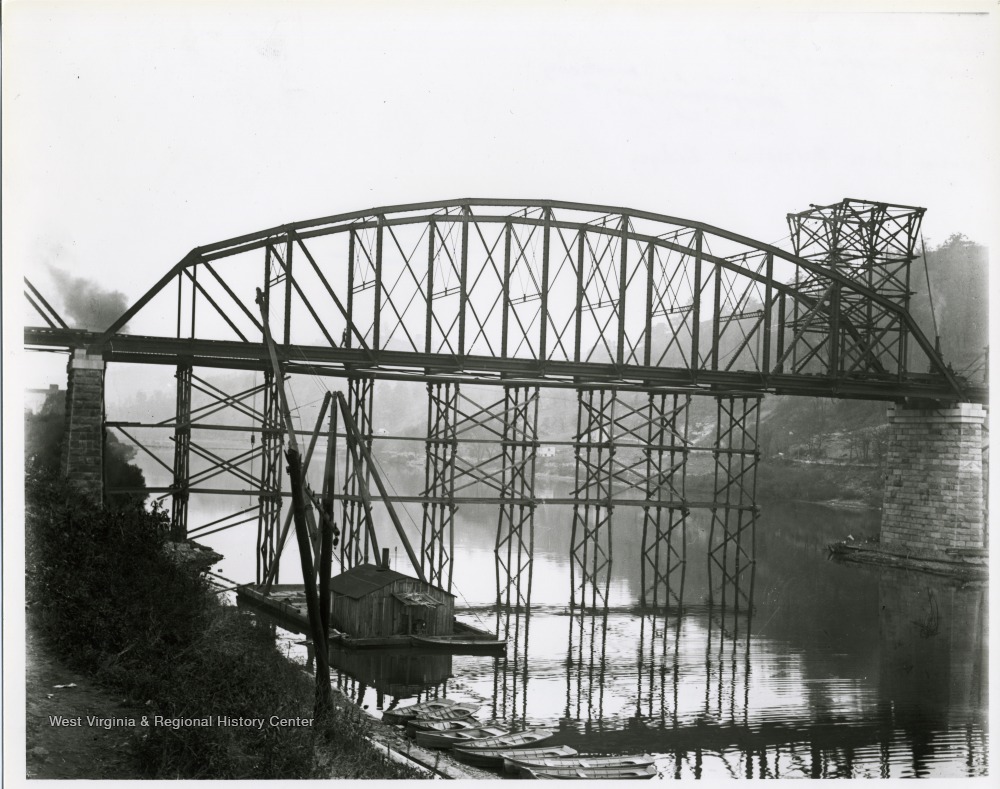 Dedication of the second Westover Bridge in on May 29, 1909. 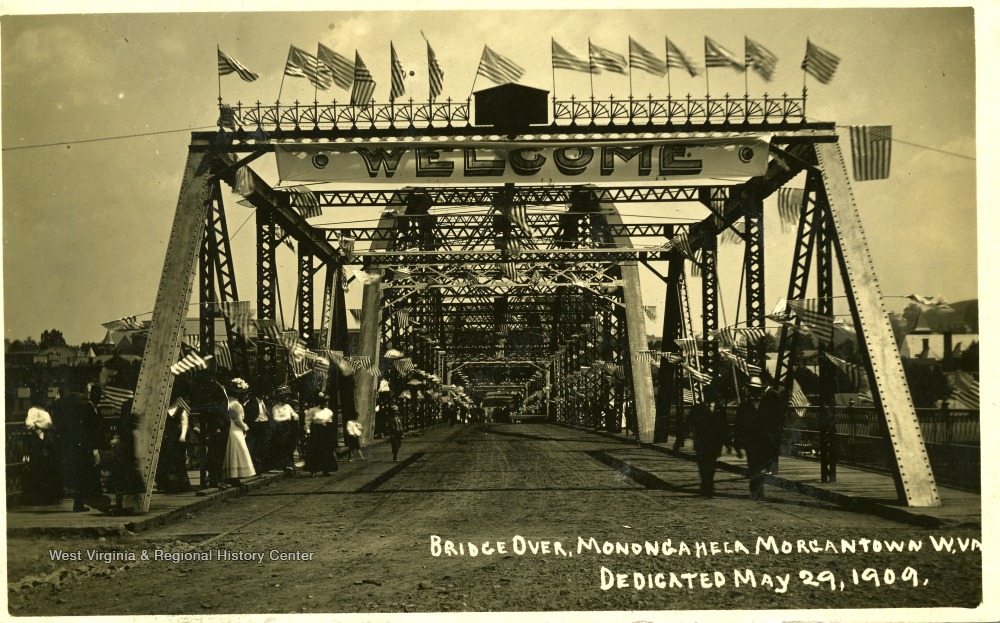 Prior to the construction of the original suspension bridge across the Monongahela River in 1854, area residents traveled back and forth via a ferry operated by Jesse Mercer from the western side. On days that the river ebbed low, meanwhile, travelers were able to cross at several area fords, among them one at the end of Walnut Street. Morgantown’s citizens had long agitated for a bridge across the river to supersede these crossings, but it was not until the Virginia Assembly’s passage of legislation on March 11, 1850 creating the Morgantown Bridge Company that those agitations began bearing fruit. Progress on the bridge was stymied, however, by the activities of Mercer in resisting its construction. Mercer’s ferry business was threatened by the possibility of a bridge and he owned the land on the western side where the bridge would most likely be located, making his acquiescence to the plan of paramount importance. Negotiations between the Morgantown Bridge Company and Mercer eventually secured that acquiescence, with the stipulation that he be paid $2,600 (a little over $73,000 today) for future damages and that his ferry be moved to another site on the river.

The bridge’s construction was also slowed by the reluctance of local investors to pay their subscription fees before any progress on that construction had actually been made. It would take the involvement of local physician Dr. Isaac Scott for that to change. In February of 1852, Scott attempted cross the Walnut Street ford after visiting a patient in nearby Fairmont and was nearly swept away by the current. The experience convinced him that of the new bridge’s necessity, a necessity for which he advocated in a series of anonymous letters to the editor in the Monongalia Mirror. In these letters he would pose alternately as an advocate of the bridge and an opponent, using his letters as an advocate to discount any objections that might be made against the bridge’s construction. The letters made the bridge a topic of frequent conversation in the town, and by March of 1853 the Morgantown Bridge Company had reached its funding goals and announced its decision to move forward with the actual construction of the bridge. They completed their work on December 16, 1854 at a cost of nearly $30,000 (almost $850,000 today). Two massive towers bookended the bridge on either side of the river with suspension cables stretched in between, and a tollhouse charged travelers one cent per hog, three centers per pedestrian, fifteen cents per one-horse vehicle, and fifty cents per four-horse vehicle ($0.28, $0.85, $4, and $14 today respectively).

This bridge came under literal fire during the Jones-Imboden Raid of 1863. Led by Confederate Generals William Jones and John Imboden, this raid was designed as a last-ditch effort by the rebellious south to prevent western Virginia from succeeding in its efforts to rejoin the Union as its own state. The raid began in late April, targeting in particular locations along the Baltimore and Ohio Railroad (a strategically important thoroughfare for troops and materiel from east to west). On April 26 Jones split his forces, sending John Hanson McNeill and his independent company of “Rangers” and the 12th Virginia Cavalry under Colonel Asher Harmon to destroy the railroad bridge at Oakland, Maryland. After doing so the raiders under McNeill and Harmon returned south, reaching Morgantown on April 28. Hearing reports from citizens of nearby Kingwood that 5,000 Confederates were about to reach them and having been abandoned by Senator Waitman Wiley, the town’s residents surrendered to a band of 80 men under Major Ridgley Brown (who were followed shortly thereafter by several hundred of their compatriots under Harmon).

Upon their withdrawal from the town the same day, the raiders set fire to the suspension bridge after crossing it on their journey to the west side of the river, but the order was countermanded. According to local legend, the countermanding came from Lieutenant William L. Wilson, an officer of the 12th Virginia Cavalry that later served as West Virginia University’s president from 1882 to 1883 before moving on to six terms as representative for the 2nd Congressional District (which included Monongalia County). Given that Wilson makes no note of such an order in his diaries from the Civil War and that he was wildly unpopular in Monongalia County as a result of his participation in the raid, however, it’s likely that the legend is a fabrication of the generation or two removed from the incident. This is especially likely since no mention is made of such an order in historical accounts closer to the period and the legend only begins appearing in accounts from the early 20th century onwards.

Having survived the war, the bridge remained in place until the completion of a steel replacement in 1909. The county had been endeavoring unsuccessfully to replace the suspension bridge for some time, with a bond measure to fund a new bridge failing by a vote of 858 to 1329 as late as 1906. A similar measure the following year passed, however, with a vote of 2,154 to 754 in favor. The dedication ceremony for the new bridge was held on Memorial Day, May 29, 1909 at 3:00 PM and featured speeches by 2nd District Congressman George C. Sturgiss and Congressman William Hubbard of Wheeling. This new bridge included tracks for the local trolley services, which was shared by the Union Utilities and Dunkard Valley lines and helped connect public transportation hubs across the area that had previously been separated by the Monongahela River. Prior to the inclusion of the trolley tracks on the bridge, travelers had been forced to disembark on one side of the bridge, walk across, and reembark on the other side. With the end of trolley service in the area in the 1920s and ‘30s the bridge was opened entirely to automotive traffic and continued to serve in that capacity after the construction of a new, concrete bridge in 1977.