Originally constructed between 1920 and 1921, this building is situated on the west edge of Hickory's historic commercial district. The building housed the city's administrative offices from 1921 to 1977, when these offices were relocated to the current municipal building. Since 1947, the municipal building has also been utilized by the Hickory Community Theatre, who renovated the building from 1984-87 and in 2013, when major renovations to restore significant sections of the building began. The building was added to the National Register of Historic Places on February 18th, 2000, for its architectural and political significance. Today, the building is still utilized by the Hickory Community Theatre as a performance space.

Historic view of the building. 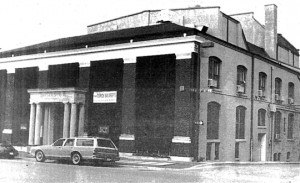 A modern view of the building

Charles Christian Hook, one of the most prominent North Carolinian architects of the early twentieth century, began planning the design of the municipal building in 1919, with construction taking place from 1920-21. It was designed in the Classical Revival style, with such features as the front-facing portico. Between the fall of 1921 and February 15th, 1977, the city's administrative offices were located in the building, and this time frame correlates with the waxing and waning of the economic power of the historic commercial district of Hickory, NC. For example, by 1968, the Catawba Mall opened down US 70, which resulted in less commercial activity in downtown Hickory.

Between 1984 to 1987, the theatre consulted architect Craig M. Copper to create renovation plans for the auditorium, dressing rooms, and stage. The electrical and mechanical systems were also improved. In 2013, a second wave of major renovations began that would restore the original box office, the Fireman's kitchen, and bathrooms.

The building was officially added to the National Register of Historic Places on February 18th, 2000, for being deemed architecturally and politically significant. Today, the building is still solely occupied and utilized by the Hickory Community Theatre as a performance space.