The VMI Museum was created in 1856 by Superintendent Smith after he accepted a Revolutionary War musket. The museum holds, preserves, and exhibits artifacts of VMI heritage and has over 15,000 artifacts in its collection. One of the major attractions is General "Stonewall" Jackson's horse "Little Sorrel" which is on display in the museum.

Picture of the VMI Museum 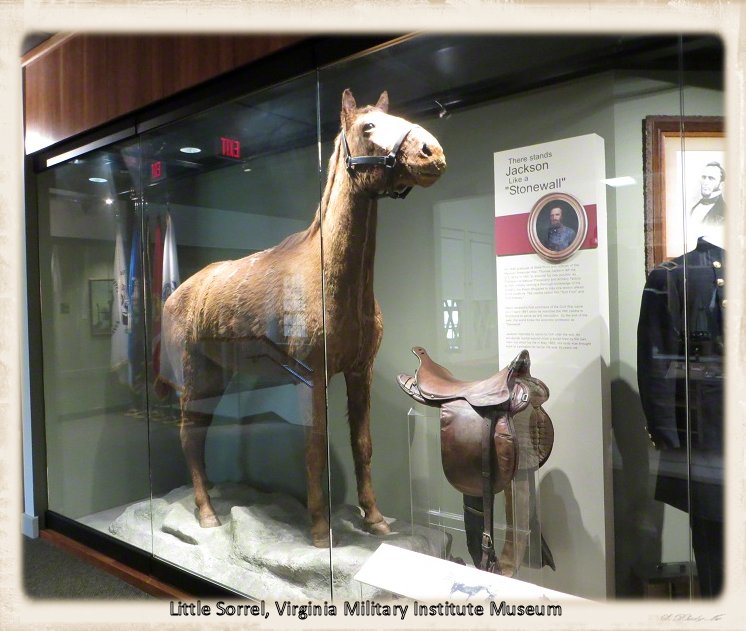 The VMI museum was created in 1856 by Superintendent Smith and was created when he received a Revolutionary War musket. It currently holds over 15,000 artifacts in its collection. There are four major permanent exhibits at the museum and they are, The Henry Stewart 19th Century Antique Firearms Collection, VMI involvement in the Civil War, Military and Civilian Accomplishments of National Importance, and "Stonewall" Jackson at VMI.

The Henry Stewart Collection is a collection created by Henry M. Stewart Jr., a graduate of the university in 1935. A lot of the collection are one-of-a-kind or are the only known surviving type of firearm or patent office model. (1) There are over 800 pieces in the collection and currently 50 rare pieces on display, even though the university plans to eventually open them all up to the public serious researchers can make appointments to see artifacts. (1) Some of the big items are the air rifle carried by Lewis and Clarke, the Artemus Wheeler Revolving Carbine (one of four) bought by the US Navy, several Colt Patterson Firearms, and an engraved Porter Rifle. (1)

Since the school was created VMI alumni have helped to make history in America. The Military and Civilian Accomplishment exhibits follows the most famous of VMI alumni who have won Nobel Prize's, Pulitzer Prize's, explorers, movie stars, and politicians. (3) They include 11 Rhode Scholar winners, 7 Medal of Honor recipients, and 226 Flag Rank Officers. (3)

The final exhibit is the "Stonewall" Jackson exhibit. Jackson had a big influence on the community being active in both business and religious activities and teaching at the university. (4)  The exhibit has memento's from Jackson's life. It currently holds his favorite hat, two uniforms, items from his classroom, and his horse "Little Sorrel" after it died. (It is one of two horses mounted at death) (4)  Jackson was the first faculty member of the university to die since it was created in 1839 and his body was brought back and held in state in his old classroom until it was buried. (4)