This monument was installed in 1991 to honor the 141st Infantry Division. Also known as the Alamo Regiment, it is the oldest militia in Texas. The marker lies at the intersection of Losoya Street and Market Street in San Antonio. The 141st Infantry Regiment was formed on October 15, 1917 and served in World War I under the Meuse-Argonne steamer. 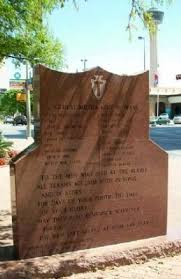 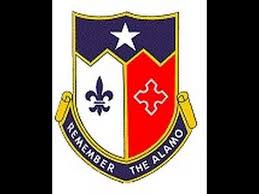 The monument was constructed on April 13, 1991 by the San Antonio Chapter 36th Division Association. Inscribed on the monument is the Regiment’s motto "To the men who died in the Alamo: All texans acclaim both both in song and in story the days of your youth-the days of your glory. May they also remember, whenever they go, The men left behind at same far Alamo." The Monument stands in remembrance of the 141st Regiment. Some of its units date as far back as the Texas Revolution; these included Group A First Texas, The Austin Greys, The Bryan Greys, Calvert City Guards, The Jones Rifles, The Manning Rifles and, The Navasota.

The 141st Infantry Regiment was formed at Camp Bowie in Fort Worth, Texas. Created from Texas troops that were drawn from the first and second Texas National Guard. On August 6, 1918 the regiment landed in France. They trained at the 13th training position that they that was located near a bar called the Sur Aube. After training, the regiment moved in to support the 9th and 23rd Infantry Divisions. The Divison’s most notable action during the war was its participation in the Meuse Argonne Campaign In October 1918. Although the Regiment lost 1,227 enlisted and sixty-six officers during the battle before being relieved on October 26 by the 72d Brigade.

After the end of World War I the regiment was disbanded. It was reactivated in early 1922, and trained at Camp Hulen from 1926 until 1937. The regiment was recruited for federal service on November 25, 1940. It was eventually assigned to the 36th Infantry Division. The regiment participated in the invasion of North Africa in 1943.

During World War II the 141st Infantry Division was in active combat for 361 days. First the regiment set sail for France after taking part in rigorous training at Camp Bowie where the regiment was created and finally arrived on August 6th. Serving 137 days in Italy, 204 days in France, 17 days in Germany and only four days in Australia. All together suffering 6,000 casualties as well as 5,000 wounded. Although the 141st Infantry Division suffered extensive casualties they managed to kill around 1,126 enemy soldiers in relation. Along with capturing 700 German soldiers in the Siegfried line, or Germany's main line of defense on March 23. As well as being the fist American troops to set siege to Hitler's Europe at Seberno Beach, Italy on September 9, 1943.

This monument represents the 141st Infantry division, as well as their contribution to both World Wars. This monument stands in remembrance of those who bravely fought in the 141st Infantry Division, or died for the Infantry Division. This monument also stands for all of the sacrifices and bravery that the regiment underwent. For their bravery the regiment received 2,614 medals and awards. Including three Congressional Medals of honor; thirty-one Distinguished services crosses; twelve Legions of Merit; four- hundred and ninety-two sliver-stars; eleven Soldier's Medals; one thousand six hundred and eighty five Bronze Stars; shirt four Division Commendations; and forty Foreign Decorations.

*This figure includes hospitalized personnel only