Built in 1926 and originally called Central Presbyterian Church, First Presbyterian Church is a fine example of the Gothic Revival architectural style. It is located south of downtown Amarillo in one of the oldest neighborhoods in the city called the Plemons Addition. The church was erected during a period in which the city grew significantly thanks to the booming oil and natural gas industries. It was added to the National Register of Historic Places in 1991.

First Presbyterian Church was built in 1926 and is a good example of Gothic Revival architecture. 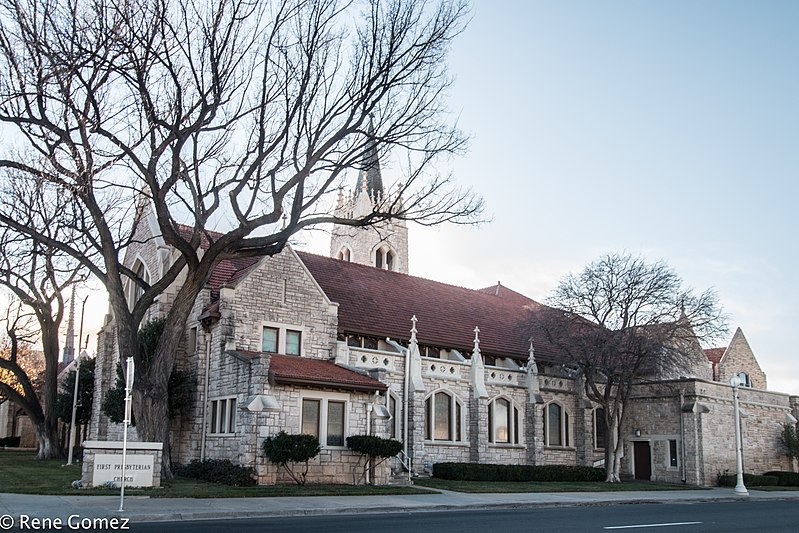 The church was established in 1890 as the Cumberland Presbyterian Church. Two years later, it built the first church building at 620 Fillmore Street. During the next several years the church congregation grew and eventually, it became clear that a new building was needed. As a result, the congregation erected its second home at 1000 Taylor Street and named it Central Presbyterian Church in 1909. As noted above, the city grew quickly in the 1920s; the congregation mirrored this growth and soon became too large for the building on Taylor Street.

This is what prompted the construction of the current building, which took about two years to complete. Over time, additional structures were built creating a large complex that includes an education building and a chapel. Interesting features of the church building itself include flying buttresses, lancet-arched openings, and Tudor-arched stained glass windows. It is unclear when the church's named was changed to its current one.