Constructed in 1931 by Allegheny County, the McKee's Rocks Bridge spans along the Ohio River between Pittsburgh and the boroughs of McKees Rocks. The bridge stands as a significant symbol of the intensive bridge-building campaign during the later-1920s and 1930s. Even though the bridge took two years to build, there was a 15-year negotiation between Allegheny County and the U.S. War Department before the construction of the bridge could begin. The bridge is also an important architectural structure within Pittsburgh due its two-hinge metal through arch design and a Pratt Stiffening truss, which are similar features used to build the Hells Gate Bridge in New York. Almost 50 years after its construction, the McKees Rocks Bridge was listed in the National Register of Historic Places in 1988. 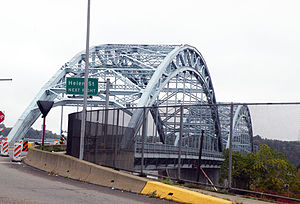 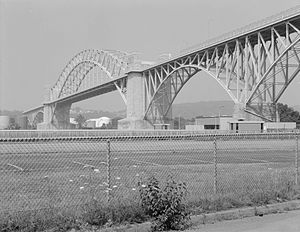 The Allegheny County Board of Commissioners petitioned to Congress about the channel span length, and in 1919, Congress approved the Board's petition granting, "the county of Allegheny, Pennsylvania, to construct, maintain, and operate a bridge across the Ohio River at or near McKees Rocks Borough." Even though the channel span was reduced to a more reasonable size, the Army Corps of Engineers did not agree with these plans and did want to assist with the county's pans to build the bridge. This left the plans for building the bridge to be untouched for several years.

It was not until 1928 that the project revived, and in 1929, the construction of the bridge began. The Allegheny County Department of Public Works was responsible for supervising the design and layout of the bridge's construction. After the death of Chaflant, Vernon Corvell stepped in as the Chief Allegheny County engineer and the leading creative force of the project. After two years of construction, the McKees Rocks Bridge opened on August 19, 1931. The grand opening of the bridge was celebrated with a parade consisting of over 2,000 cars. Designed by Corvell, the bridge has a 750 foot-long steel main span with a two-hinge metal through arch design and a Pratt Stiffening truss. Other design elements of the bridge include tow-hinge deck arches, deck trusses, and girders. All of Corvell's designs implemented into the bridge are strikingly similar to the features of the Hells Gate Bridge in New York.

Later, the McKees Rock Bridge was tied into other county projects, such as the construction of the Ohio River Boulevard and a triple-tiered highway system comprised comprised of riverside boulevards, radial highways and circuit routes. In 1961, the bridge was acquired by the Pennsylvania Department of Transportation when Pennsylvania legislature passed an act of taking over state and county highways, tunnels, and bridges. In 1988, the McKees Rocks Bridge was listed in the National Register of Historic Places.