Designed in 1887 by Frederick Law Olmsted, a distinguished architect in the Northeast during the 19th Century, Audubon Circle is a historical landmark in the Fenway neighborhood. The 250-foot circle demarcates the intersection of Beacon Street and Park Drive, hosting a variety of fashionable residences constructed between 1888 and 1915 (History). The intersection is also home to what is now known as Ruggles Church, as well as the Boston University student neighborhood known as South Campus.

Aerial view of Audobon Circle, prior to its renovation 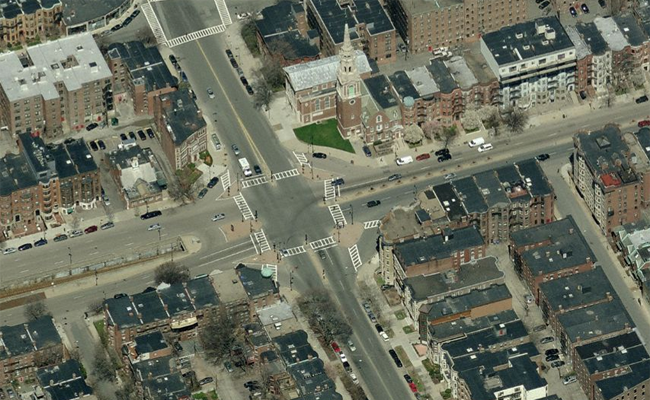 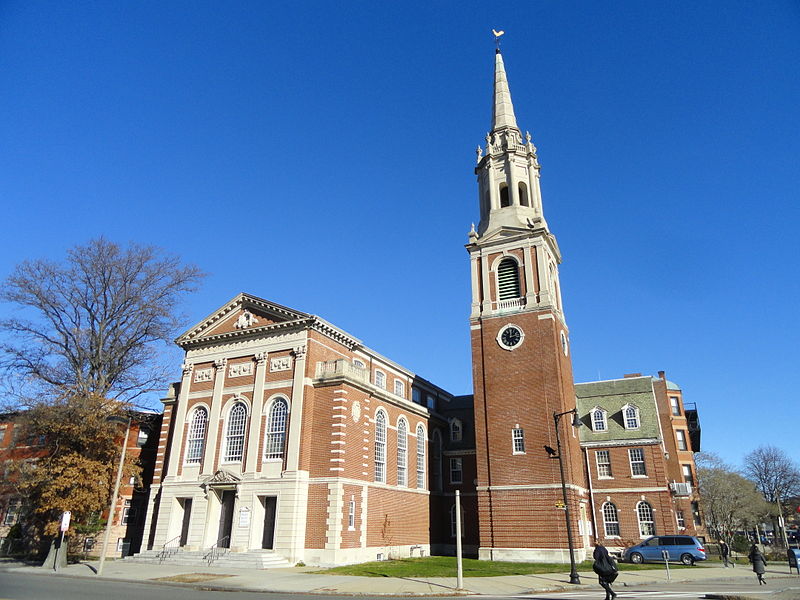 Audubon Circle maintains its importance as a gateway to a region of the Greater Boston Area known as the Emerald Necklace. Also devised by Frederick Law Olmsted, the Emerald Necklace embodies the system of parks and natural areas that culminate in Boston's extensive green space. This green space became the blueprint for similar parks and other landscape architecture projects across the United States.

"Like the prototypes that Olmsted developed for the large urban park, the playground, and the landscaped boulevard, the park system he devised for Boston became the prototype for similar systems in Kansas City, Cleveland, Cincinnati, Seattle, and many other American cities" (Garvin 60). Moreover, his work pervaded the most populated corners of the U.S. including New York City's Central Park and Washington, D.C.'s capitol grounds. "As a landscape architect, [Olmsted's] firm was involved in the design of nearly 5,000 projects in 45 states and several countries" ("Frederick").

In addition to his contributions to urban planning, Olmsted was an early advocate for the kind of sustainability movements that hold increasing relevance today. For instance, he led the movement for the protection of Yosemite National Park and Niagara Falls, indicating a commitment that reached beyond the development of urban spaces.

Audubon Circle mediates the Fenway neighborhood and Boston University's South Campus, a residential area on the cusp of the Fenway and Brookline areas. Due to the influx of residents including student housing, "the has Circle devolved into a congested traffic rotary, formidable in scale to any pedestrians who dare to cross it," says Crosby Schlessinger Smallridge, a Bostonion urban planning firm involved in the revitalization of Audubon Circle ("Audubon Circle").

An early insight into this transformation of Audubon Circle's community was detailed in a 1974 neighborhood profile drafted by the Boston Redevelopment Authority, concluding that the most influential shifts in population during the time were due to "the loss of families and wealthier residents and the increase in young adults" ("Preliminary"). The report viewed Boston University's development in the area as an unwelcome nuisance and stating that "the uncontrolled and rapid expansion of Boston University and Northeastern University have had a severe negative impact on the district" and recommending a new policy to reshape the way that universities in the area grow.

The burgeoning youth population noted in the 1974 report has not gone away. According to the Boston Planning & Development Agency's 2017 neighborhood profile, the number of people ages 18-24 is triple the citywide statistic, and 43 percent of Fenway households reside in "dorms or other institutions ("Neighborhood Profiles").

In 2017 Boston's Mayor Martin J. Walsh announced plans for the renovation of Audubon Circle to make it a safer and more inviting space for pedestrians. The main emphasis on changing the structure of the Circle's intersection is for safety, a crucial part of making Audubon Circle as welcoming as it was when the Emerald Necklace had just been finished. Regarding the student population in the area, many of whom are foreign or from out-of-state, the project aimed to recapture the inclusive inspirit of the original Audubon Circle, attempting to make the Fenway neighborhood and Emerald Necklace more cohesive parts of the town.

The improvements undertaken to accomplish these goals include the additions of crosswalks to make the streets more easily traversed by pedestrians, new bike lanes on Beacon Street bike, and improved street lighting and road markings. The most striking change was a restoration of the general design of the original rotary that was brought about by the addition, at each of the corners of the intersection, of circular green spaces with new lighting installations and seating areas. The low walls on the gardens are inscribed with poems chosen by American poet and Boston University professor Robert Pinsky. Their authors include Robert Frost, Emily Dickerson and the former Audubon Circle resident Derek Walcott. All of the poems are concerned with birds (Treffeisen).

In keeping with Olmsted's vision of sustainability, "the gardens are designed to be environmentally friendly and will utilize a water capture system that directs rainwater into the garden areas" ("Audubon Circle Redesign Update"). Moreover, nearly 50 trees will be planted surrounding the intersection, and the permeable pavements will be added, allowing rainwater to recollect in the ground.