During the 1920s, the popular beach town of New Jersey, Asbury Park’s boardwalk saw dramatic change as more businesses located in the area to accommodate tourism and support a growing commercial district. At this time the construction of the Paramount Theatre and Convention Hall complex, the Casino Arena and Carousel House, and two red-brick pavilions accompanied an influx of summertime tourists. The Casino and Carousel house has been preserved and remained unchanged since 2006. In an attempt to pay tribute to its history, the original architectural design remained through the redevelopment and rehabilitation process a testament to the effort of local citizens and to preserving the community's historic landmarks. 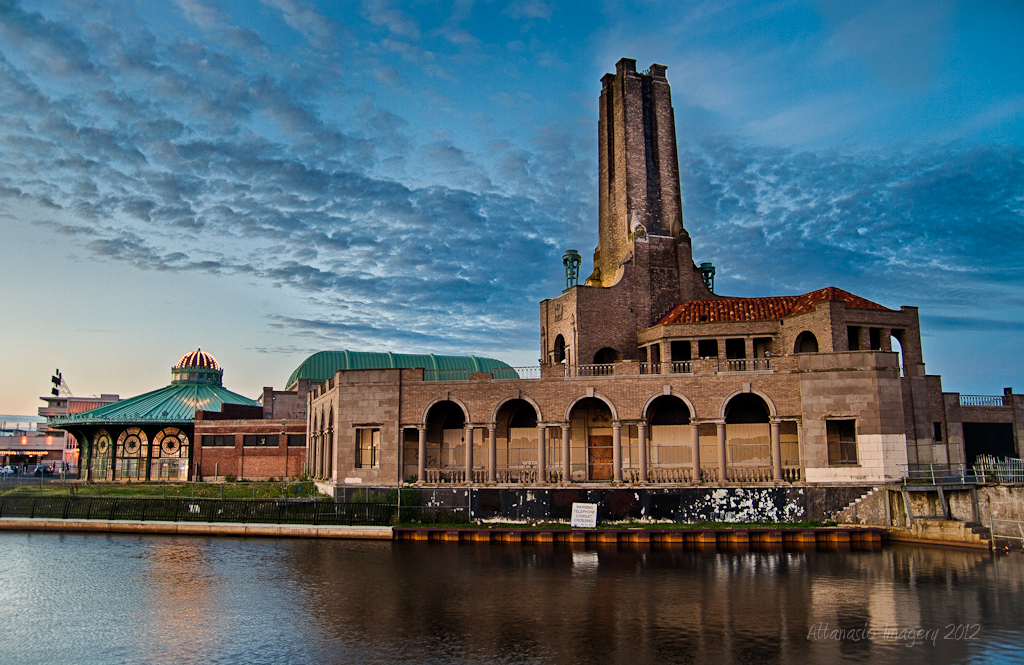 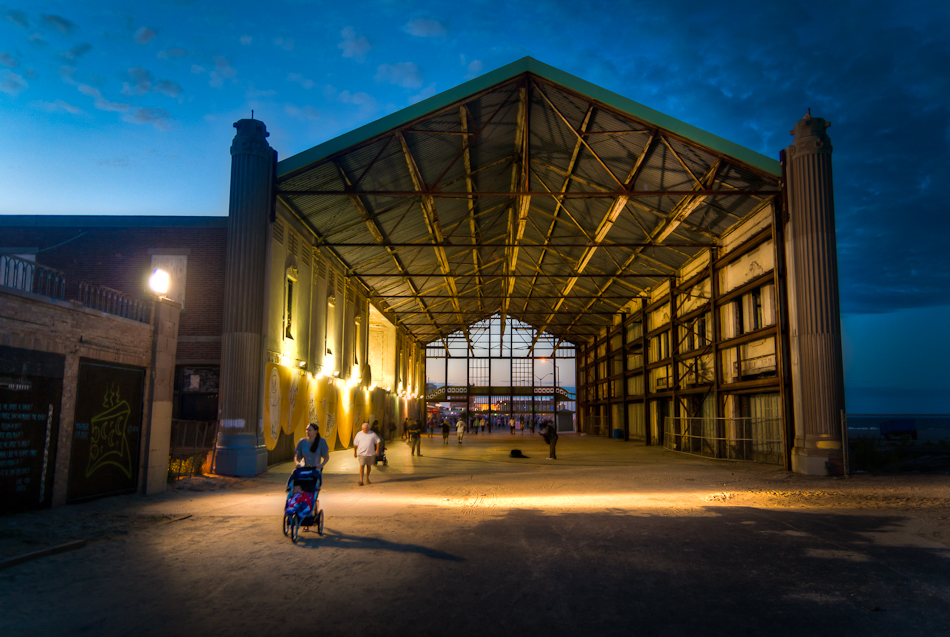 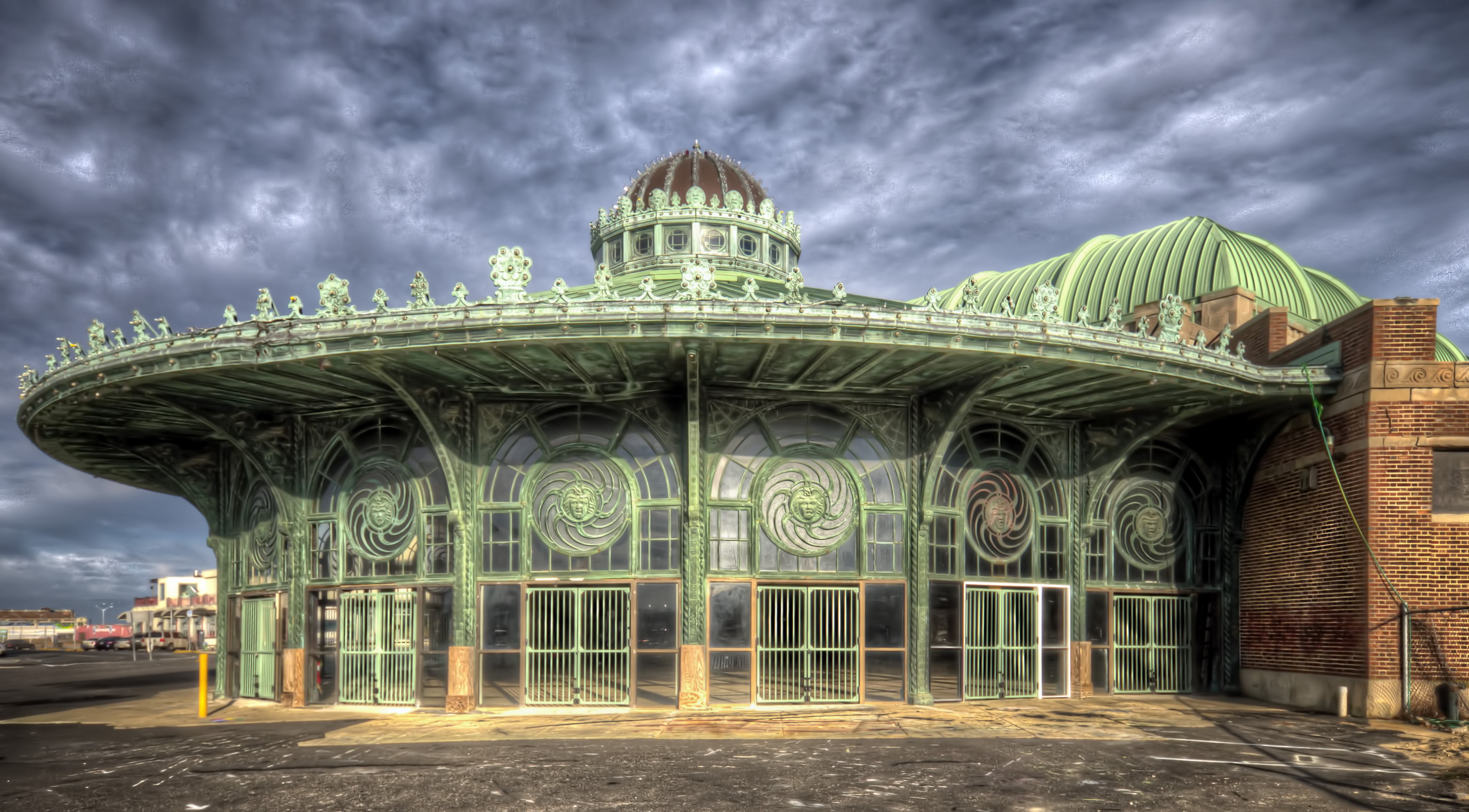 1930's postcard of the Casino and Carousel in Asbury Park. 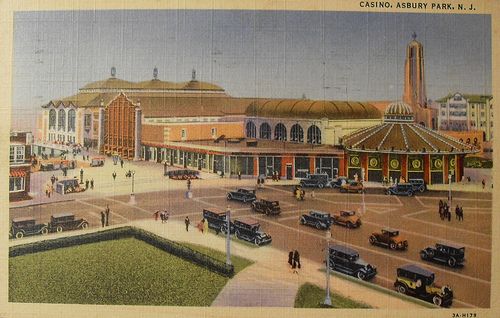 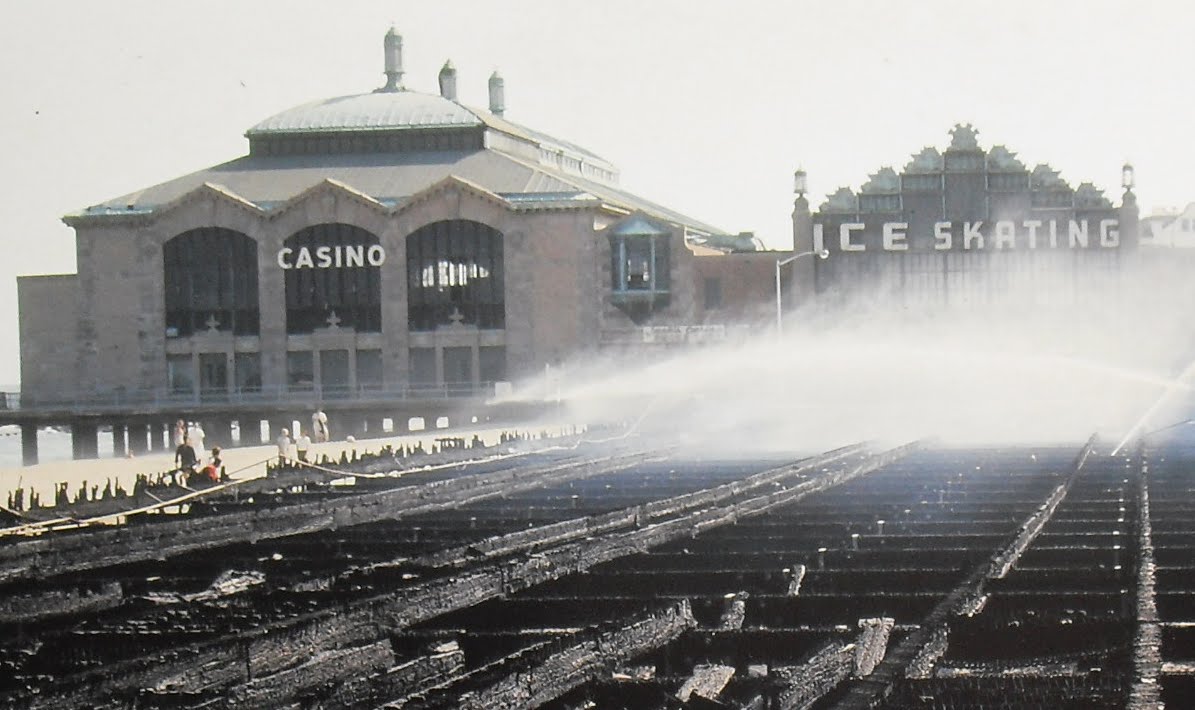 The Asbury Park Casino, its accompanying arcade, ice skating rink, and carousel house, transformed the 1929 beach town into one of New Jersey's top premier resort towns. During this time the growth of the boardwalk itself brought in an influx of summertime tourists and the building of new real-estate encouraged more people to move to the shore seasonally. This casino and carousel complex offered a wide range of amusements allowing for year-round excitement. The upcoming cultural destination brought in visitors from all over with the town being a growing source of entertainment.

The initial foundation of a Casino on the Asbury Park Boardwalk was built replacing the preexisting Bradley Pavilion structure. The Casino, built during the winter of 1903 was finished a year later in 1904. In January of 1928, the Casino was destroyed due to a fire leaving the city commissioners to join together and lay plans for the replacement of the landmark. Starting from a paint shop on the west end of the boardwalk the fire spread rapidly and burned for two hours before being put out. The destruction of the twenty-three-year-old casino left the boardwalk without an amusement center. The city itself suffered a $300,000 loss while also losing the radio station, casino, and several boardwalk concessions.  The loss of the Casino became the most costly, not only were the instruments of the orchestra lost but the meeting place of businessmen for expositions and gamblers, or those looking to be entertained.

Construction of the new Casino and Carousel House began in May of 1928 and was step number two of Asbury Park's five million dollars beachfront program. During the time the Casino's architecture was noted to be "one of the most handsome". This newer Casino replaced the pre-existing one that was lost a year earlier due to a fire. Being built of brick and limestone with copper trim, this new exterior would act as an attempt to prevent the risk of another fire. The elaborate structure of the building included an archway over the boardwalk that was also copper and had a design of winged seahorses, paying tribute to the mythological god Poseidon and the sea. The arcade connected to the new casino in the same manner as the old, on the east and west wings.

For the next couple of decades, the full extent of the Casino became a place of enjoyment for the summertime tourists and year-round residents. It was a place for businessmen and gamblers, ice skaters, and gamers. It welcomed all. However, poor construction continued to lead to deterioration of the building as upkeep exceeded revenue.

Skate culture in Asbury Park has existed for decades and the seventies were no exception. The Casino house was more than just a Casino. One of its remodels left it as the Casino Arena Skateboard Park and allowed for competitions to be held within it. Young competitors were asked to ride up the 22-foot wall with a 75-degree incline. This competition brought the public into compete and watch as well as allow for professionals to come and compete and meet their fans. More than 1,200 amateurs and 200 professionals were anticipated to compete in the second annual SKA-BO Eastern Skateboard Associations championship. Skate culture was moving from the west coast to the east becoming popular around coastal beach towns being a replication of surfing a wave out of water.

The casino closed in the 1980s. The skating rink portion, the arcade, casino, and carousel all closed their doors due to an improperly installed roof. Storms aided the closure by adding further damage to the roof making it unsafe on the inside. After that in the 90s the carousel portion opened back up to be used as a flea market to continue to encourage visitors and make use of the beautiful historic space.

In 2005, the ruined state of the Asbury Park Casino on the boardwalk has an appearance similar to that of old abandon factories. In the more recent years, private actors have attempted to revive the city and currently, the Asbury community is being built back up. However, the beach town is transitioning into the illustration of the postindustrial consumer city phenomenon. Instead of focusing on the history of Asbury and working for the preservation of historic buildings like the Casino and the Carousel House these private actors are building higher high-rises and rehabilitating the housing market. Still abandoned today, the Casino has not seen any signs of plans to be repaired and refurbished. The damage to the roof increases with the years and it will not be long before it will be demolished within this small city's redevelopment.

Asbury Parks newest skate park opened its doors to the public in 2016. The Carousel house again underwent remodel this time completely changing its purpose. As a tribute to the skate culture in Asbury Park, one of the advisers on the Asbury Park Skateboard Foundation explained the changes being done and the input of a donated 3.5-foot skate bowl donated by Red Bull. Welcome to all ages with times of free skate the Carousel house again opened to the public but, it was more than just a spot for skaters. Live bands, artists, and fundraisers all encourage visitors of all backgrounds to visit the space and have a place to skate without the fear of getting kicked out. The underlying goal was to provide more than just a skate park but, to build a community to help change minds and stigmas surrounding skate culture.