Constructed in 1902, this Akron building was constructed as a multi-level apartment complex as well as a commercial space. The first stores to occupy this building were a barbershop, a savings and loan company, a cigar shop, and a restaurant. Over the years, the building's conversion from retail to office space reflected the transition of the neighborhood and growth of Akron. By the 1920s, the second floor began to occupy multiple offices that reflected the city's growth, such as an insurance company and a real-estate business. In 1929 the fourth floor of the Gothic Building became a music school for the Akron Institute of Music. The Gothic Building later became home to Edfred’s Record Store in 1941 and All-Ohio Athletic Equipment in 1962. In the decades that followed, the building continued to serve as office and commercial space and was restored to more closely match its stately tunn-of-the-century appearance in recent years.

The Gothic Building as it currently stands 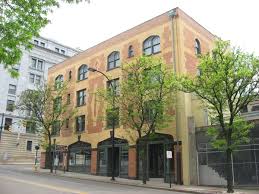 The Gothic Building was constructed in 1902; architect Frank O. Weary designed the four-story brick building. Weary was also responsible for preparing the drawings that would later become the Akron Academy of Music. Weary also helped rebuild Chicago after the great fire of 1871. The property that The Gothic Building is currently standing on was purchased in 1902 by Jennie A. Dobson and Grace B. McIntosh for $6,000. The contract for the land stipulated that architecturally, the building had to be a brick building with a front harmonious and in substantial conformity with the Mill Street facing side of the Colonial Theater. The contract also stated that the building shall be finished by October 1, 1902.

The building was set up to have a 1st story as a commercial space that could fit four various stores. The other three stories were used as housing for Akron citizens. The building was initially inhabited by the middle management and other professionals who worked for the city of Akron. Four stores were occupying the bottom floor/commercial center when The Gothic Building first opened. Those initial stores were a barbershop, a Savings and Loan Company, a cigar shop, and a restaurant. The building slowly changed from a residential and shopping building to a more office-oriented space. The second floor began to occupy multiple offices, such as an insurance company and a real-estate business.

The Gothic Building still stands in Akron, occupying a similar purpose as to what it was initially constructed for. In 2007, Tony Troppe purchased The Gothic Building as part of Gothic City Revival Group LLC, a group of private investors. In recent years, the building has hosted numerous musicians as a venue and serves as the headquarters for Leadership Akron.