The Old Donation Episcopal Church was built in 1736. It is the third building to serve the colonial era Lynnhaven Parish, which was established in 1642. The church received its present name in the early 19th century likely in commemoration of a gift of land. An 1882 fire left only portions of brick walls standing. The building was restored in 1916, and the church’s bell tower was erected in 1923. The Old Donation church underwent major repairs in the 1960s to ensure the buildings structural integrity. It was during this time that the slate floors were installed. These renovations were completed in 1966. The Old Donation Church was listed on the National Register of Historic Places in 1972. 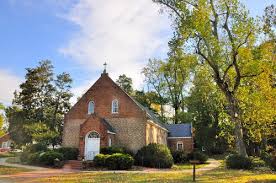 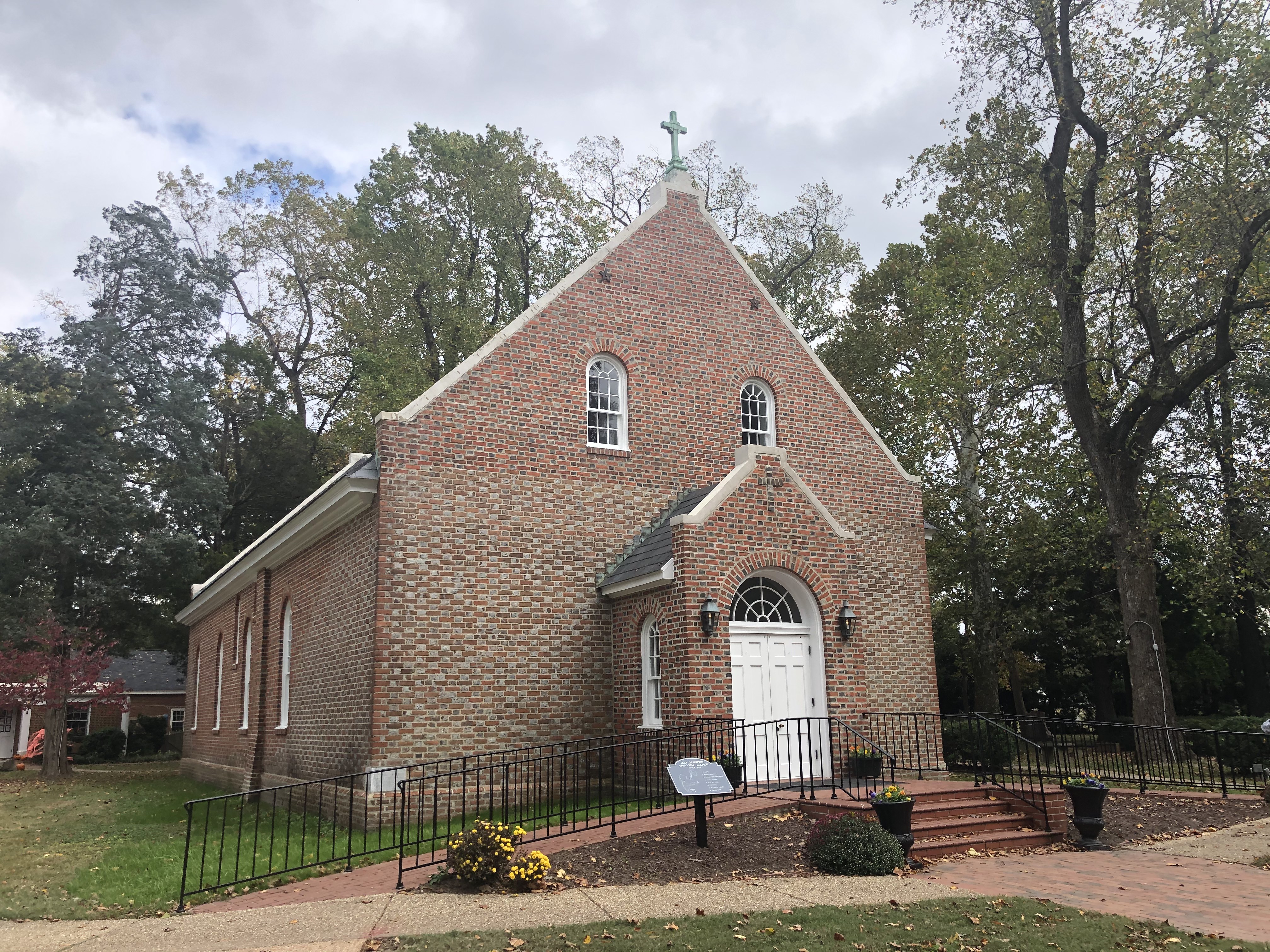 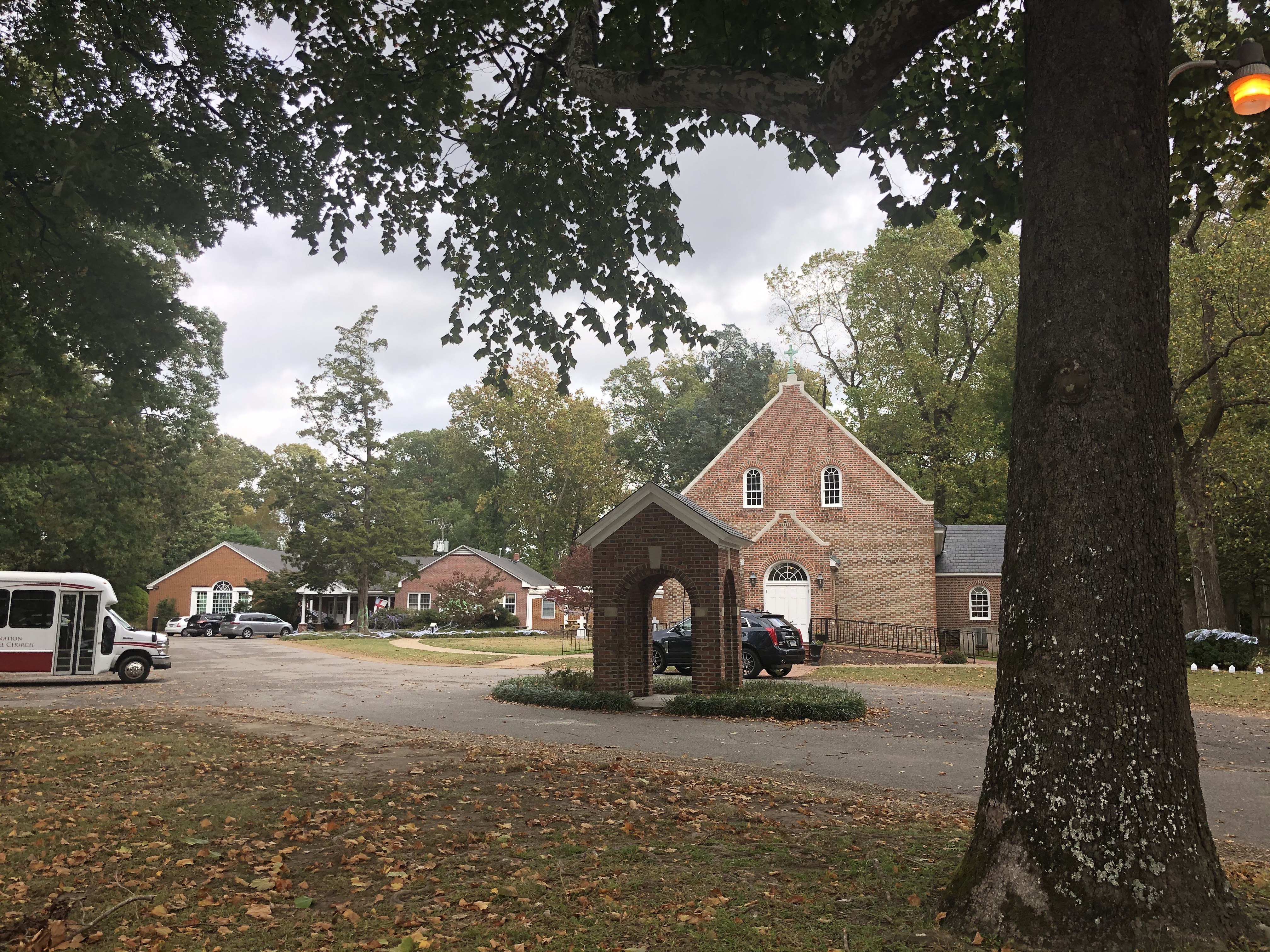 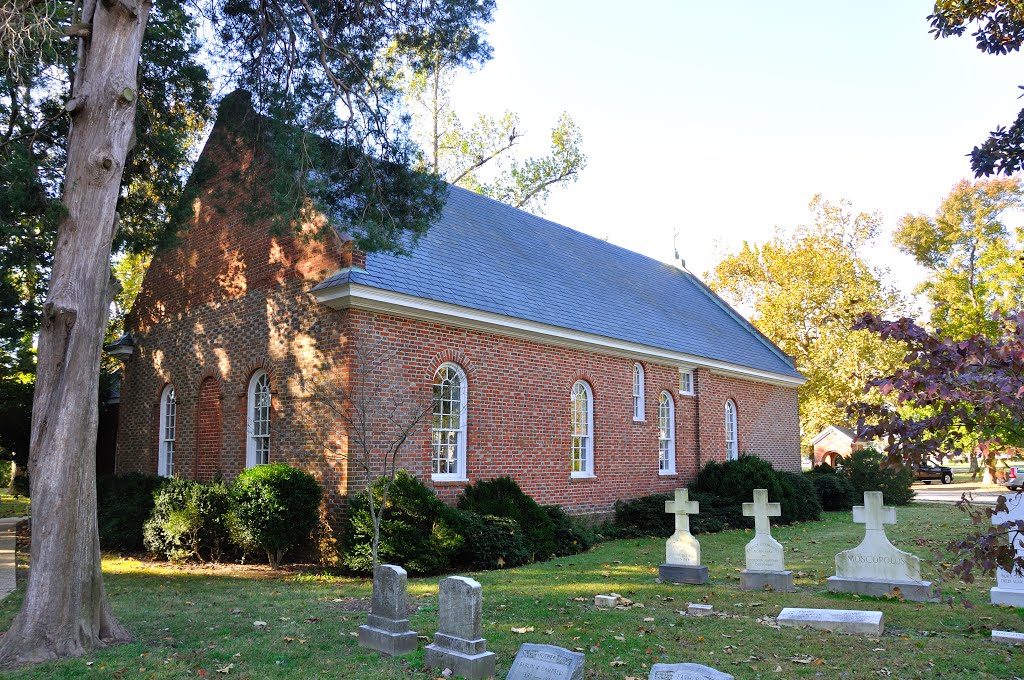 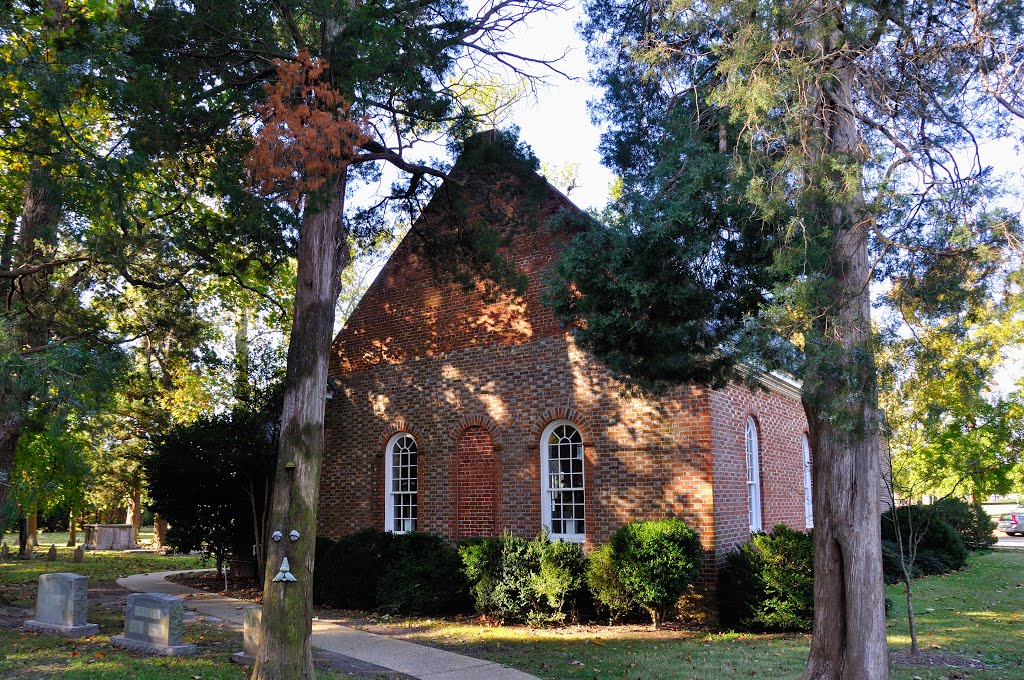 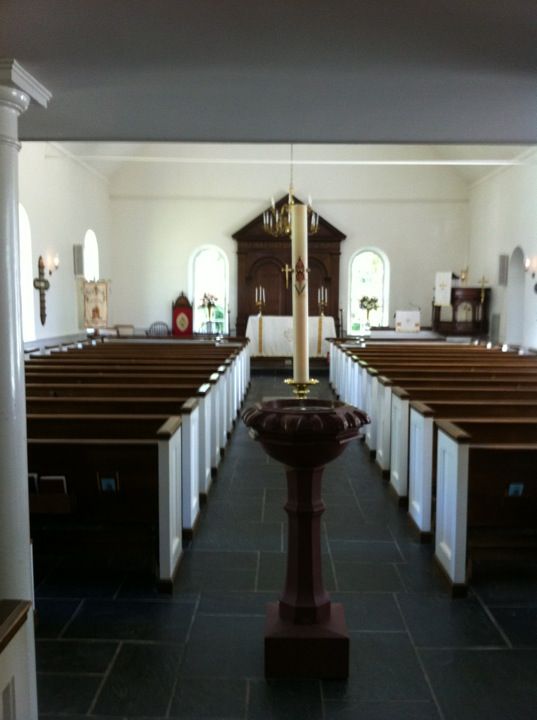 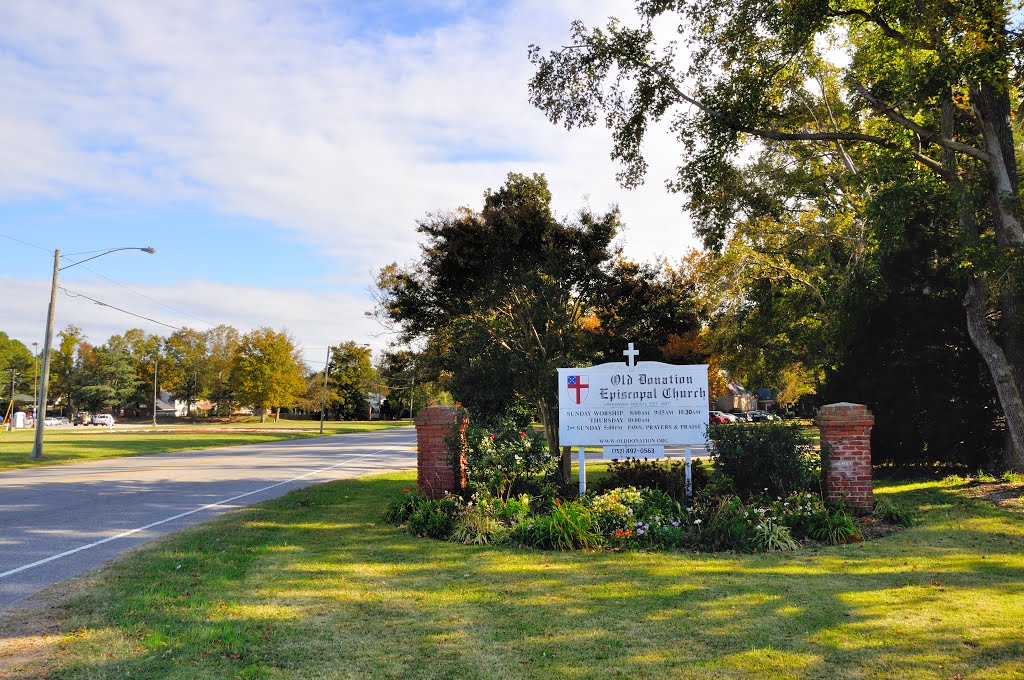 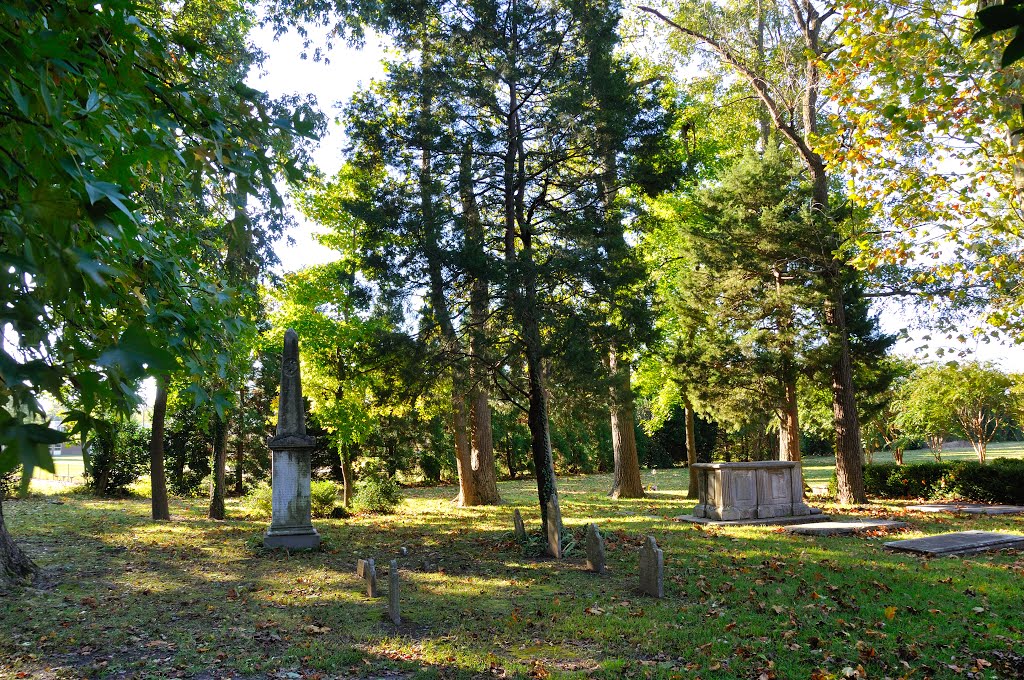 This picture was taken sometime before the church was rebuilt and is a view of the north front corner. 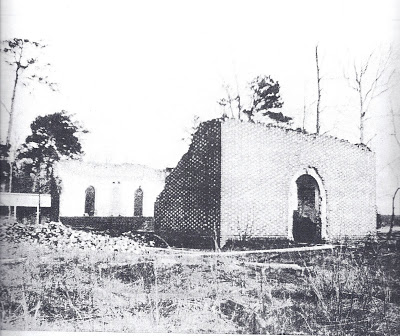 The Old Donation Church is the third Lynnhaven Parish Church, and is the oldest church in Virginia Beach. It was accepted by the vestry on June 25, 1736.

According to the Old Donation Episcopal Church homepage, the first Lynnhaven Parish Church was established in 1640 in Lower Norfolk County. The parish draws its name from the river, supposedly named by Adam Thoroughgood for his early home at Lynn, England. By 1691 the church building had begun to deteriorate, and the land around the church was slowly being eroded by the Lynnhaven River.  The vestry approved the building of a new church on two acres of land purchased from Ebenezer Taylor.  The second Lynnhaven Parish Church was completed in 1692.

As the Lynnhaven Parish grew the second church was no longer able to meet the needs of the larger congregation.  In 1773 the vestry ordered the building of a new church that could accommodate the parish’s needs.  The third church, Old Donation as we now know it, was completed  in 1736.  Not long after the church was constructed, the first of the private galleries was purchased and built on the north wall by Captain William Robinson. Thirty years later Captain James Kempe had a gallery built for his family also on the same wall. The two galleries which hung on the south wall were built before 1769. These hanging pews were paid for by Walter Lyon and Thurmer Hoggard.  A vestry order dated July 10, 1736, tells of six great pews which occupied the body of the church and a seventh on the north side of the communion table.  In 1767 Colonel Edward Hack Moseley Jr. built a “great pew” on the south side of the communion table.  As in the Bruton Parish church in Williamsburg, it was the colonial custom at Old Donation to segregate the sexes during Divine Worship. Ideally the men were seated on the north and the women on the south if this could be arranged.

The War of Independence shaped the history of Old Donation. After the Revolutionary War (1783) the Protestant Episcopal Church of the U.S. took the place of the Church of England. With the British government no longer welding its Anglican authority over Americans, the church lost its tithing tax and the practice of younger sons entering the ministry or purchasing a commission in the army or navy. Without the protection of English church laws, new denominations drew people away from the Episcopal Church, and since there were no longer any bishops in the colonies to fight for the church, Princess Anne County confiscated some of the county's oldest historical Episcopal Church properties after the church membership had faded away.

As with the first Lynnhaven Parish, the Lynnhaven River would again play a part in the fate of another Lynnhaven Parish.  Princess Anne’s population center gradually shifted to Kempsville on the banks of the Elizabeth River, a far superior channel over the silting up Lynnhaven. By 1856 Emmanuel Church had drawn away the remainder of the Old Donation’s Church congregants, and the Old Donation Vestry held their last meeting in March 1856.

Not long after the doors were closed, the Commonwealth of Virginia passed a law that churches and chapels formerly owned by the Church of England and not used within a calendar year reverted to the ownership of the Commonwealth. There was so much love for the abandoned old church that different folks from the Emmanuel Church made annual pilgrimages to Old Donation to hold services.

Despite the locals affinity for Old Donation the church fell into a state of disrepair, and in 1882 was heavily damaged by a woods fire.  In 1911, a fund raising effort led by Rev. Richard Alfriend and Judge B.D. was kicked off to rebuild Old Donation. Construction began in 1912.  Old Donation received the reredos, altar, pulpit, lectern and communion rail and possibly the flagstones in the center aisle from St. Paul’s Church, in Norfolk, when it was restored in 1913. Restoration was completed in 1916, and the churches bell tower was erected in 1923.  Old Donation underwent major repairs in the 1960’s to ensure the building’s structural integrity.  It was during this time that the slate floors were installed.  These renovations were completed in 1966.

From an architectural perspective, the church’s historian stated that the Old Donation Church is a good example of colonial ecclesiastical architecture which combined elements of the first crude shelters in Jamestown with Early Georgian style. According to Virginia Historic Landmarks Commission, the Old Donation Church is a brick, one-story structure with gable roof, a vestibule addition on its west front and a small brick ell addition at the southeast corner.  The four-bay north front consists largely of later brick as is the masonry above the eaves line on the west front, portions of the easternmost extremity of the three-bay south front and all of the water table brick.  The masonry is laid in Flemish bond above the beveled water table and English bond below.  Ornamental brick detailing includes glazed header pattern and glazed Queen closers as well as what appears to be part of a diaperwork pattern, the center portion being obscured by the vestibule, marked by twin glazed headers on the west front.  The six original round headed arches of the window openings are laid with stretchers alternating with double headers, the outside one in each case being glazed.  One of the three original chancel (east) windows has been blocked up. The gable ends are capped by a parapet wall.  Set into the original brickwork on the south front near the eaves line are small openings, one being rectangular and the other having a round-headed arch.  These windows were added to light the four “hanging pews or private galleries” placed in the church between 1736 and 1769.  Two similar openings exist on the north front, and although set into the later brick, were probably copied after original windows on that wall.