This is a contributing entry for Mapping Latino Caribbean North New Jersey and only appears as part of that tour.Learn More.

La Catrina, located at 144 Easton Avenue, New Brunswick, New Jersey, embodies a successful blend of the two cultures. Eating Mexican food, listening to the reggaeton and salsa playing in the background, and conversing with the owner gives you a feel of Mexican culture. Likewise, the internal decorations depict the cultural significance of the Day of the Dead. At the same time, the restaurant competes against others in an ever intense market in search of accomplishing its American Dream while catering to a U.S. market. Nevertheless, La Catrina demonstrates that although its location constitutes a diasporic identity, its culture represents a transnational one. 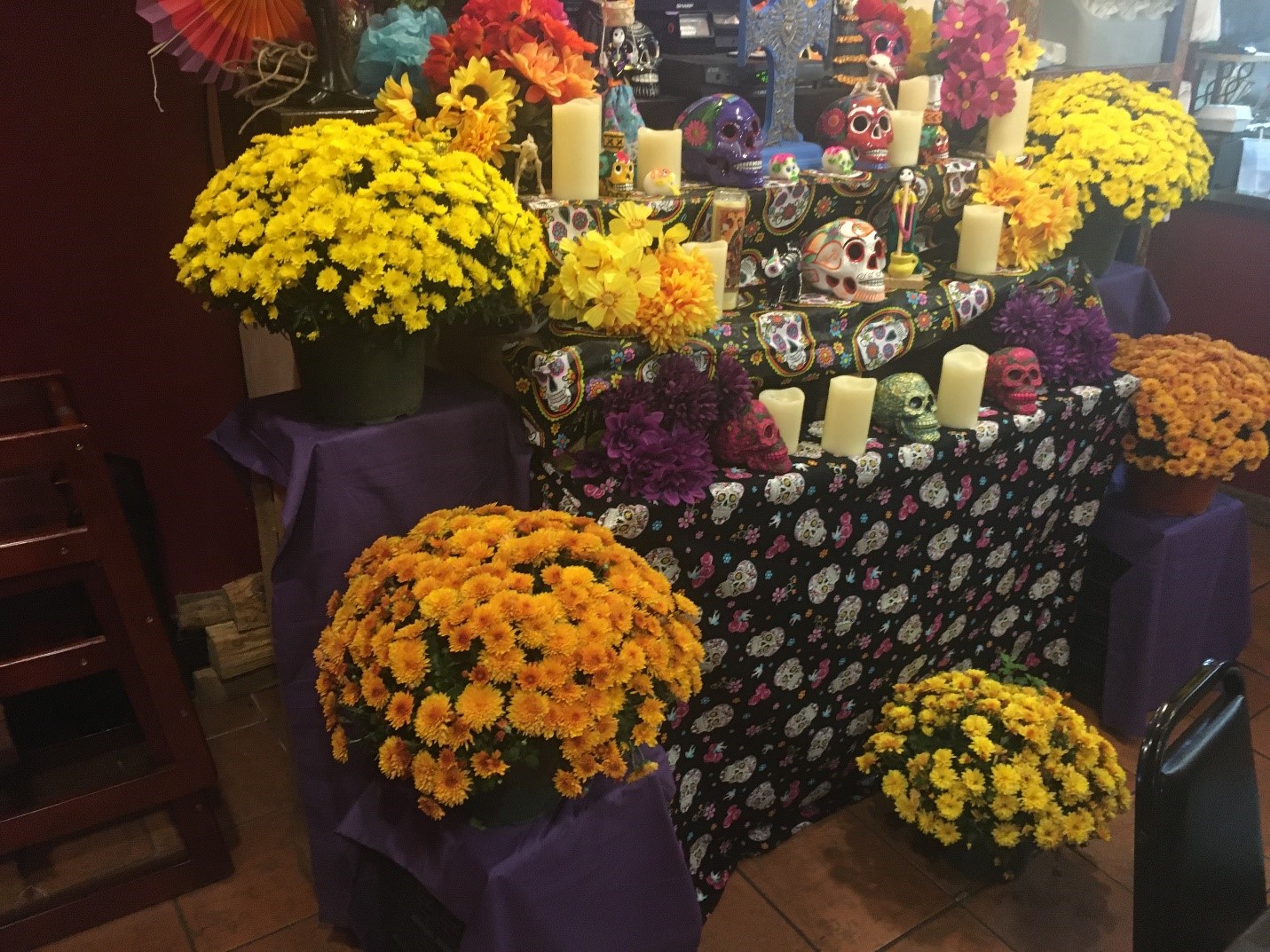 Image of the Inside of La Catrina 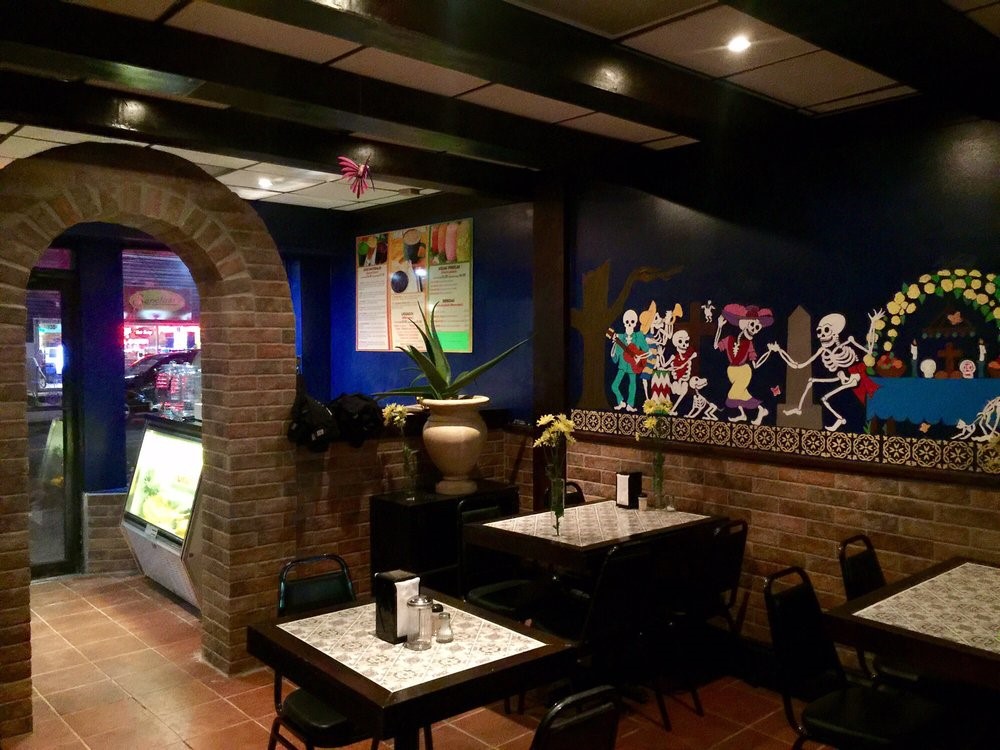 Mexican Americans struggle with an identity crisis. They are often deemed too Americanized to be Mexican, and at the same time, they struggle to be accepted by American Culture. However, this ambiguity in identity allows exploration of both cultures. Eventually, Mexican Americans created their own communities where they can promote their own culture. One of the largest communities in New Jersey is in New Brunswick, and La Catrina, a local Mexican American restaurant, helps in preserving and promoting the ambiguous culture.

While growing up, Mexican Americans were disconnected from their Mexican heritage and sought assimilation as a way to conform to U.S. standards. However, as social mobility occurred and the new generation of Mexican Americans moved into new neighborhoods, a curiosity to learn more about traditional Hispanic culture arose. The new generation of Mexican Americans, called Chicanos, wanted to challenge the way in which the United States viewed their culture. In order to do so, they promoted the Day of the Dead. They became immersed in the artwork and proudly displayed skeletons for all to see. Like the Chicano artists, La Catrina’s artwork of skeletons helps to further clash against traditional American culture. It reminds those sitting in the restaurant of the hardships faced by many in feeling accepted by a culture.

The Day of the Dead is celebrated in Mexico is to give respect to elders. Rather than mourning the death of loved ones, in Mexican culture, their lives and legacies are celebrated. When artist Jose Guadalupe Posada created the artwork La Catrina, it reminded Mexicans to stay connected with their roots. During the time of colonization, many felt the need to assimilate into European culture. However, Posada made La Catrina in an effort to exemplify everyone will end up in the same position – dead. Posada’s La Catrina was drawn in a satirical fashion and wore European clothing in order to represent the desire Mexicans felt to be in the same position as Europeans, which may only be possible in death. In the case of La Catrina in present-day New Brunswick, the skeletons in the restaurant symbolize the represent the legacies left behind by other Mexican American businesses in the New Brunswick area. Even for those that may have failed, it is most important to learn from their positives and negatives. In the case of the flamboyant costumes worn by the skeletons, those may represent the desire to change recipes and please the American pallet. However, changing the dishes then diminishes La Catrina’s Mexican American identity. Ultimately, by remaining authentic, it is possible to leave a legacy to the next generation of Mexican American businesses.

At first, New Brunswick was a predominantly ethnically homogeneous group with very few people of Latino origin. However, Latinos are the fastest-growing population in the New Brunswick area, today. Particularly, among the Latino group, Mexicans are the most prominent in today’s culture accounting for more than a quarter of New Brunswick’s total population. Through migration to New Brunswick, the traditional Mexican culture was introduced. A place like La Catrina, which is named after satirical skeleton drawings during the Day of the Dead, promotes Mexican culture in New Brunswick. Still, a potential challenge of gentrification in New Brunswick is occurring. Due to the rising prices of rent and the influx of large businesses, there is a concern that a small restaurant such as La Catrina may struggle. This is even apparent in La Catrina's recently increased prices. Nevertheless, a strong tight-knit Mexican community in New Brunswick may be the wildcard that helps small Mexican businesses like La Catrina to prevail.

La Catrina is important to history as it represents the future. Many communities are becoming ethnically diverse due to globalization and La Catrina demonstrates that boundaries created between the diaspora and the home country can be broken. A transnational identity is possible to achieve.