Amos Todd and Joseph Beebe (Amos' brother-in-law) were the first pioneer settlers of Cortland County. In 1791, this lot, purchased from a land agent, was the first farm in the county. This marker is backed by a view of only a small piece of land that was collectively owned by Todd and his family. 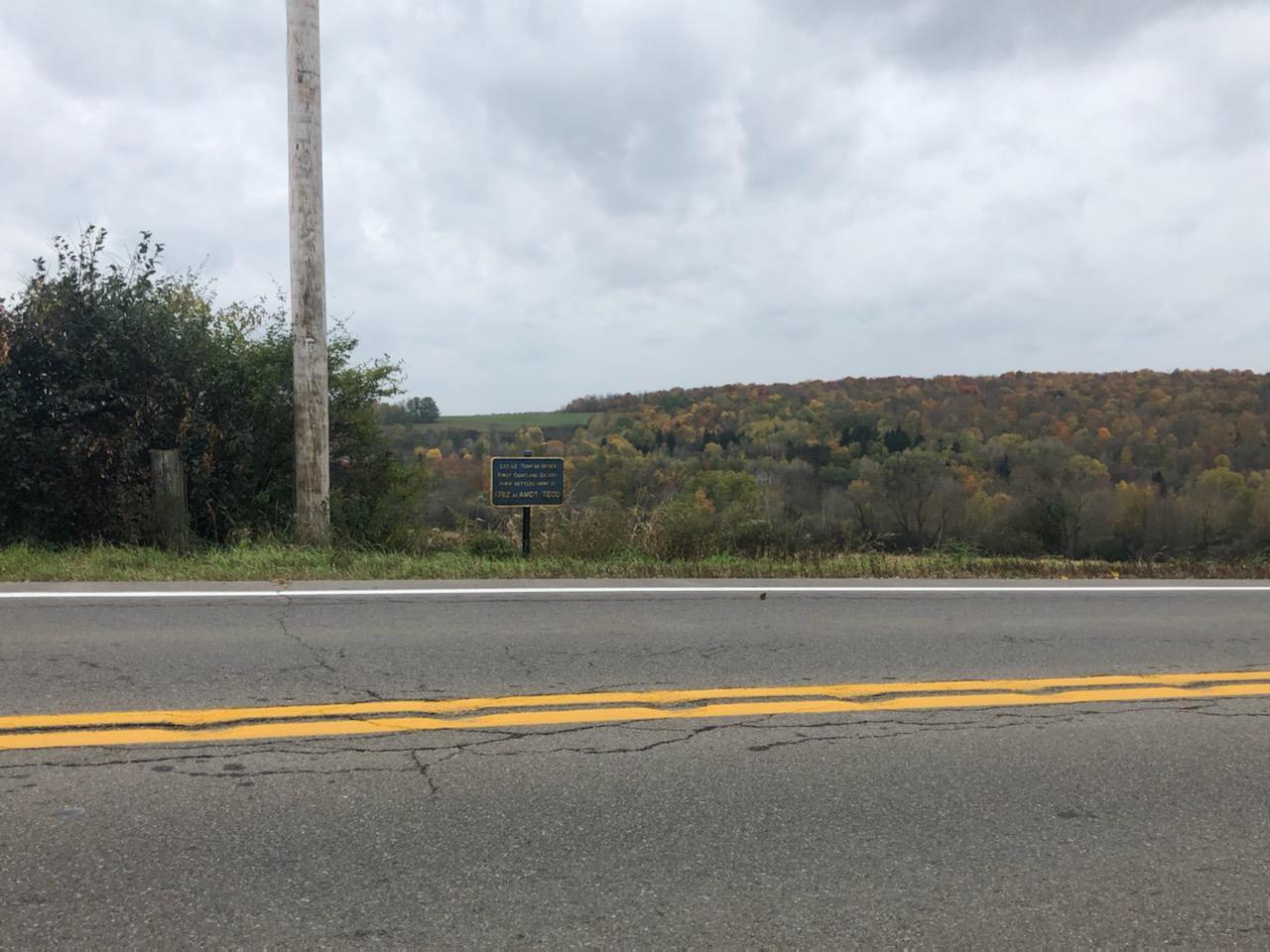 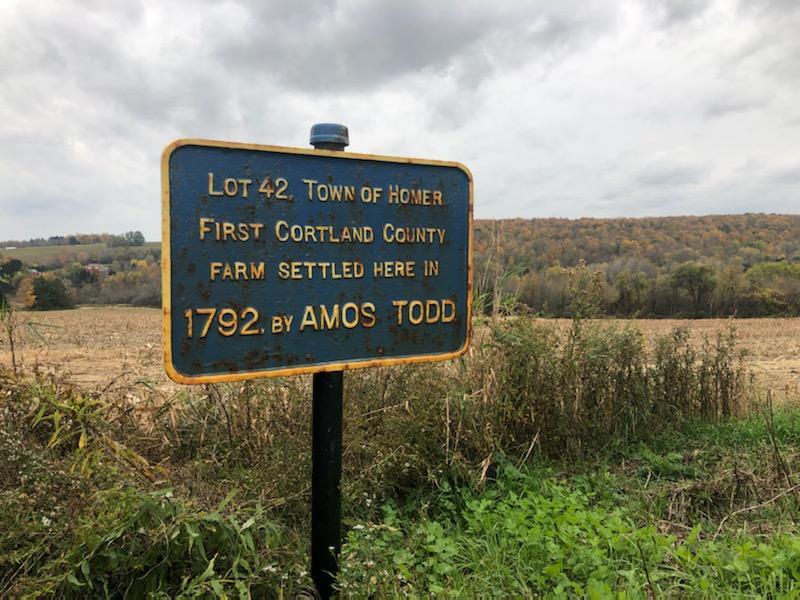 Amos Todd was born on November 15th, either in 1769 or 1770 in New Haven Connecticut. He was the son of Charles Todd (a descendant of the family that came to the Americas from England in 1637) and Lydia Peck Todd. Before getting married to Lurana Strong--the daughter of Ozias Strong and Susannah West Strong-- he lived in Great Bend, Pennsylvania after moving out of Connecticut.

Revolutionary War soldiers were assigned lots in New York as a form of payment for their services in the military. The soldiers had the ability to sell off their allotment if they decided they didn't want it. Lot 42 in particular was originally drawn up by a man named Isaac Foot. He never ended up claiming his allotment, and he then sold it off to David Hotchkiss (Joseph Beebe's stepfather) who owned the land until September 22nd, 1800 when he sold 238 acres of land to Amos Todd for $65, 238 acres of the land to Dan Todd (Amos' brother), and 97¾ of it to Rhoda Todd (Amos' sister and wife of Joseph Beebe's) for $28.

When coming to the land, Amos, Rhoda and Joseph left from Windsor, NY en route for Binghamton, NY in 1770. After reaching Binghamton to gain some supplies, the Amos Todd and his party traveled up the Tioughnioga River valley with oxen in order to reach their newly acclaimed lot in the fall of 1771. Upon reaching the site, Amos and Joseph created 12'x15' pole cabin. But while putting together the cabin, the party lost their oxen, but eventually got them back within three days. After finishing this cabin, Amos and Rhoda's husband had to leave for Binghamton to get more supplies to last them through the winter. They left Rhoda alone on the lot for about 6 weeks before returning.

After establishing a stable settlement, Amos Todd married Lurana Strong and then proceeded to have 11 children from the years 1795-1824. Their daughter Lydia, who was born in 1800, died in 1823. Their son Jason, who was born in 1806, also died before Amos did. After Amos' death on October 3rd, 1830 (buried at the Glenwood Cemetery in Homer, NY) his wife and children moved to Ohio while his departed children were buried on the lot. The property was then owned by George Todd (the son of Amos' brother, Dan Todd) before being sold to someone else as he moved to Iowa in 1869. This next owner moved the tombstones that were on the land to his cellar steps on the lot in order to make more room to plant grain on. A while after doing this, the owner was found to have been murdered with a butter ladle that was left behind by George Todd in a box.

Before Amos's death in 1830, he and his family were well respected in their area. Amos was a founder of the First Religious Society (1796) and the First Congregational Church (1801). He became one of two of the Commissioners for Highways for the Town of Homer in 1797. On April 14th, 1819 he gave out a deed for a schoolhouse to be erected near his home in Homer.

As of 1958, the property was owned by a Jerry Sweeney. In October of that year, this historical marker was erected by Mrs. Grace Todd Terrell Birdsall from Fort Dodge, Iowa. She was the great granddaughter of Dan Todd.

While in the Cortland County Historical Society, I searched through different folders relating to the site. At one point I found an article titled "Their Combined Age 343 Years." Then I also found another source coming from the Sunday Post Standard. Finally I had also found, in a folder titled "Historical Markers," a text called "Historic Markers in Cortland County as Listed by the State Recorder of Public Records--February, 1949." The Articles and Book sources were all found in the "Todd" folder owned by the Cortland County Historical Society.