The Parris Island Museum serves as the historical exploration of not only the United States Marine Corp, but for the entire Port Royal area near the Marine Recruitment Depot in Parris Island, South Carolina. Though located near the famous east coast training depot, the museum also covers the early history of the Port Royal and Beaufort areas Native American, French, and Spanish colonies from the 1500-1700s. The museum covers the rich military history of the Island ranging from the Revolutionary War, installation as a Marine Depot following the conclusion of the Spanish-American War, and through the present day. Since the museum is located on the base, visitors must gain permission at the gates of the Depot before being allowed to visit the museum.

Exterrior photo of the Parris Island Museum so guests may be able to identify it while on base. 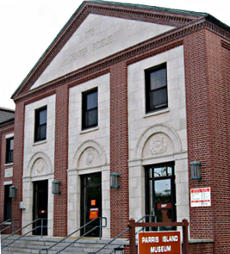 Location of the Parris Island area in the state of South Carolina. 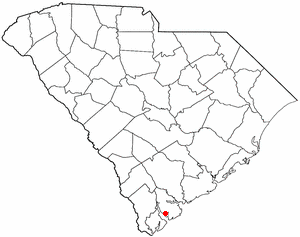 The first Marines to arrive to Parris Island in November 1861 to secure the area as a base for the Union Navy during the Civil War under Captain Samuel F. Du Pont. Roughly twenty-one years later, a contingent of naval officers selected the area as the site of a coaling dock and naval storehouse with the first recognition of being a Marine outpost coming nine years afterwards. It was not until 1909 that the barracks on the island became the Marine Officers' School before being relocated to Norfolk, Virginia, so the island could be used as for disciplinary needs. In October 1915, Port Royal saw the return of the recruiting depot with the Navy giving the buildings and land to the Marine Corps to begin training their new recruits.

Due to the overwhelming number of soldiers demanded to travel to the frontlines of World War I, the depot revamped the training regiment recruits endured, the number of recruits taken grew, and expansion occurred. Recruitment numbers fell during the Great Depression of the 1930s before becoming overwhelmingly large after the bombing of Pearl Harbor and beginning of U.S. involvement in World War II in late 1941. After the passage of the Women's Armed Services Integration Act of 1948, the base began training the first set of women's recruits followed by African-American recruits being welcomed to the depot in 1949.

During the training periods in the years of the Vietnam War, the length of recruits' training lowered from the usual twelve week program to ten weeks in order to avoid adding more platoons as over 200,000 enlisted to become Marines. The current structure of the training was implemented in 1996 that included values-based training, the introduction of the infamous fifty-four-hour culminating mission known as the Crucible, and the reintroduction of a twelve-week training period for both male and female Marine recruits. Through the storied history of the Corps and the Depot, it is easy to understand why the Marines are one of, if not, the highest regarded branches of military service.

The public is welcome to visit the museum, whether they are just wanting to see the museum itself or have traveled to see their family member graduate from Parris Island. If arriving on a family or graduation day, guests will experience some delays as the base will be crowded over the two days of events. After leaving the museum, guests will have a new found respect for not only the Marines who call the area home for however long their training may last, but for the citizens of the town who hold a tradition and legacy of bravery and progress that benefits the nation to this day.