This historic Akron home was designed by the New York architecture firm of Alexander Trowbridge and Fredrick Ackerman and constructed in 1917 for local businessman Stacy G. Carkhuff. Carkhuff was the secretary of the Firestone Tire and Rubber Company from 1905 to 1943. The two-story house was modeled in Georgian Revival Style and features detailed brickwork, high interior ceilings, and large windows. The house acted as Carkhuff's home until his death in 1945. His family donated the house to the Firestone Foundation to act as their offices. Since then, the house has served as archives, a law firm, and as the offices of the Sovereign Chemical Company. The building was listed for sale in 2017 and was still on the market at the end of 2019.

The Carkhuff House as it stands today. 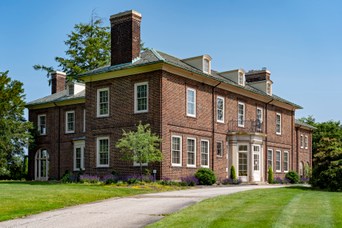 The Stacy Carkhuff house was constructed in 1917 by the New York architecture firm of Alexander Trowbridge and Fredrick Ackerman. The two-story 17 room house is an example of the Georgian Revival style, with its use of brickwork to create a rich detailing. High ceilings and large windows characterize the interior of the house. The house also features a service wing for the servants of the house. The walls initially featured paneled walnut woodwork, while the floor was constructed with a varnished oak.

The building was the home of Stacy G. Carkhuff, Carkhuff was a highly respected secretary of Firestone Tire and Rubber Company. He had worked at the Firestone Company from 1905 to 1943, becoming associated with the company shortly after its inception. Carkhuff had made a name in Akron by being an industrialist who promoted and controlled this leading Akron industry.