The Old Town of Flushing Burial Ground, also known as Martin's Field, began in 1840 as a resting place for people who died of epidemic diseases. Over the years, the cemetery was used largely for the burial of African Americans and Native Americans, as well as the victims of several epidemics. It's estimated that roughly 1,000 people are buried in the cemetery, although many of the tombstones were destroyed in the 1930s. The cemetery is listed on the National Register of Historic Places as well as the New York State Register of Historic Places.

Entrance to the burial ground 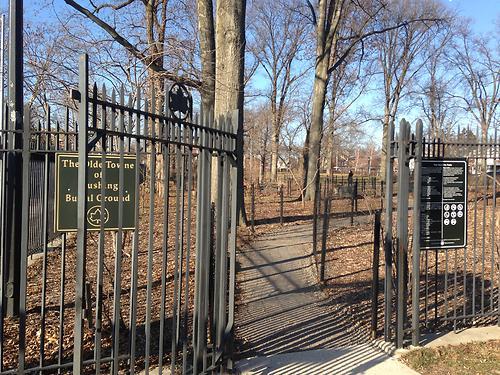 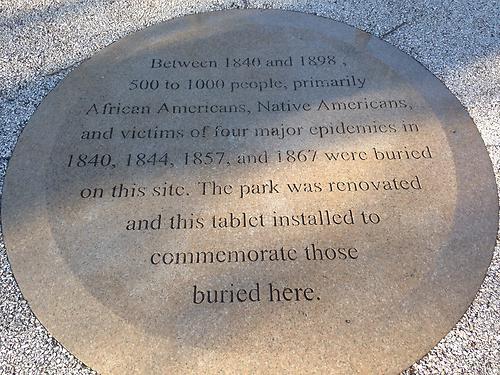 Inside the burial ground 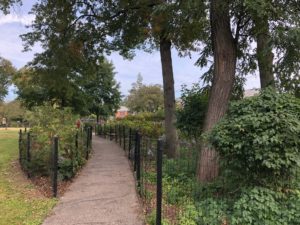 The town of Flushing purchased the land in 1840 to serve as a burial ground for residents who died of epidemics. Outbreaks of contagious diseases, such as cholera and tuberculosis, were common and burying the victims at a safe remove from residents was important to ensure public health. The town faced epidemics of cholera and smallpox in 1840, 1844, 1857, and 1867.

Over the years, the cemetery came to be used not only for the burial of victims of epidemics but for African Americans, Native Americans, and poor whites. The graves were arranged haphazardly and some of those interred there were buried only a few inches beneath the ground's surface. The last burial in the cemetery took place in 1898, when the City of New York was consolidated and the government of Flushing was abolished.

The Parks Department acquired the burial ground in 1914, and for a number of years afterward, it was used as a park. In the 1930s, Parks Commissioner Robert Moses used part of the burial ground for a modern playground, which was built by the Works Progress Administration. During the construction of the playground, workers uncovered numerous graves as well as many old-fashioned burial traditions, such as placing pennies over the eyes of the dead. It was during the 1930s that newly paved-over portion of the burial ground became known as Martin's Field, in honor of conservationist Everett Martin.

Starting in the 1980s, Mandingo Tshaka began a campaign to reclaim the cemetery and acknowledge its many graves. Tshaka's interest in the burial ground began when he discovered that members of his own church, Macedonia African Methodist Episcopal Church, were buried there. The city used ground penetrating radar to survey the site and found that there were many unmarked graves. In 2006, the park built under Robert Moses was relocated and a plaque was placed in the center of the site, acknowledging its long history as a cemetery. The burial ground was added to the National Register of Historic Places in 2018.

In 2018, city officials announced plans for a plaza at the site which would honor the memory of those buried there. The project, which is expected to be complete in 2021, will include a wall with the names of more than 300 people that officials have confirmed are interred there.

Historians believe there are hundreds--perhaps as many as a thousand--buried in the cemetery, many of which are young children. The overwhelming majority are unknown, with the exception of a few whose tombstones were still standing during the excavation of the 1930s. Their names are included on the plaque.