The Chatham Kent Black Historical Society, also referred to as CKBHS, is a non-profit museum. Dedicated to showcasing the local history found in the municipality of Chatham- Kent, the museum frames the story around their African Americans population and past Abolition efforts. The museum opened in 1994. However, the site contains artifacts as well as family history and lineage tracing back to the community’s origins in the late seventeen hundreds. The museum focuses on providing the regional significance of the members of the community who shaped the area and developed the town, but also Chatham's impact on a broader national landscape. Chatham was a prominent center for abolitionists and the anti-slave movement creating close relations with national and international organizations, but for this entry, specifically focusing on Oberlin College, Ohio. As a result of the connection of abolition bonding these two cities together, Chatham became a flourishing society providing a close refuge for runaway slaves and a centralized location for abolitionists ideas in Canada. The museum remembers and commemorates notable African Americans throughout the centuries of Chatham's history who have demonstrated exemplary actions locally or globally. To name a few of the well-known abolitionist who had connections with Chatham and Oberlin include Mary Shaded Cary and John Brown. However, their family members, as well as radical community members, are also acknowledged for their commendable efforts.

The image is of the WISH Centre, a multipurpose community space, which is also the central location for The Chatham-Kent Black Historical Society. It is in this building where the museum's collection is displayed. The WISH Centre also marks the official landmark location-point for this project on the CKBHS.

The image is of the CKBHS's collection of binders that hold family histories of Chatham locals. The museum has dedicated years to creating a thorough and comprehensive collection that shares the stories of the community members past and present.

Depicted in both images in the Freedom Park historical landmark is Mary Shadd. The park was the original site for the BME Church, a gathering place for abolitionists, including Shadd. Her message for the movement, as inscribed on the placard, was to “improve the quality of life for everyone.”

The image depicts the proximity between Canada (right) and America (left). The lack of distance allowed for abolitionists to connect and create a route of travel from Oberlin to Chatham for escaping African Americans seeking refuge.

This image is an artist's representation of Oberlin being the last stop on the Underground Railway. Oberlin accepted runaway slaves and was a final stop for freedom unless news of slave catchers spread, and they needed to continue to Chatham. 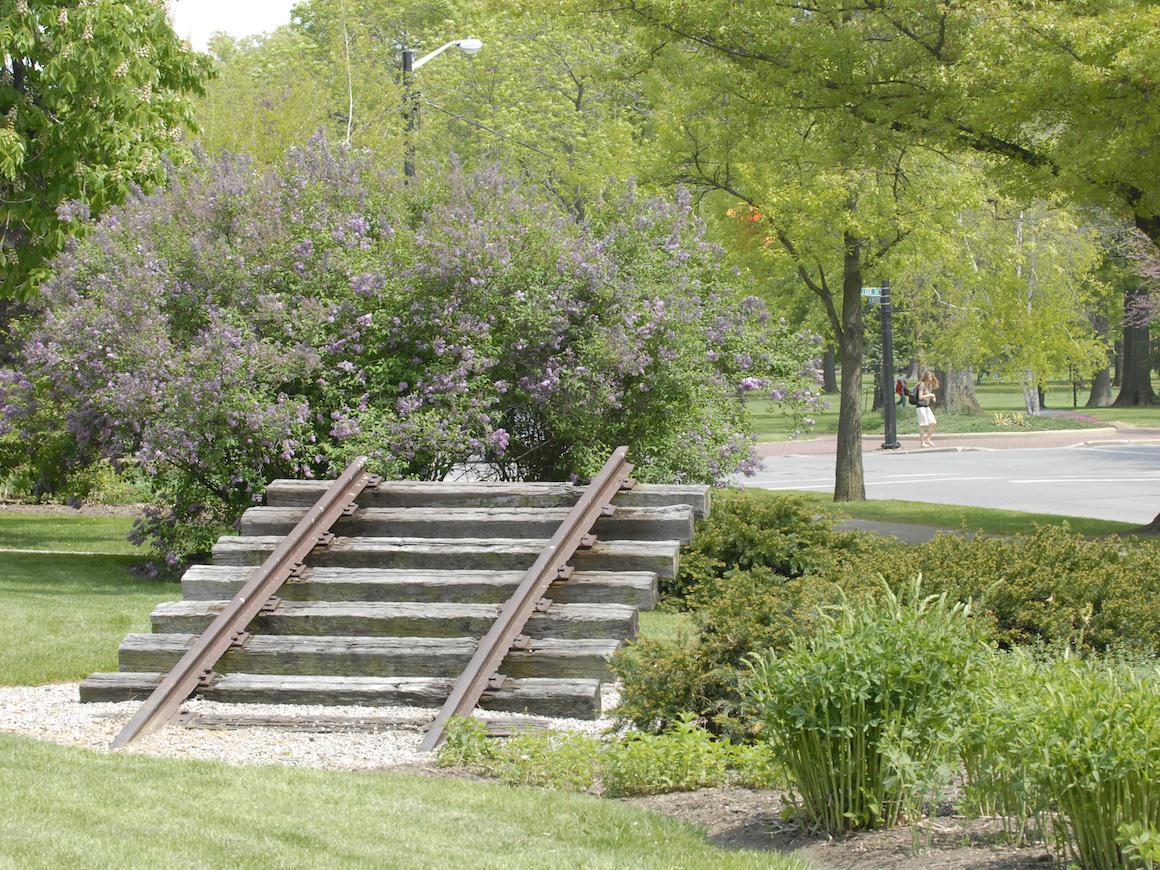 This is an image of the known routes people travelled to get to freedom. These routes often changed and varied to remain secret. Regardless, the paths would have people gather in Ohio, specifically Oberlin, while other lines show the trip into Canada.

The municipality of Chatham-Kent began in the 1790s but transformed into a town known for abolition in the mid-nineteenth century.[1] The change occurred from political development in America. The federal government passed the Fugitive Slave Law one year prior. This law made it legal for slave catchers to recover escaped slaves and free Blacks. This resulted in well known Abolitionists from all around America, including Oberlin Ohio, travelling to Chatham for safety. Martin Delany, Austin Stewart, William Lloyd Garrison, Josiah Henson, Osborne Anderson, Mary Ann Hollensworth, James C. Brown, Frederick Douglass, as well as Mary Ann Shadd and John Brown who will be discussed below are just a few who emigrated.[2] With the number of influential leaders together in Chatham, the town became a center for activism and Abolition in North America. A significant proportion of the new members of the community left once The Civil War ended. They had hope for change in the future, but at the same time, wanted to go back to normalcy. Post-war Canada provided unique opportunities for freedom for those who stayed. From the beginning of the emigration, Canada offered unique opportunities for freedom. The idea that Canada was not just a refuge for African Americans but also a place where they had self-autonomy to leave and construct racial equality for themselves.[3] The empowerment and progressive ideas brought to Chatham did not leave after the war; it left a lasting impression that is showcased through the CKBHS.

Mary Ann Shadd Cary was an abolitionist who embodied the qualities of a great activist and created immense positive change in the region of Chatham. While she was born in America, Shadd travelled throughout her life and spent time in both Canada and America.[4] For the confines of this project, only her travels and achievements created in Chatham and Oberlin will be mentioned. While she was not travelling and living in Chatham, Mary Shadd was significantly influential. She and her husband created a newspaper to spread their abolitionist ideas to which she was the journalist, editor, and owner. She was also a teacher and established a school for both children and adults to learn, and therefore liberate themselves.[5] The influence she made was incredible to the regions where she dedicated her time. Mary Shadd was a heroine for her massive community involvement and abolitionist tactics for more human rights and liberties. Her efforts live on in Chatham both locally and in the museum.

Within the Abolition movement, John Brown has a unique civil rights fighter. Most of the Abolition movement was non-violent in approach, but Brown decided he had enough inaction after dedicating his life to the cause. John Brown experienced a portion of his young, shareable adolescent in Oberlin, Ohio.[6] In the progressive town, Brown learned about the social movement and wanted to join. From the start, he was more radical than other members. His goal was to see imminent emancipation.[7] In Chatham, he held a conference for abolitionists. Interested members were welcome to come to listen to the ideas being stated and put in their input. This was a common practice among the abolitionists. It was held in the BME Church with many of the people who were named above, the abolitionists who travelled to Chatham to escape America's unjust laws, coming to the church to hear Brown.[8] It was only Osborne Anderson from the crowd of who joined Brown in his raid of the federal arsenal in Harper's Ferry, Virginia. It is claimed that though this protest, John Brown, despite losing his and 16 others’ lives, created one of the reasons for the Civil War.[9] John Brown was a radical trying to create equality. He was centred in Chatham for the most defining moment of his life, and his legacy continues to be shared from museums on both sides of the border.

The definition of Black intellectual history is the people who make history, those who write about it, and those who read about the events.[10] This directly relates to how the CKBHS structures its community museum. The society focuses on sharing their knowledge with the community members on a local and broader national scale but as well with the people who had family connections in the pre-war period who moved. The museum is also trying to connect the people who frequent Chatham's history with other historical narratives. The stories of Mary Ann Shadd Cary and John Brown are well known in the American context, but the information regarding their influence in Canada is considerably lower. With institutions sharing and connecting these stories, a better understanding of history and its interrelated connections is made. The reconnecting of roots and stories is a significant part of the museum's overall goal. They do not want to see their involvement in history to be dismissed and forgotten, but for as long as the museum is functioning, that should not be a problem.

[2] Hepburn, Sharon A. Roger. "The Promised Land: History and Historiography of the Black Experience in Chatham-Kent's Settlements and Beyond, Edited by Boulou Ebanda De             B'Béri, Nina Reid-Maroney, and Handel Kashope Wright." University of Toronto Quarterly 85 no. 3 (2016): 27

Hepburn, Sharon A. Roger. "The Promised Land: History and Historiography of the Black          Experience in Chatham-Kent's Settlements and Beyond, Edited by Boulou Ebanda De B'Béri, Nina Reid-Maroney, and Handel Kashope Wright." University of Toronto      Quarterly 85 no. 3 (2016)

Walcott, Rinaldo. “Who Is She and What Is She to You?" Mary Ann Shadd Cary and the (Im)possibility of Black/Canadian Studies. Atlantis 24 (2), 2000.