Explosion on the River Quay

The explosion on May 27, 1977 in the heart of what is today's Kansas City's River Market destroyed two bars in a lively area of Kansas City, permanently destroying the River Quay's reputation. Hiding behind the explosion is the secret history of the KC Mafia. While Kansas City’s presence of the Mafia is less prevalent than that of cities like New York and Chicago, their presence has still been pronounced in the history of Kansas City, Missouri. The River Quay was an incredibly popular area within Kansas City, originally viewed as family friendly and a great place to spend time. The infiltration of the mafia and the business they brought in slowly killed the popular area, and the explosion was the final nail in the coffin.

This is a photo of River Quay in its prime. It would get so busy that cars would line the streets, up and down. This particular photo shows Delaware Street on a busy night in July of 1974. 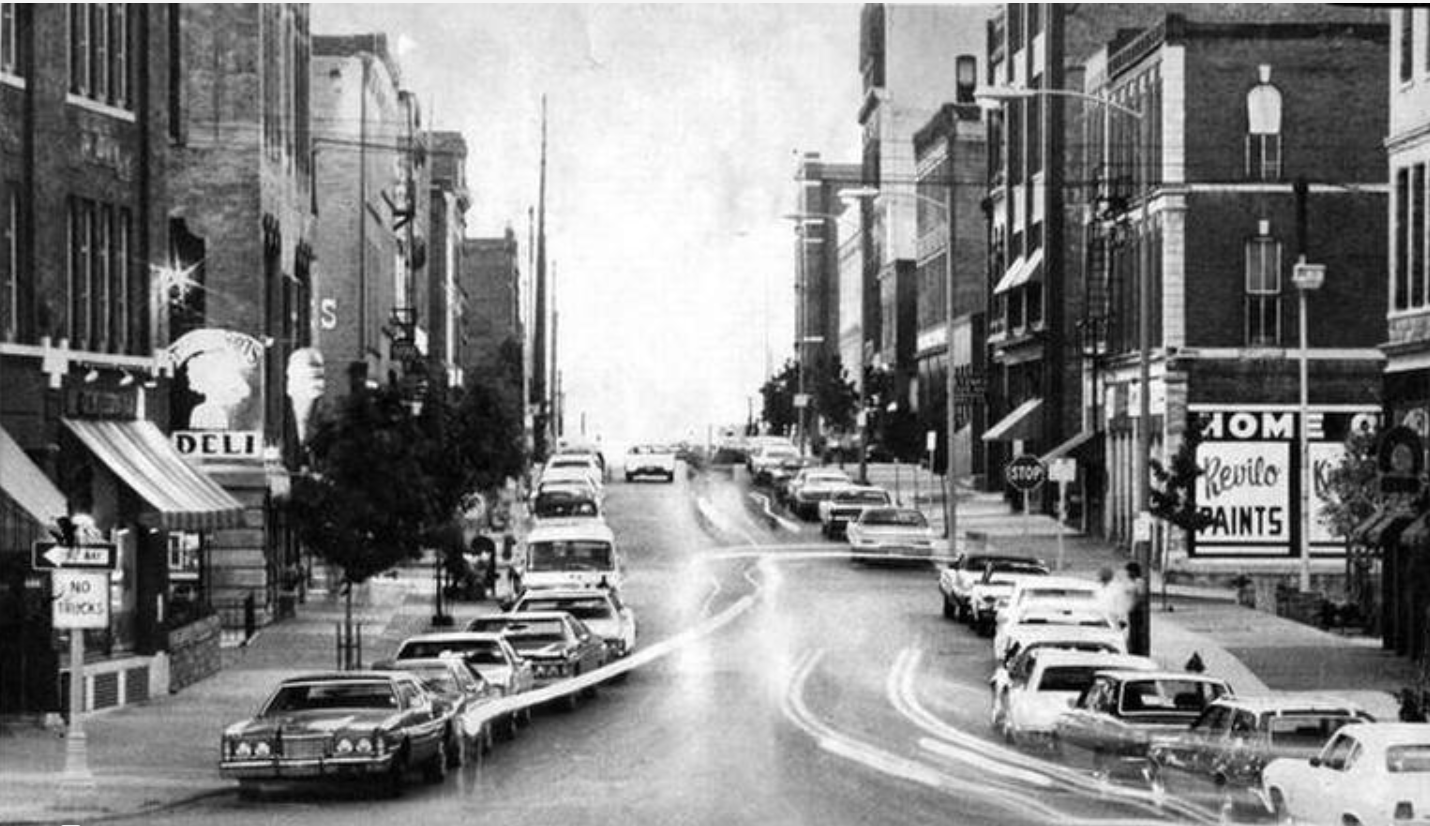 This is an old pamphlet used to promote the River Quay. The area was marketed as a popular tourist destination and was meant to help bring in people from out of KC. The pamphlet claims that there are over “100 tourist attractions”. 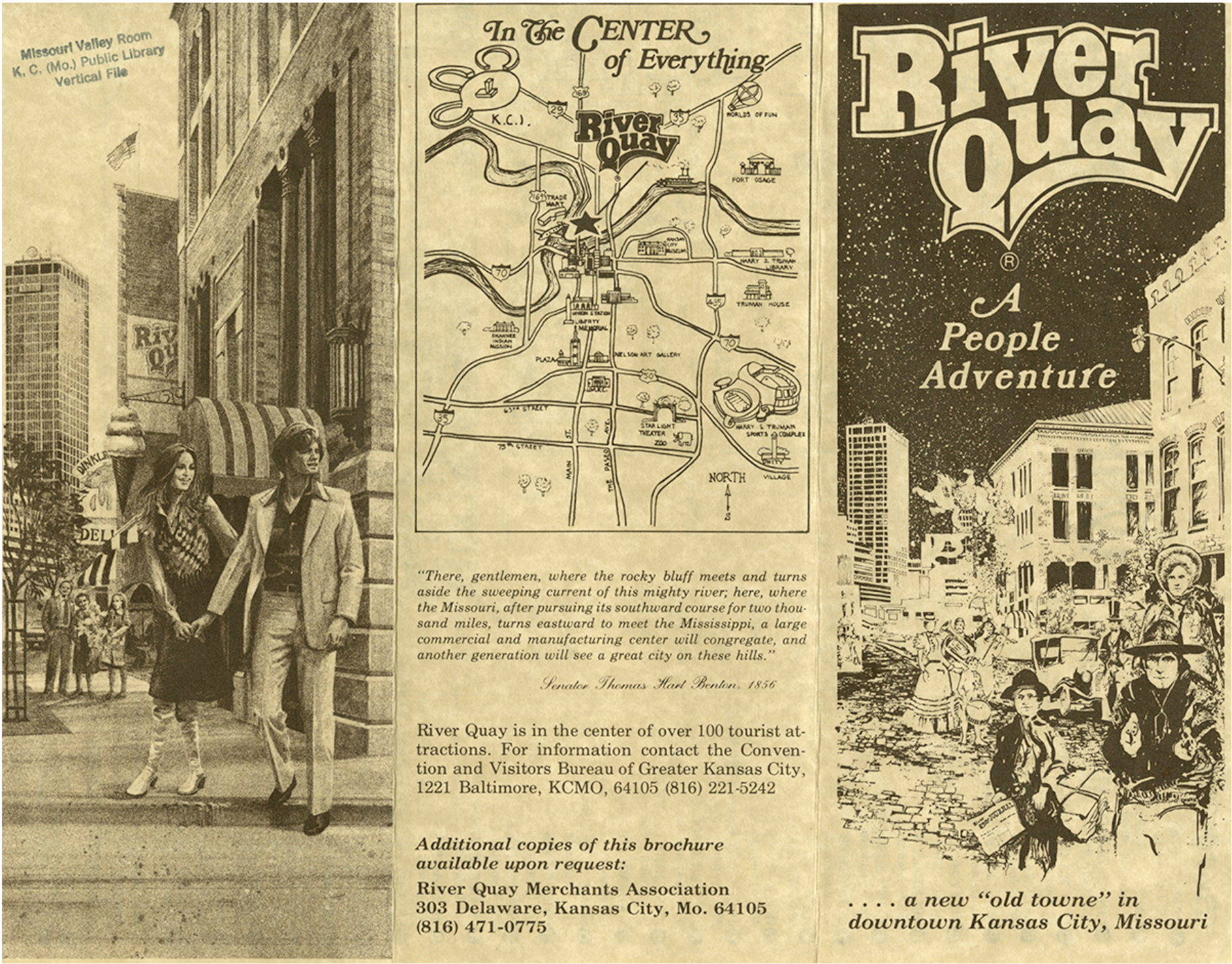 This photo depicts the destruction of the explosion. You can see above the two bars are completely destroyed and leveled—Pat O’Brien’s and Judge Roy Bean’s—in a building the Fred Harvey Bonadonna owned. This is an old clipping from The Kansas City Times. 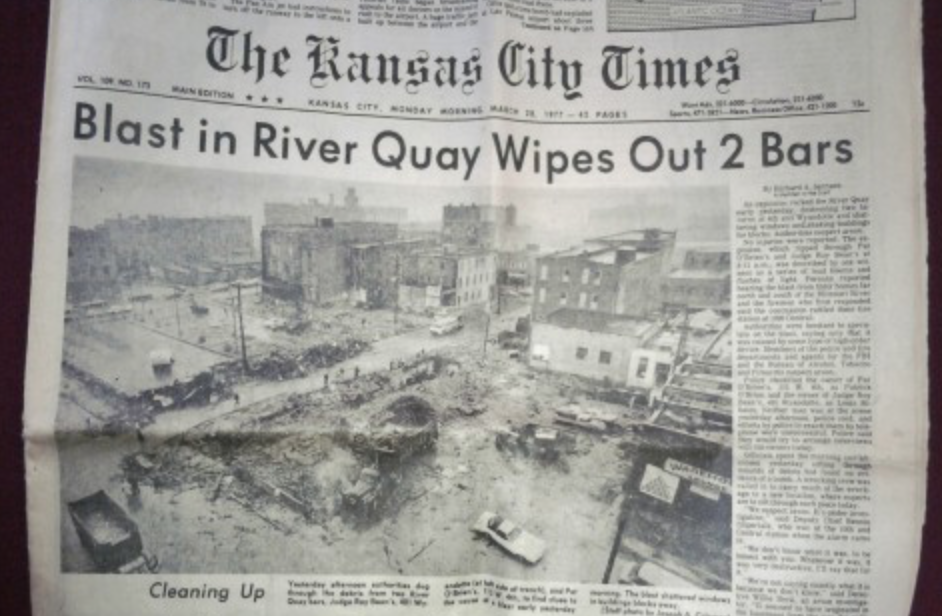 This is another picture of Delaware Street after the explosion in 1977. Here you can see the drastic difference and the consequences the violence had on the popularity of the River Quay. 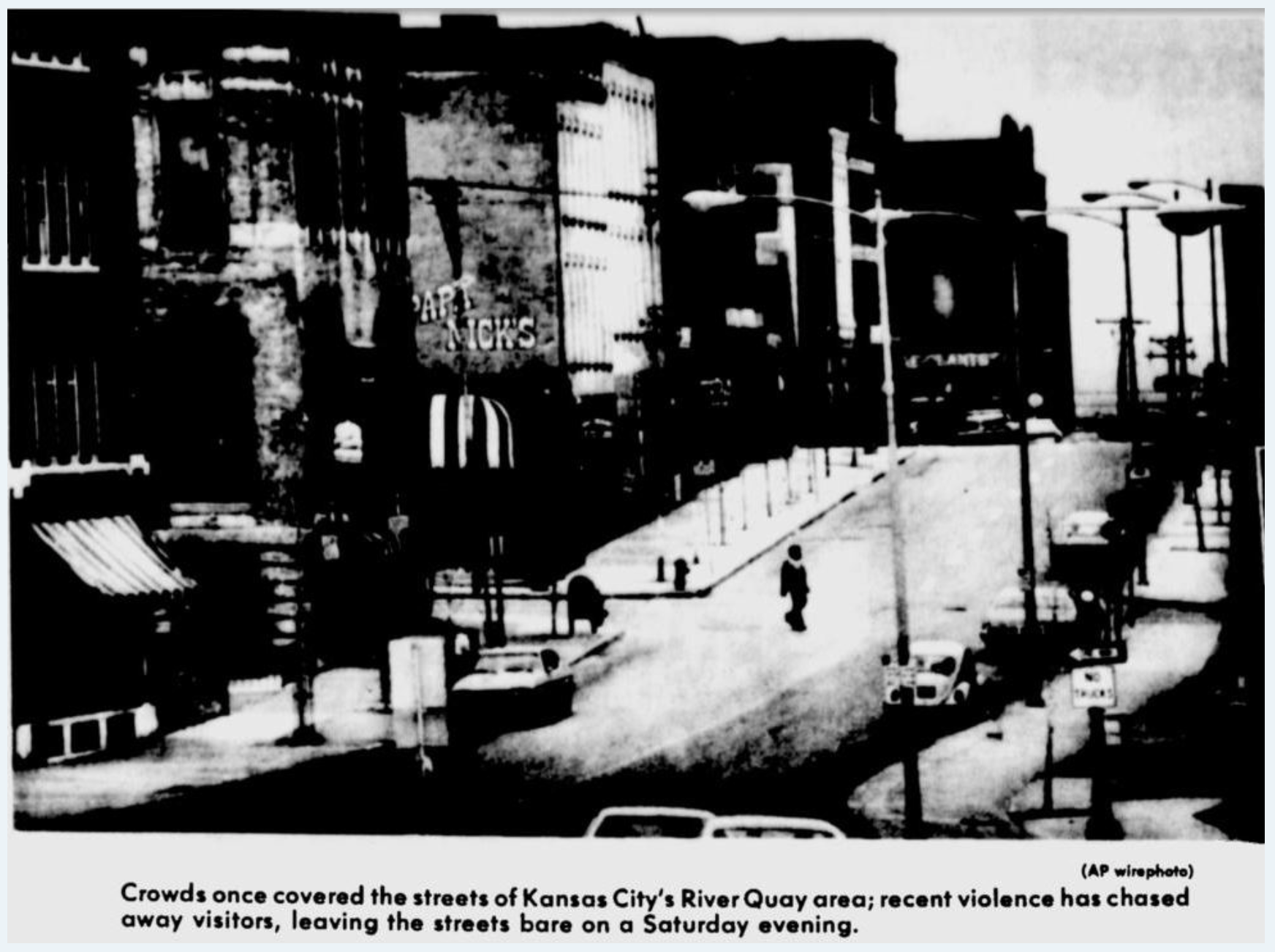 In April 1971, Marion A. Trozzolo—an Italian native who moved to Kansas City from Chicago to be a professor at Rockhurst university—launched the River Quay. He owned a plastics business that ultimately sparked his interest in the River Quay by being the first of the historic buildings he purchased in the abandoned area.  Trozzolo went on to buy 20 more properties and restored them to rent out to business owners for $2 to $3 a square foot, encouraging business owners to open up shop in the area.  This ultimately brought the River Quay to life. Trozzolo envisioned and dreamed that the River Quay area would be similar to Old Town in Chicago or the French Quarter in New Orleans.  And by the mid 1970s it seemed that the River Quay would live up to the hype, as it had grown to be home to more than 65 businesses.

As an up and coming area in Kansas City, the River Quay quickly drew attention and crowds of people. This included business owner Fred Harvey Bonadonna known as Freddy.  Although his father was a mafia associate himself, he encouraged Bonadonna to take another path.  Bonadonna opened his business “Poor Freddies”, on September 15, 1972 and it was an instant hit.  Bonadonna himself completely supported the wholesome vision of the River Quay, “devoid of loud music and also of liquor joints that did not serve food or that featured adult entertainment” (Ouesley, 2011, p. 84).

Although Bonadonna was not a mafia associate, he often crossed paths with those in the mafia. Unfortunately, Bonadonnawas a little too excited about his success, and bragged that he was making $10,000 weekly (an overstatement) to a member of the Civella family.  This is important as Nick Civella was the face of the Kansas City mafia, making the Civella family as a whole very powerful.  When this news got to Civella that investing the River Quay could be so lucrative, it sparked interest.  After this, mafia owned businesses featuring liquor and adult entertainment started to try and make their way into the River Quay.  Places like X-rated Chelsea Quay Theater, Deleware Daddy’s, three little pigs, and other mob related bars.  All the while, Bonadonna stilled believed in the wholesome vision of the district, and tried to make attempts to keep these businesses out.

One member that would particularly important in the demise of the River Quay would be Joe Cammisano and his brother Willie.  Joe Cammisano had run the “girlie joints” on the West 12th Street Strip in Kansas City, consisting of bars that featured exotic dancers and adult entertainment.  Cammisano told stories of how the River Quay used to essentially be a red light district.  He wanted to return the Quay to its former glory. Bonadonna actively resisted this; “Prospects for real conflict gained momentum when Bonadonna, unwilling to concede the Quay to the mob, geared up to secretly do a battle by blocking the issuance of [the mob’s] liquor licenses” (Ouesley, 2011, p. 95).  This made the Cammisano’s upset and placed a target on Bonadonna.  In addition to this, Bonadonna owned parking lots near the River Quay that the Cammisano’s wanted.

On July 22, 1976 Bonadonna’s father was murdered, found in the trunk of a car. Shortly before his murder, David Bonadonna warned his son that after he himself was murdered, they would come after Freddy. Fearing for his life, Freddy Bonadonna fled the city in February of 1977, about a month before the explosions occurred on the River Quay.

The explosion on March 27, 1977 leveled two bars in a building that Bonadonna and his brother owned.  No one was hurt by the explosion, but a federal agent said that 10 times as much of the explosives needed to blow the place up was used and deduced it was meant to send a message.  This was the first of many crisis to strike the River Quay, but got the ball rolling. Fred Bonadonna would go on to testify against Joe and Willie Cammisano and be placed in witness protection.

The Mafias “war for control” ended up destroying River Quay with an explosion on March 27, 1977 that ultimately leveled two bars and basically stemmed from conflict between one man, Bonadonna, and the Mafia. This site shows the struggles between business owners and the Mafia. The original business owners wanting a family-friendly area and the Mafia essentially wanting to turn River Quay into a red-light district.  The Mafia's fight for the control of the area, and the violence they used to do so, ended one of Kansas City’s most popular destinations and tarnished its legacy. The name River Quay is hardly mentioned by any Kansas City native, unless suggesting a cup of coffee from a local coffee joint known as Quay Coffee.

KC Business Journal: Trozzolos reflect on the rise and fall of the River Quay