On November 5, 1916, sheriff Donald McRae and a crew of armed citizen-deputies, all locals of Everett, Washington, assembled at Everett's passenger dock to oppose a landing of workers from the International Workers of the World (IWW). The Wobblies, as members of IWW were called, were to arrive in Everett from Seattle on two passenger vessels, the Verona and the Calista, with the explicit purpose of speaking on a soapbox on the corner of Hewitt and Wetmore, a known public speaking place. As the ships attempted to dock, sheriff McRae attempted to prevent the landing. Suddenly, from somewhere, a gun went off. A firefight erupted, killing at least 5 on the Verona and injuring 27. These events became known as the Everett City Massacre. The IWW members were charged with murder, charges which were dropped after a lengthy and highly publicized trial. 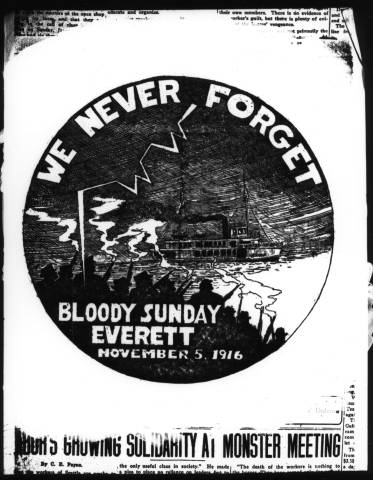 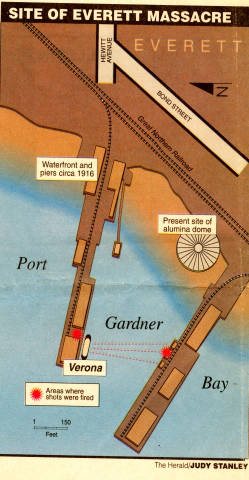 The Verona, re-enacting the event 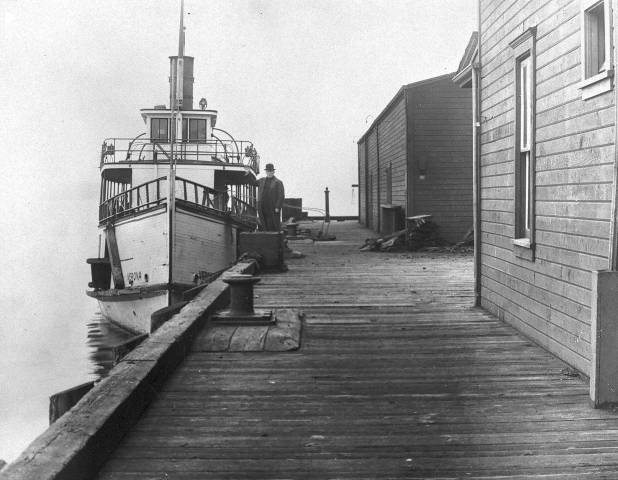 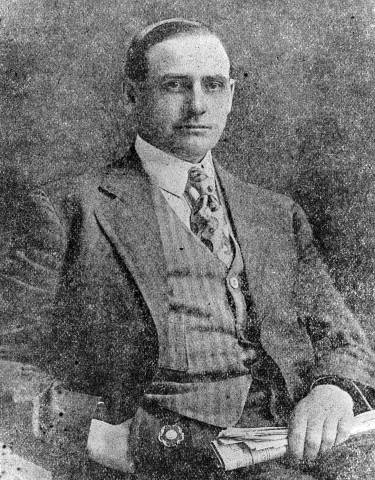 Everett, Washington is a town north of Seattle on Port Gardner Bay. It is a logging town incorporated in 1893. Everett's early history bears a long trail of industry, capitalism, and labor. Legend holds that the town is names after a boy names Everett, whom investing prospector Henry Hewitt observed asking for more dessert, whereupon he said "We should name our city Everett. This boy wants only the best, and so should we." Like many frontier towns in the American Northwest, industrial investments in Everett centered around timber. Railroads brought capital and markets for the timber mills. Early Everett industrialism is characterized by a frantic and energetic enthusiasm for financial developments which prove to be tenuous.

The International Workers of the World was a labor union founded in 1905 in Chicago. It was "One Big Union", for all industrial workers. As a union it was radically decentralized and unhierarchized. One of the IWW's great successes in the Pacific Northwest was in Spokane, Washington, where ordinances had been passed forbidding speaking in the street, with the exception of the Salvation Army. In protest of this, hundreds of IWW Wobblies descended upon the city and began speaking on soapboxes. Each time someone would get up and start speaking, the police would seize them and immediately arrest them, however another Wobbly would already be speaking. Eventually Spokane's jail was full of IWW members, and yet the speakers kept coming. The city relented, and the ordinance was repealed.

In Everett, a continuing strike by the Shingle Weaver's Union was proving to be ineffective. The union's power appeared to be weak in Everett, which prompted the IWW to move in. The IWW sent orators and officers up into Everett from Seattle, in an attempt to increase the power of the IWW in Everett, and (hopefully) to lead the workers in a successful movement. Resistance to the IWW was immediate in Everett, both because of their reputation as radicals and from a fear of outsiders. The IWW was marched out of town by sheriff McRae and his deputies. The more they were repulsed, the more intent the IWW was to force its way into town and do its business. Their aim was to accomplish more or less what they had done in Spokane; by means of numbers and perseverance to more or less peacefully insist that they be allowed to speak openly, recruit, and organize. Soon something of a blockade had developed around Everett: any group of Wobblies found in the city would be arrested, possibly violently, and run out of town.

The climax of a series of increasingly nasty encounters between the IWW and sheriff McRae was a plan to bust open the blockade once and for all by boarding two passenger ships, the Verona and the Calista, and making something of a real landing in Everett. A call was sent out for 2000 Wobblies to converge on the city on November 5th, which brought some 250. The event was planned and publicized beforehand. Sheriff McRae and his deputies prepared to repel the landing with a show of force. It was probably his intention to simply intimidate the workers into going away. With the deputies, the sheriff, a large crowd of curious onlookers, and two ships heavily laden with passengers, there was a fervent mess of human activity.

As the Verona came in to dock at the pier, McRae asked boldly "who's your leader?" The response was "we're all leaders!" McRae then shouted "you can't land here!" to which the response was "the hell we can't!" At this moment someone fired a shot (it is unknown who). What specifically caused this individual to shoot is unknown, but the effect was clear. Men both on board the vessel and on shore were armed. The deputies began firing upon the boat, and the Wobblies on the boat fired back. All in all, 5 on the boat were killed, and 27 were wounded. Some of the wounded and dead tumbled out of the boat and into the water, rising the death toll as high as 12. On shore, at least 2 were killed, with 20 more injured.

The surviving IWW members were charged with murder, although these charges were later dropped after a highly publicized trial. Like many events involving large numbers of only loosely organized people, discovering what happened and who was responsible is very difficult. The event occurred because of a convergence of social, political, economic, and informational forces, tracing the precise trajectories of which can be very difficult.

Courtesy of the Everett Public Library

Created by wesley (Instructed by Catherine Smith, University of Wisconsin-Madison) on December 6th 2019, 3:45:47 am.