From the mid 1960s until Roe v. Wade legalized abortion in 1973, a group of Chicago women provided women with referrals to reputable “abortionists.” Formally known as the Abortion Counselling Service of Women’s Liberation, the group is better known by their code name, “Jane,” or “the Jane Collective.” Jane began as a referral and counseling service, and volunteers eventually learned how to perform abortions themselves in order to better serve the women who called them for help. Jane was largely based in the Hyde Park neighborhood, operating out of the apartments and dorm rooms of volunteers. 5120 Hyde Park Blvd is the address of the first apartment the group rented, under an assumed name, in 1971. (A note: the language used in this Clio entry reflects that used by members of the Jane Collective. Non-binary and trans people with uteri can experience pregnancy along with cisgender women.) 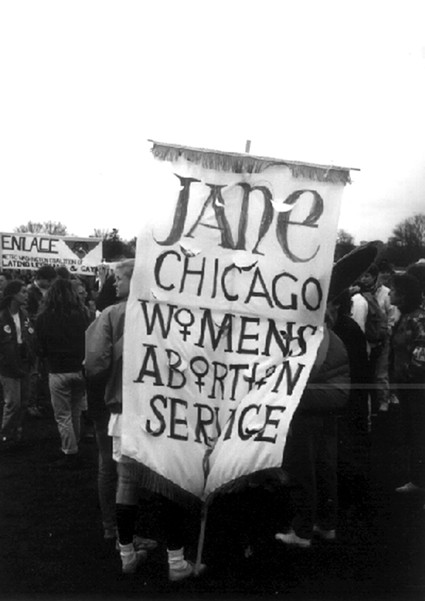 Before Roe v Wade passed in 1973, it was difficult and dangerous to procure an abortion. Legal, medically necessary abortions ordered by a doctor and approved by a hospital board were extremely rare, and there are many cases of women who were unable to obtain the procedure despite their pregnancies causing severe, life-endangering health issues. The only option was to go to underground providers, many of whom charged exorbitant fees, operated in unsanitary conditions, and sexually harassed their patients. But women were desperate.

In 1965, 19-year-old University of Chicago student Heather Booth heard from a friend whose sister was pregnant and desperately trying to find a doctor who would provide an abortion. Booth asked around and, through an acquaintance in the Civil Rights movement, got the phone number of a trusted doctor. Word quickly spread that she knew a doctor who would help women “in trouble,” and soon Booth was receiving more phone calls than she could manage. She recruited a few volunteers from women’s liberation meetings to help, and they formed the Abortion Counselling Service of Women’s Liberation (“the Service” for short). They decided to use the codename “Jane” because it was an everywoman’s name. One member of the group volunteered her home phone number as “Jane’s” number, and as word spread, phone calls poured in asking for “Jane.” Many of the founding members of Jane lived in the Hyde Park neighborhood, where they held meetings and took phone calls in their apartments and University of Chicago dorm rooms.

At the time, there was very little information available about abortion or about women’s reproductive health in general, due in part to outdated Comstock laws that prohibited the spreading of “obscene” materials and information. The Janes (as they were sometimes called) had scoured the library for information that could help them counsel the folks who called, but found only a few references in medical books. The counsellors had to rely on their own experiences and those of the women they referred. As the group expanded and core members developed their relationships with the abortion providers, they learned everything they could about the procedure. They also developed relationships with doctors who didn’t perform the procedure, but were willing to see women for follow-up care if necessary and to teach the Janes more about reproductive healthcare. The Comstock Laws also prohibited helping someone procure an abortion by providing a referral. Everyone involved understood that what they were doing was against the law, and felt strongly enough about it that they were willing to risk arrest in order to help other women. The Janes viewed abortion as a critical issue for women’s liberation: they were “for every woman having exactly as many children as she wants, when she wants, if she wants.”

Word spread through Chicago’s women’s liberation groups and beyond that women in need of abortion could call “Jane.” They placed ads in alternative newspapers and student newspapers: “Pregnant? Don’t want to be? Call Jane: 643-3844.” To contact the Service, a woman would call the number and leave a message asking for Jane, being careful not to give too much detail. One of the Janes would call back, saying something along the lines of, “This is Jane from women’s liberation returning your call. We can’t talk freely over the phone, but I want you to know that we can help you.” They would then set up a time to meet in person for a counselling session, letting the woman bring up the subject of abortion first. The Janes kept their tone kind, yet professional and matter-of-fact. They sent women who had the means to travel out of the country or to states with more lax abortion laws, but the majority of the women who came to Jane could not afford to travel. Many could barely afford the procedure, and were encouraged to borrow from their social networks or sell whatever they could. Later, someone with fundraising experience joined Jane, and they established an abortion fund with donations from wealthy connections in the Women’s Liberation Movement.

When the Janes discovered that at least one of the providers to whom they’d been referring women was not in fact a doctor, they realized that if he could learn how to provide abortions safely, so could they. They began operating out of a “front,” an apartment where women and those accompanying them (friends, children) could wait. The procedures took place in apartments separate from the “front,” at undisclosed, frequently changing locations. Following an abortion, the woman would be given the phone number of a doctor who could perform follow-up medical care if necessary. The Janes performed close to 11,000 abortions, and none of their patients died. Furthermore, the Jane Collective operated on a sliding scale, making abortion not only safe, but accessible.

Many sisters, wives, girlfriends, and daughters of police officers were referred to Jane, leading the group to believe that, as long as no one was seriously injured or killed by one of the procedures, the police would continue to look the other way. But in 1972, Jane was raided by the Chicago Homicide Department (abortion fell under their jurisdiction at the time). Six Jane members were arrested at the apartment where they were performing abortions, with one more arrested at an apartment on Everett Street in the Hyde Park neighborhood, which was likely being used as the waiting room/front. The police officers reportedly kept asking, “Where’s the man?”, expecting to find that a man was performing the abortions.The seven Janes arrested were held in jail overnight, then let out on bail until they would face trial. While the “Jane Seven” were preparing for trial, the rest of the Janes continued to do the work. The highly-publicized trial was delayed several times, and by the time the case was set to go to trial, it was dismissed: Roe v. Wade had passed, making abortion legal. Jane’s services were no longer needed.

Starting at the DuSable Museum of African American History, this trail moves north to include a variety of monuments, markers, museums, and other landmarks related to women's history. This trail is a work in progress; more entries will be added soon.