Pier 39 is a center for shopping in northern San Francisco, located directly next to the San Francisco Bay facing Alcatraz Island. It is a haven for people out and about, and also for the friendly sea lions that bathe in the sun on the docks. Ever since it was opened, the number of sea lions that sunbathe on the pier has increased, leading to large groups of blubbery animals loafing about. It also has a small aquarium where you can learn about a lot of the types of fish that reside close by. If you are ever in need of any food, candy, sports memorabilia, or carnival rides and stage performances, make sure to stop by. This is the Bay, though, so don't forget your jacket, it is almost always very windy and cool.

A view of the pier from the second floor. 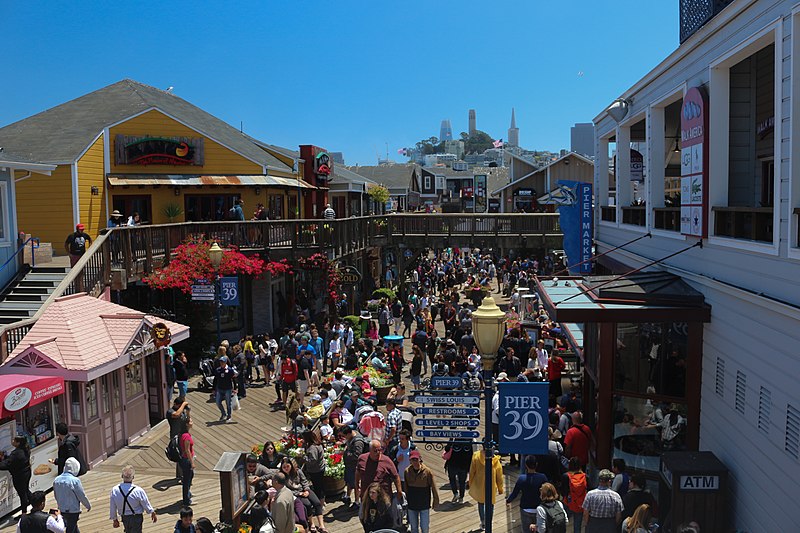 Sea lions sunbathing on the platforms that are provided for them. 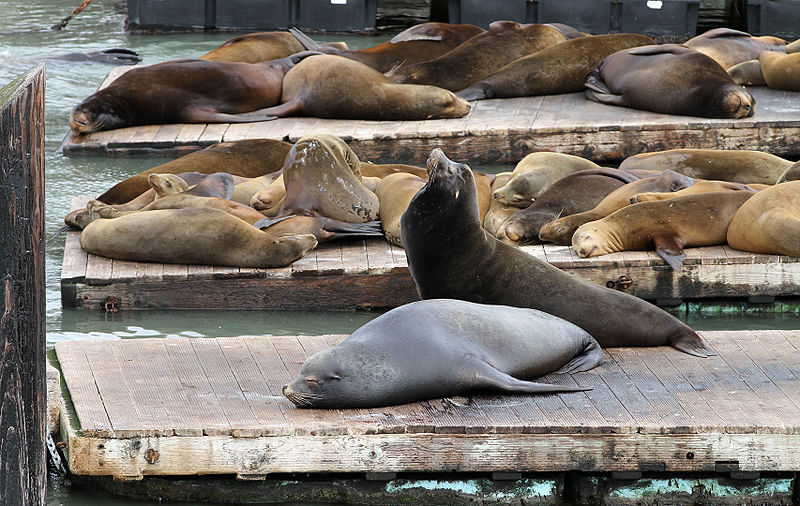 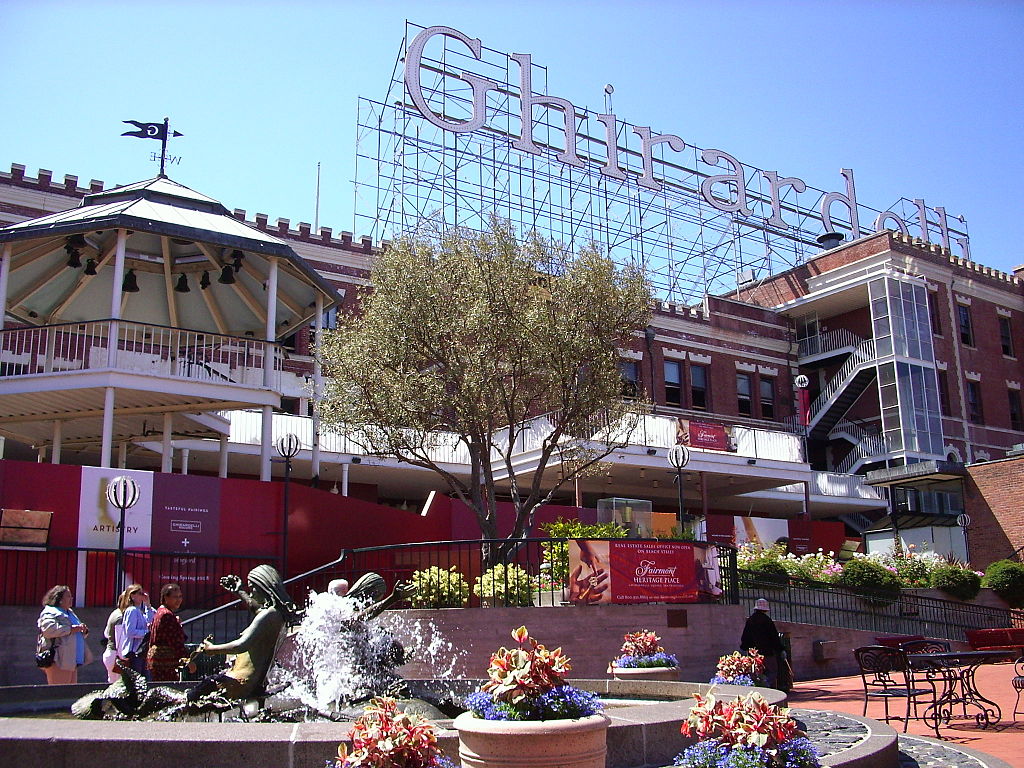 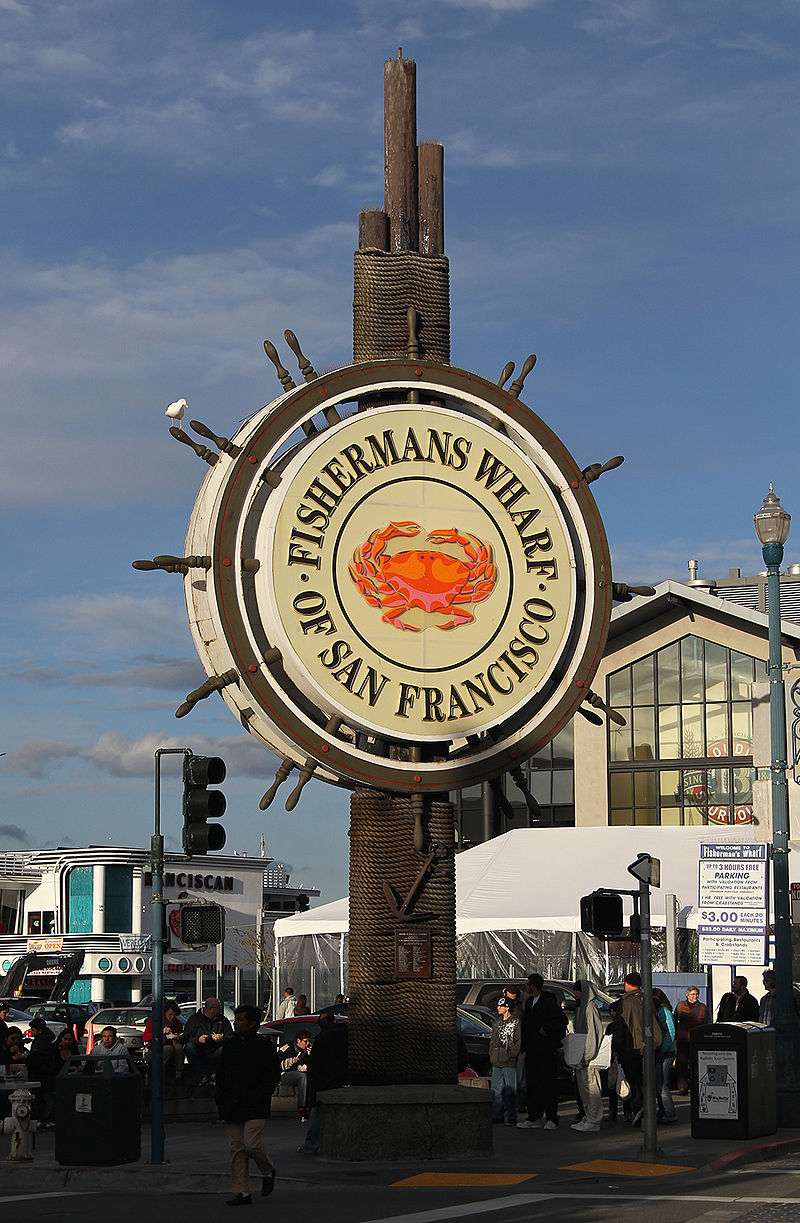 Pier 39 is a waterfront attraction on the San Francisco Bay, and is right next to the Embarcadero. It was opened in 1978 and originally featured 50 stores, 23 restaurants, and a diving pool, which was replaced by a carousel a few years later and eventually replaced by a two-story Venetian carousel that was hand-crafted in Italy and covered in paintings of landmarks from around the city of San Francisco. It still stands in the center of Pier 39. Right after the pier opened, many cruise companies decided that this would be a premier location to host their businesses. The waterfront and specifically the northern piers became a prime location for sailing tours of the San Francisco Bay. Pier 39 gained popularity and by 1989 it was named the third most visited attraction in the United States by USA Today. Over the years, more and more attractions were added to Pier 39, but some of the initial restaurants are still there today. In 1996, both the aquarium and the Bubba Gump Shrimp Company opened on the pier. In 1999, a floating restaurant, named Forbes Island, was added to the roster. It was the only restaurant in the world that was built to sit on top of the water itself, and part of the dining area was actually underwater.The restaurant had many hazards that closed it down over the years, but after many shorter closings, it finally shut its doors for good in 2017.

The pier is home to many marine animals, but the most popular animal that resides there is the California sea lion. The sea lions started to migrate to the floats provided by the pier after the Loma Prieta earthquake of 1989. Because the bay is much shallower and safer near the pier, compared to the small islands that can be found around the Bay, the sea lions began using it as their permanent place of residence. An astounding 1,700 sea lions visited Pier 39 in November of 2009, which forced the addition of six new floats to accommodate the growing number of sea lions that stop at the pier. The Bay and specifically Pier 39 has become a home for marine research, including the Sea Lion Center, which is dedicated to educating visitors on the habits and life of the California sea lion.

The entirety of the Embarcadero is lined with stores and shops that are mostly tourist traps, but also include local shops where amazing deals can be found on a multitude of items. Right next to Pier 39 is Fisherman's Wharf, which is San Francisco's premier location for sea food. Food is brought in fresh from the Bay daily and is served fresh and fairly cheap. A quick walk from the Pier includes the Ghirardelli Square, one of the biggest chocolate producing companies in the United States, which can make for some fantastic experiences for your taste buds. There are many reasons why Pier 39 has been one of the top attractions in San Francisco for the last few decades since it opened up.

Created by Adam LaFond (Instructed by Sharon Wood, University of Nebraska at Omaha) on December 7th 2019, 1:37:58 am.