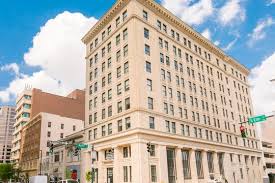 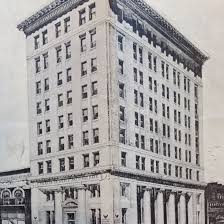 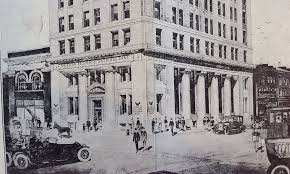 Hughes was commissioned by the bank to design a new building, and in 1920 the building was constructed on North Elm street, making it the tallest building in Greensboro at the time. This building followed a general trend of having the operations on the lower floors and rentable office spaces in the upper floors. Because of its success, Greensboro architect Richard Burton was asked to build an additional annex at the east end of the building in 1927. This made the building take its “L” shape, wrapping behind the building.

Following the economic recession of the 1930’s the industrial and banking boom began to fade. The bank was taken over by the North Carolina Bank and Trust Company in 1929. On March 4, 1933, President Roosevelt declared a National Bank Holiday across the country, closing all banks, which allowed Congress to work on passing banking rules and regulations. Only two banks in Greensboro ever opened their doors again after that, and the North Carolina Bank and Trust Company was not one of them. They ceased operations on March 6, 1933.

Investor Ben Cone bought the assets of the Southeastern Realty Company one month later, which included the American Exchange National Bank Building, which is when the building became known as the Southeastern Building. It housed many different offices and businesses at that time. Since that time, the building has been increasingly modernized. In the 1940’s local architect Jack Pickens Coble was a part of this redesigning effort. The building had various owners and tenants in the late 20th century and was most recently purchased in 2005 by the 102 N. Elm Street Associates LLC. Places on the National Register of Historic Places in 1982, the Southeastern Building stands as a remnant of the past and testament to the present.