Built on a bluff overlooking the Salmon Falls River, Hamilton House is the former country estate of merchant Jonathan Hamilton that was built between 1787 and 1788. Hamilton earned his fortune as a privateer during the American Revolution and later became a ship builder, owner of a lumber company and sugar plantation in the West Indies. The home was later purchased by Emily Tyson and then bequeathed to the Society for the Preservation of New England Antiquities (now Historic New England) by Tyson’s stepdaughter, Elise Tyson Vaughan, in 1949. Historic New England then restored it to its early 20th century appearance and opened it as a historic house museum with formal gardens, a purpose it serves to this day. It was designated a National Historic Landmark in 1970.

Hamilton House has existed at this spot for well over 230 years. 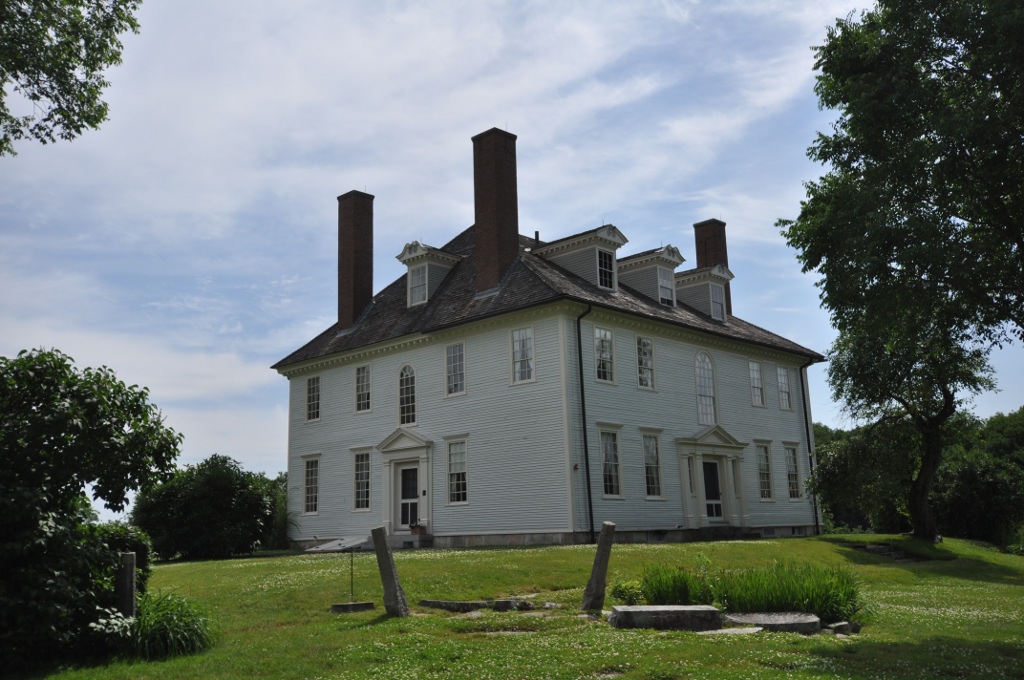 Emily Tyson and her Stepdaughter, Elise, added the gardens in the early 20th century which have since been rehabilitated. 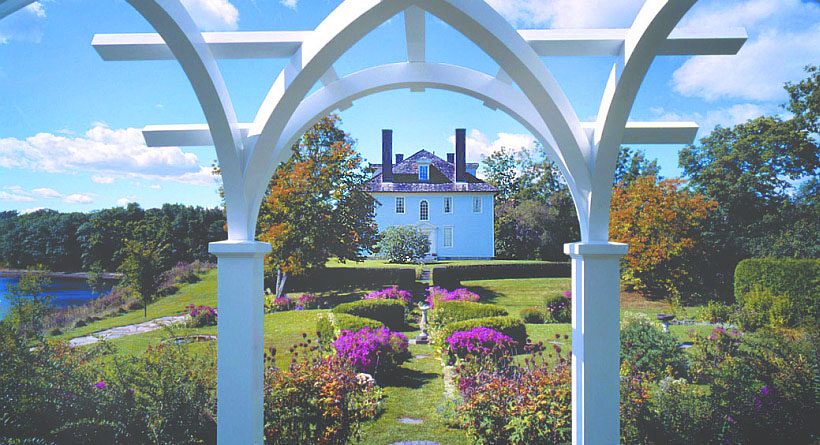 One of the murals within the house originally painted by George Parker Fernald. 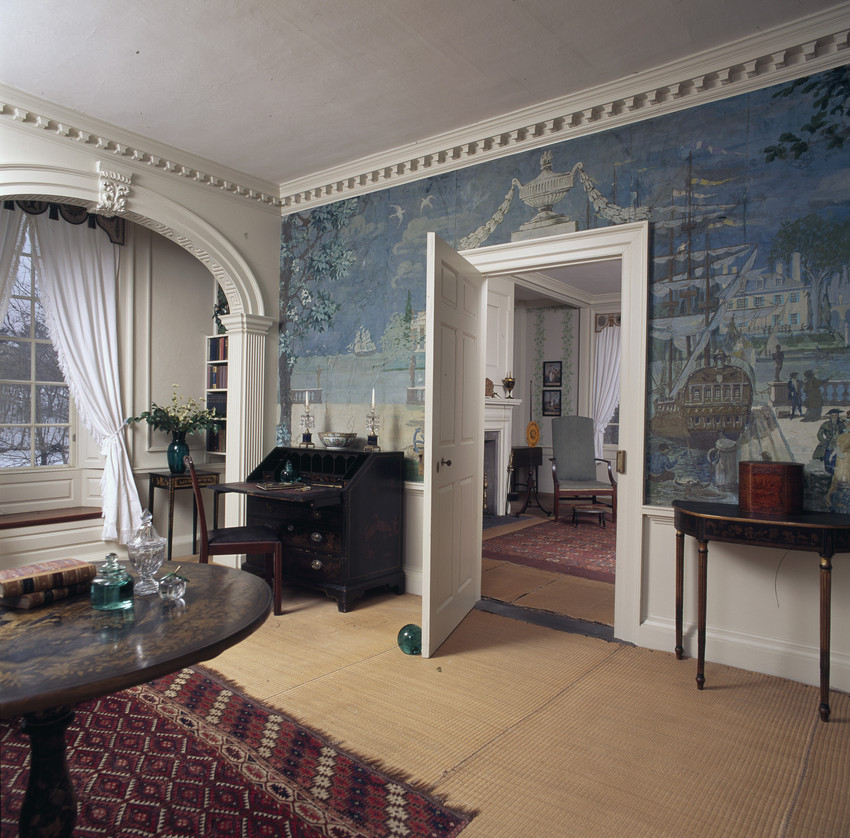 Hamilton House as seen from the Salmon Falls River. 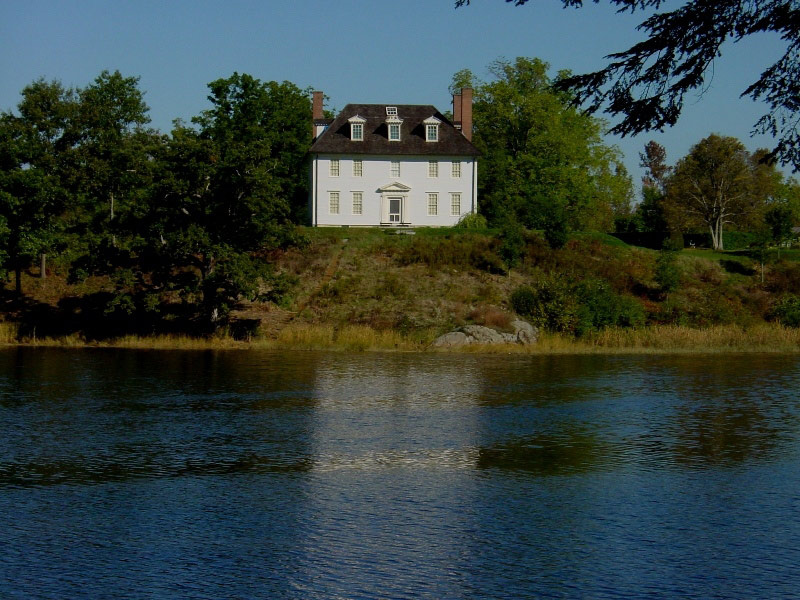 The Garden Cottage which now serves as the property's visitor's center. 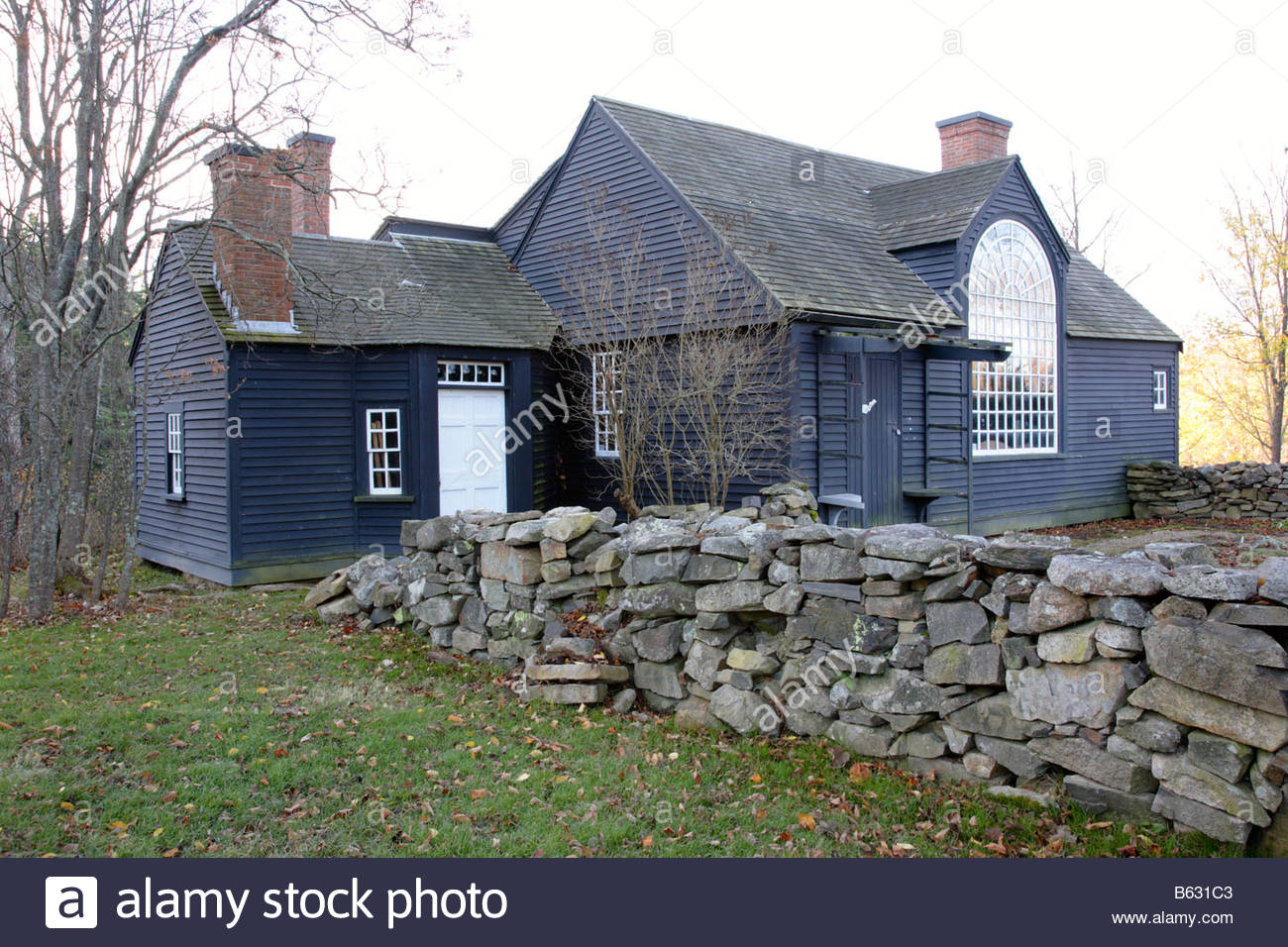 Jonathan Hamilton, born in what is now Berwick, Maine, while it was still part of Massachusetts, purchased the land upon which he would build his grand home in 1783, at the end of the American Revolution. A merchant by trade, Hamilton risked a great deal as a privateer during the Revolution and was rewarded with large sums of money. The land he purchased, then known as Pipe Stave Landing, already contained a wharf and ways for ship building. It also provided him with a sweeping view of his merchant operations once completed. Eventually, Hamilton expanded his merchant operations into ship building, investing in local mills, and operating a sugar plantation on the island of Tobago in the Caribbean. The ownership of the plantation brought Hamilton to deal in the slave trade as well.

Hamilton’s large, 2.5-story, wood-framed home was completed in 1788. It featured a hip roof, clapboard siding, four symmetrically placed chimneys, gabled dormers, and three separate entrances. Inside, the home featured a typical, Georgian central hall plan with rooms on either side. The two parlors and dining room contained mahogany window seats and folding interior shutters were added to the windows.

After Hamilton died in 1802 his merchant business fell into decline due to the questionable business acumen of his sons, President Jefferson’s embargo of 1807 and the War of 1812. The latter two of the three reasons severely restricted American trade. In 1811, Hamilton’s sons sold the property to their sister, Olive, and her husband, Joshua Haven. The couple lived in the house until 1815 when it was purchased by Jonathan Hamilton’s business associate, Nathan Folsom. Folsom, it is thought, leased the property, and it is entirely possible it sat vacant for a time, until he sold it to Alpheus and Betsy Goodwin in 1839. The Goodwins operated an agricultural and sheep farm on the property; planting orchards, enclosing fields and adding a barn to the property.

During the Goodwin’s tenure, the house fell into disrepair and in 1898, celebrated American author, Sarah Orne Jewett, convinced her friend, Emily Tyson, widow of the former president of the Baltimore and Ohio Railroad, to purchase the property. Emily Tyson, along with her stepdaughter, Elise, restored the house with the assistance of architect, Herbert Browne, in a Colonial Revival style. Over the next 50 years, the Tysons updated the home’s elaborate wallpaper, enlarged the dining room, added two small wings, and a fourth entrance. They also removed the sheep fences, built a garden cottage (which now serves as a visitor’s center), and planted formal gardens. Jewett also featured the estate in her romantic novel, The Tory Lover. Emily Tyson died in 1922 and Elise Tyson Vaughan in 1949. Elise willed the property to an organization that would become Historic New England, which currently owns the house.

Beginning in 1950, Historic New England restored the home to its early 20th century grandeur, removing the additions and fourth entrance. They also replicated the interior’s ornate wallpaper, restored two large murals commissioned by the Tysons, and displayed the antique furnishings and decorative arts, such as hooked rugs, the ladies collected. Finally, they restored the property’s perennial gardens and landscaped the property. The grounds are open year round and the historic house museum is open daily from June 1 – October 15 with tours offered on the hour. The property is also available for rental, primarily for celebratory occasions.