The Miller House was built in 1905 by prominent entrepreneur Elmer Miller as a luxury home for he and his wife. When the plans for the house were shown to the public, the local paper referred to it as “a model of beauty, elegance, and convenience throughout.” J.W. Whitehead served as the architect for the building, which included 1,800 bricks. After the passing of the Millers, the residence passed through multiple owners, and was named a Kentucky Landmark by the Kentucky Heritage Commission. In 2006, Larry and Jeanne Kirk bought and restored the house. It is now a restaurant and bourbon bar.

The Miller House as it stands in 2019 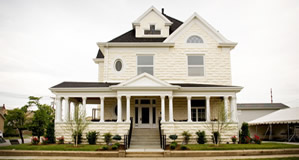 In 1905, businessman Elmer Miller commissioned the construction of his new house. Miller was a Whitesville native who began his career weighing coal, and went on to build his own coal company before entering the transfer and hauling business. As an eminent Owensboro citizen, Miller built a grand home, costing $8,000, that beﬁt his status. The house was made from 1,800 artiﬁcial stone brick, which Miller made himself. It was originally a red brick house, with large front and side porches. Pillars support the front porch, which was called one of the prettiest features of the house by The Owensboro Daily Inquirer. A large reception hall, as well as a parlor, and dining & breakfast rooms, were on the ﬁrst ﬂoor. The second ﬂoor contained the bedrooms, and bathrooms. The bathroom was laid with tile, with hardwood ﬂoors covering the rest of the house. The whole house had wooden mantels and tile hearths, which was considered an extravagance for the time. The basement was of particular interest to Miller. As an enthusiastic billiard player, he had a large portion of the basement set aside as a billiard room for him and his friends. A large hallway separated the room from the cellar and coal & furnace rooms, and the entire basement was laid with concrete. Next to the house was the carriage house, where they kept their automobile.

The Millers were both involved members of Owensboro society. Elmer was involved with the Masons, the Rotary Club, and the Chamber of Commerce, while Lizzy served in the Women's Club and the Red Cross. Both were active in their church.

Miller died in 1922, and his wife Lizzie stayed on at the house until her death in 1949. The couple had no children, so the house passed to one of her nieces. During the ‘70s, and early ‘80s, the house served as an apartment building. Eventually, the buildings became derelict, and the carriage house was tom down due to its neglect. Facing demolition, the house was bought and restored in 2006 by the Kirks. In 2007 a tornado struck the downtown area of Owensboro, and the building sustained extensive damage. More repair was necessary. The main house is now a restaurant, while the former billiards room in the basement is now a bourbon bar.