Olympia Union Hall is a rarity in the Southern U.S. - a building associated with a union for textile workers. Built by 1946, the corners of the building and the center bay of each exterior wall are buttressed, giving the structure a fort-like appearance, ready for battle with its members' employers. The structure was listed in the National Register in 2017 for its association with a local chapter of a textile workers union which was established in 1939 amidst the uncertainty of the future when Olympia Mill was being sold. The former mill owners had not only built a village of houses for its workers, but provided schools, churches, and parks. The building housed offices and meeting space for the local chapter of the union until it closed in 1996, when the decline of the U.S. textile industry brought an end to the local chapter's purpose. 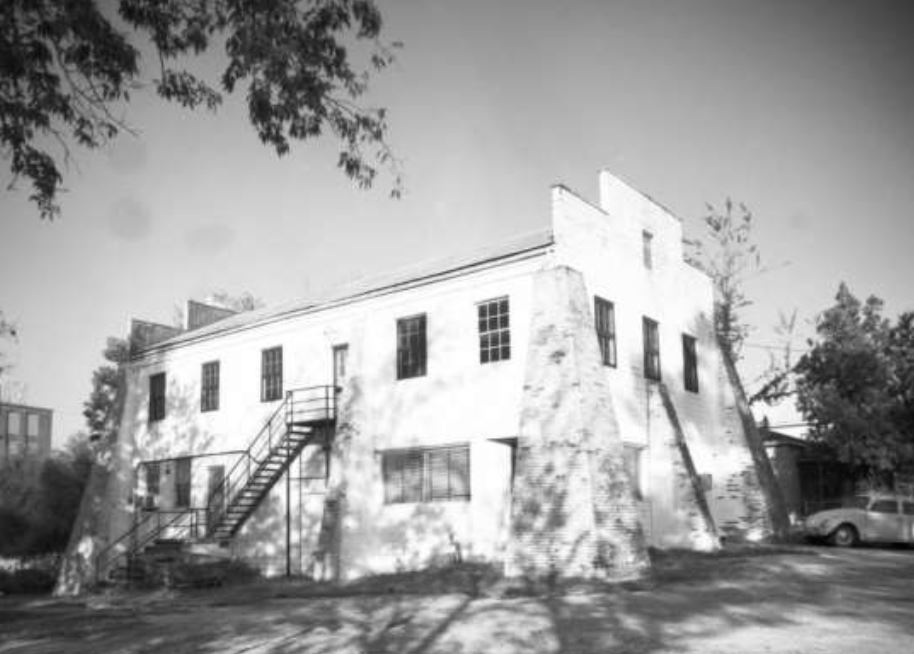 Olympia Union Hall was built in the mid-1940s in the midst of two textile mill villages, Olympia and Granby. Constructed of concrete blocks, heavy brick buttresses at the exterior corners and on either side of the center bays of the facades give the building a unique look that does not fit a particular architectural style. It is difficult not to see the resemblance to a fort, however. Some of the first-floor window sills contain grates. The gabled roof is hidden by stepped end-walls and the main entrance is through double wooden doors in the building's southeast corner, beneath a corner buttress.

The surrounding neighborhood retains many of the houses built for textile workers of nearby Olympia Mill in a "mill village." Olympia Cotton Mill was built in 1899 by the firm of Whaley and Company. One of three mills in Columbia run by the firm, the trio was known collectively as the Whaley Mills. Textile mill workers in Columbia and the state typically earned about 60 percent less than industrial workers in the Northeastern U.S. Progressive ideas touted by labor unions at the turn of the twentieth century like child labor laws found little support in Columbia where families sometimes relied on multiple wages. Wages took a dramatic upturn during World War I, so workers were not looking to stir up trouble. Post-war, a glut of workers and reduced demand led to wage cuts. The Great Depression made the situation worse, and labor activism began to appear in the mill villages. Half of the state's textile workers were members of the United Textile Workers (UTW) union by 1934 when a general textile workers strike was held along the East Coast from Maine to Alabama.

The Textile Workers Union of America (TWUA) Local 254 was organized in 1939; also in that year, Olympia Mills was sold. Once Olympia Mill began to close down operations in 1939, many of the support services provided by the company in the village began to disappear. The local schools, parks, and churches were among the benefits being lost by the textile workers. The company also had provided benefits of a communal garden plot and pastureland. Non-textile workers began moving into the village. The government-run mill created linens and cloth for uniforms during World War II.

Before the Olympia Union Hall was constructed, the local chapter met in the Olympia High School auditorium, which may have been too close for comfort to the Olympia armory and its National Guard troops. Construction of the Union Hall, funded by the local chapter and costing about $11,000, proceeded slowly. The heavy cinder block walls and sturdy brick buttresses seemed to represent the union's commitment to the neighborhood. Local 254 hosted regular meetings in the new union hall in the 1940's and 1950's and served members working at all five mills in Columbia. Meeting spaces were upstairs with offices downstairs. The local chapter provided food for workers during strikes and helped negotiate pension plans. When the mills closed for the Labor Day holiday, the local would sponsor a community cookout.

In 1975, Columbia became the site of the first chapter of the Carolina Brown Lung Association which worked to shine light on health problems experienced by textile workers. The main concern was brown lung disease, or byssinosis; early organizational meetings and health screenings took place at Olympia Union Hall. The TWUA merged with the Amalgamated Clothing Workers of America in 1976, forming the Amalgamated Clothing and Textile Workers Union (ACTWU). Due to the trend of textile mills relocating overseas, the Olympia Union Hall building closed in 1996. The structure was sold to a real estate developer in 1998 who rented the space to artists who renovated the space to use as a studio. The building was used later as practice space for a band and as a home.

Olympia Union Hall was listed in the National Register in 2017 for its local significance in social history from 1946 to 1975 and its association with the TWUA Local 254. It is evidence of the struggle between textile workers and mill management, and the mill workers' efforts to organize to defend their rights. The building was vacant by 2012 and still vacant in 2016.

This drive along the western edge of Columbia includes former structures dating back to the antebellum era and the remnants of massive brick structures from the late 19th and early 20th century and concludes at a nearby museum. All of the entries on this tour are east of the Congaree River in Columbia