This historical marker recognizes the presence of thirteen trees planted in 1896 within the Colonial Trees Grove in Golden Gate Park. Each tree hails from one of the original thirteen colonies of the United States of America. The trees were planted in October 1896 by the Sequoia Chapter of the Daughters of the American Revolution (DAR). In April 1920, the Colonial Trees Grove was commemorated with a bronze plaque historical marker mounted onto a boulder. The grove stands nearby to the Pioneer Log Cabin and the Pioneer Mother Statue, which is the only statue of a female figure in Golden Gate Park. The Colonial Trees Grove is situated just south of John F. Kennedy Drive and North of Stow Lake. The historical marker is located at the intersection of Stow Lake Drive and John F. Kennedy Drive and it will appear on your right when approaching the grove from the east. 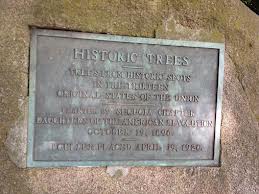 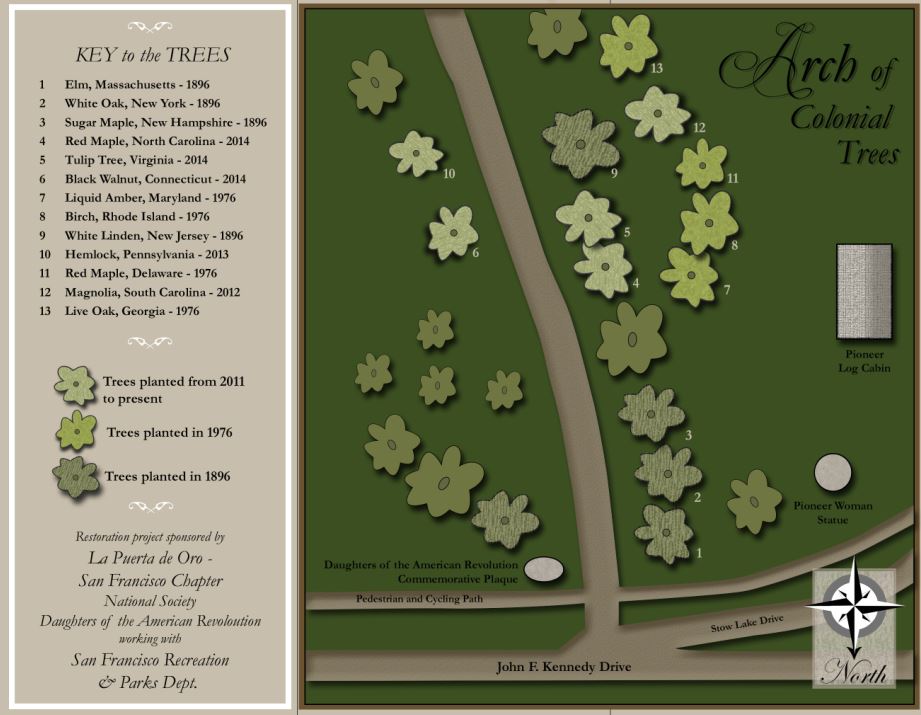 Arch of Historic Trees interpretive signage (The Story of the Trees) 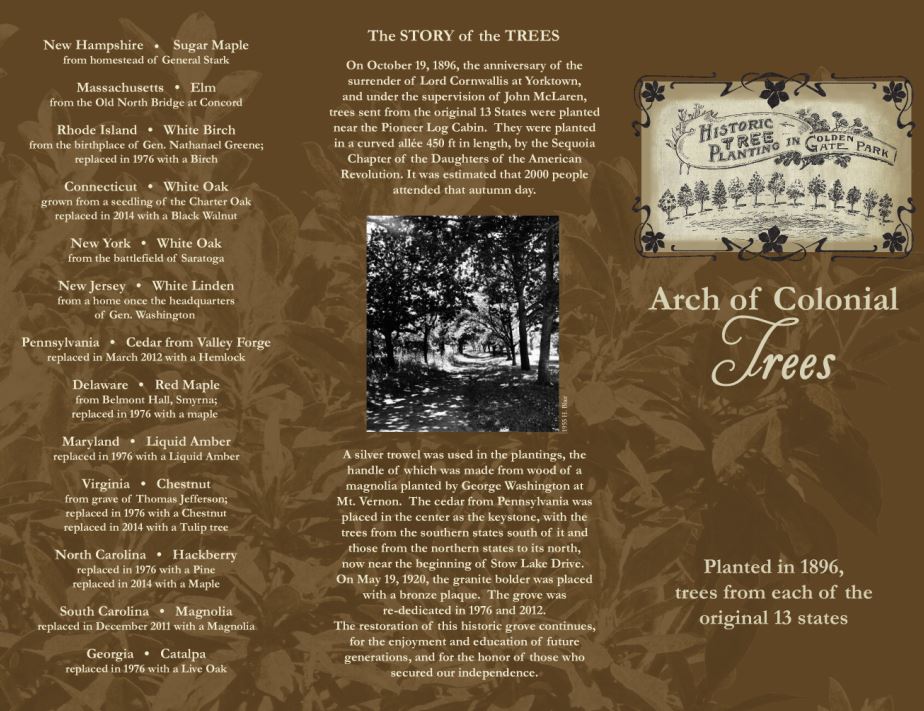 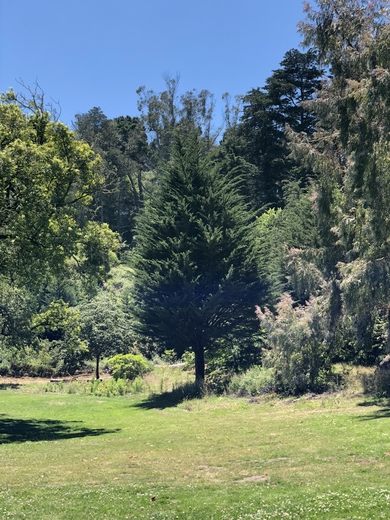 Panorama of all 13 Trees in the Colonial Trees Grove

As noted on the Historic Trees Historical Marker, each tree planted within the Colonial Trees Grove in Golden Gate Park is native to one of the original thirteen colonies (now states) in the United States of America. Each tree planted in this grove also holds unique historical significance reflecting a particular event, figure, or symbol from each of the original thirteen colonies.

First planted by the Sequoia Chapter of the Daughters of the American Revolution (DAR) in the autumn of 1896, some of the trees have since been replaced over the years due to the effects of weather and time. The following significant species of trees were included within the Colonial Trees Grove in Golden Gate Park:

In the center of the Colonial Trees Grove stands a keystone Cedar tree from Valley Forge Pennsylvania. (This tree was replaced by a Hemlock in 2012). The trees from the southern colonies were planted in an arc just south of the Pennsylvania Cedar tree, while the trees from northern colonies were planted in an arc just north of it. The soil that was added to the site during the planting of the Pennsylvania Cedar tree came from the Paris grave of the Marquis de Lafayette, who joined the cause of the American Revolution while gaining the formal support of France and playing a key role in the victory against Britain's Lord Cornwallis at the Battle of Yorktown.

Sponsored by the Sequoia Chapter of the Daughters of the American Revolution (DAR) in October 1896 just after the California Midwinter International Exposition ("World's Fair") earlier that year, it is estimated that some 2,000 people were in attendance to witness and celebrate the planting of the Colonial Trees Grove. While planting the trees, a silver trowel was used, featuring a handle that had been specially crafted from a Magnolia tree which once stood at George Washington's Mount Vernon property. The additional soil that was added to the site during the planting also came from several historic American battlefields that were of particular significance during the Revolutionary War.

The Colonial Trees Grove was further commemorated with a bronze plaque historical marker mounted into a boulder in 1920. The Colonial Trees Grove was re-dedicated in 1976, the year of the U.S. Bicentennial, and again in 2012. Today, this site continues to be maintained for educational purposes as well as for outdoor enjoyment, in honor of earlier generations who fought against Britain in the American War for Independence.