Dedicated in 2018, this historical marker shares the story of a four-and-half mile railroad that was constructed during World War I. After the War Department established Camp A. A. Humphreys, the army needed a way to move thousands of troops and supplies from Washington to the camp. In order to facilitate this operation, the army constructed Fort Belvoir Military Railroad from January to July 1918. Prior to the construction of this rail line, the only way to transport men and materiel to the camp was by steamboat. The construction of the railroad had a secondary purpose, providing a training opportunity for military engineers who would construct railroads as part of their wartime duties. This standard gauge railroad ran just over 4.5 miles and the last locomotive ran on this track in 1993. 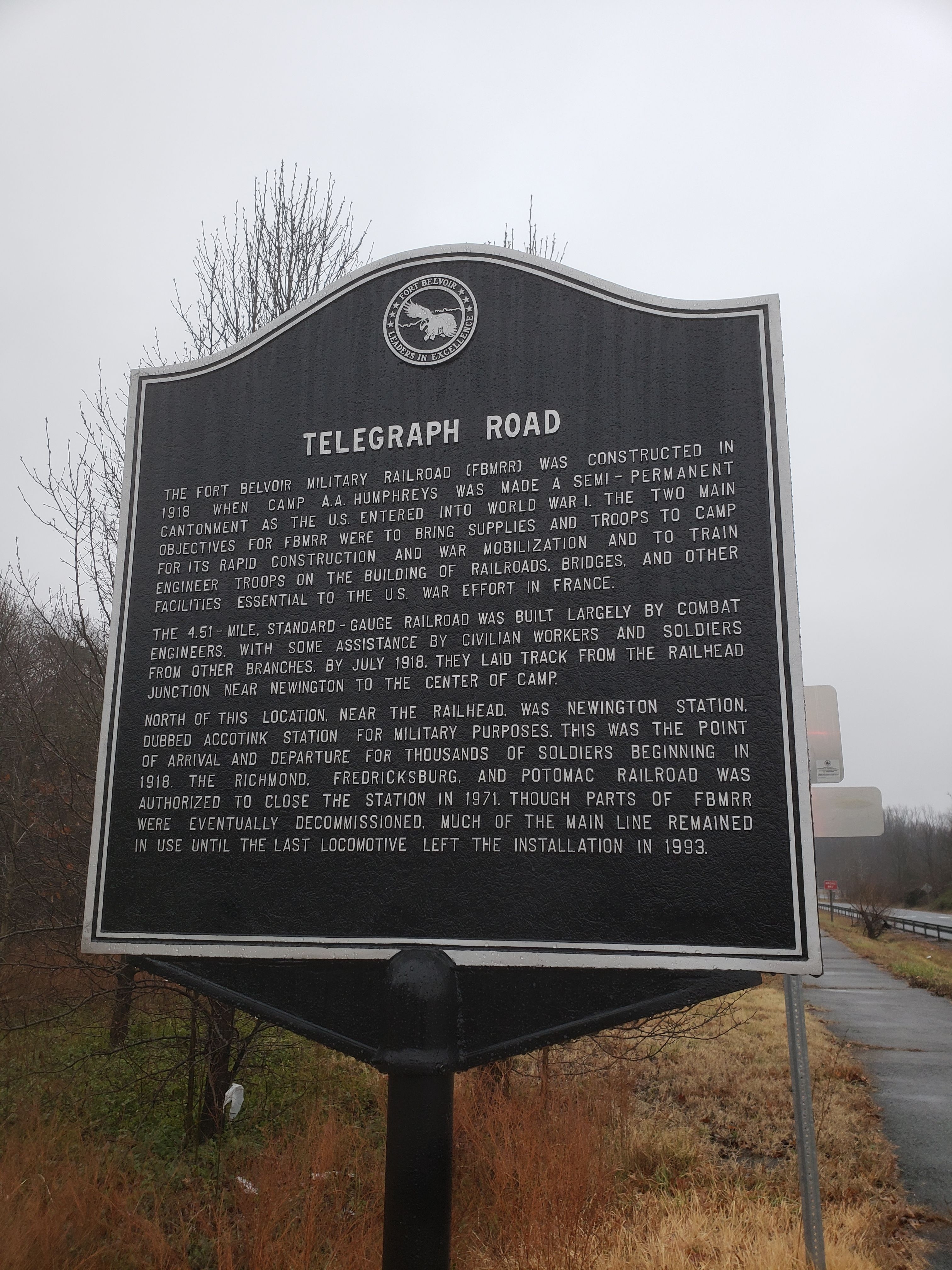 After the United States entered World War I in 1917, the U. S. Army Corps of Engineers decided that all its officers and soldiers would receive training at Camp A. A. Humphreys. As a result, the military needed an efficient way to transport thousands of soldiers and a vast amount of supplies. Prior to the war, the easiest way to get from the District of Columbia to the camp, which stood on a peninsula, was by steamboat. Both military engineers and civilians worked on building the railroad, which ran from Newington Station (also known as Accotink Station by the military) to the center of the camp. Over 30,000 soldiers passed through the camp during the war.

In the 1930s, the camp was renamed Fort Belvoir after the plantation that once occupied the land. The railroad was used for safety testing and coal transport for the military, as well as passenger transportation. Commuter-class train cars were in use until 1948, with passenger service until the end of the Korean War in 1953. The military also made use of Fort Belvoir and its railroad in World War II and the Korean War. Colloquially the train was called the "Accotink Flyer" by soldiers.

In 1971 the Richmond, Fredericksburg, and Potomac Railroad was authorized to close the station. Parts of the line continued to be used until 1993, when the last train ran on the tracks. The Virginia Department of Historic Resources recognized the rail corridor -- rail bed, sidings, rail yards, and associated buildings -- in its Historic Register in 2016. Fort Belvoir and the Federal Highway Administration maintain a historical marker, erected in 2018, near the location of the railroad, at the intersection of Telegraph Road and Fairfax County Parkway.