The Sohmer and Company Piano Factory building was built in the Astoria neighborhood of Queens in 1886. The six-story brick structure features a mansard-roofed clock tower facing the East River. The Romanesque Revival style building was expanded around 1907 and was converted to residential uses one hundred years later. The company moved operations to Connecticut in 1982. New York City designated the building a landmark in 2007 for its relationship to the history of the piano building industry in NYC (Steinway also built a factory in Queens that still operates). The Sohmer and Company Piano Factory building was listed in the National Register in 2014.

2010 photograph of Sohmer and Company Piano Factory by Jim Henderson 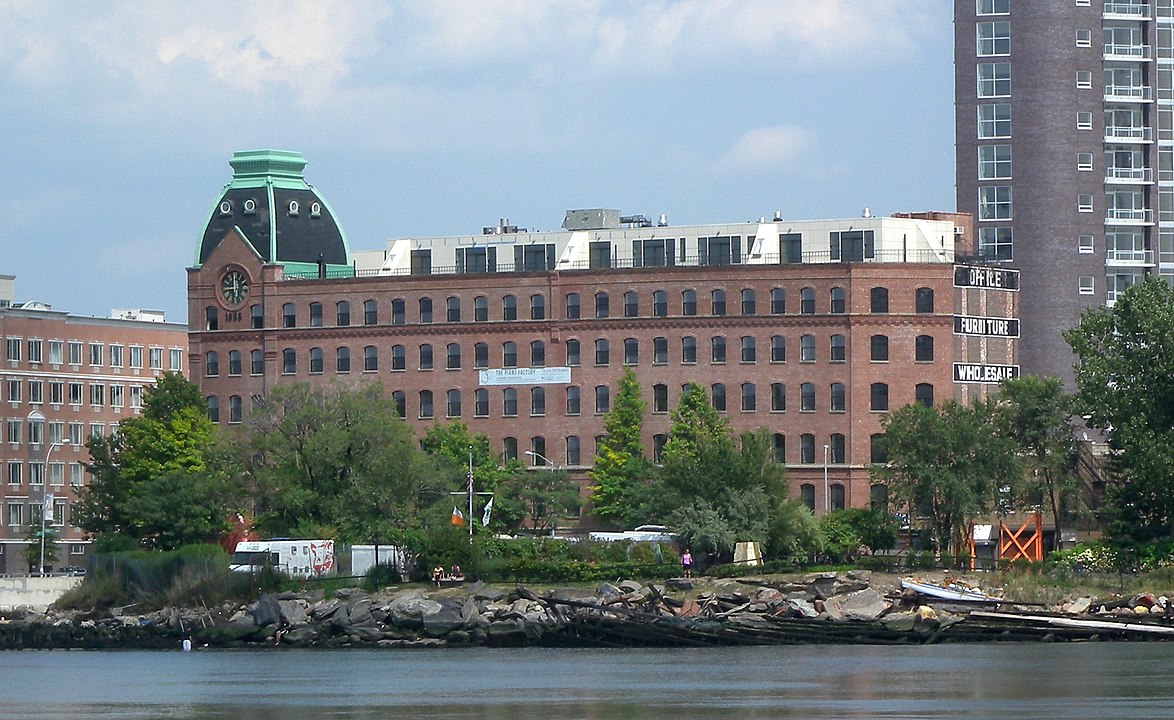 The Sohmer and Company Piano Factory building was built in the Astoria neighborhood of Queens in 1886 by Hugo Sohmer (1845-1931). He and K. Kuder purchased a New York piano company, Mitchell & Mittauer, in 1872. Before the Astoria factory was constructed, Sohmer and Company was in Manhattan on the corner of Third Avenue and 13th Street. In 1872, New York City contained 171 piano manufacturers. Skilled workers would arrive from Germany with their own tools and workbench, and Mr. Sohmer would meet them at the boat with a horse and wagon, according to his grandson, Harry J. Sohmer, Jr. Sohmer and Company was known for their use of elaborate woods and their history of craftsmanship. the company claims to have built the first ever five foot grand piano in 1884. One piano produced in NYC by Sohmer in 1872 soon after the company was founded was still being used 110 years later in Salida, Colorado.

The company was producing around 3,000 pianos per year when it decided in 1982 to leave Astoria for Connecticut. The company had been acquired by a Connecticut manufacturer of piano parts, Pratt-Read. There were no Sohmer's in the fourth generation of the family willing to carry on the tradition in New York. That left only one piano factory in New York City - the Steinway & Sons factory in Queens. The building on Vernon Boulevard was used as storage space and as a showroom for office equipment.

The former factory building was converted to residential uses one hundred years after its expansion, beginning in 2007, with residential lofts in the second through sixth stories. Two new penthouse additions are above the original roof level but set back from the streetside facades of the building, with sliding glass doors leading to a rooftop terrace. The exterior of the building with its distinctive arched windows and brick and sandstone stringcourses was restored as well. Steel balconies were added facing a courtyard with a one-story addition. The first floor features public space.

The building is significant for its relation to the industry of piano making in New York and for its architectural style, considered to be an American industrial interpretation of the German Romanesque Revival style, or Rundbogenstil. The period of significance lasts from 1886 to 1947 when a lack of demand for pianos led to the company leasing out some of the building space. The National Register listing was finalized in 2014.

Explore three historical places near Astoria's waterfront. Start at Vernon Blvd. & 31st Ave. (across the street from Hallett's Cove Beach) at the clock tower of a former piano factory/ now condos. Then walk through Socrates Sculpture Park before crossing Vernon Blvd. to visit the Noguchi Museum.